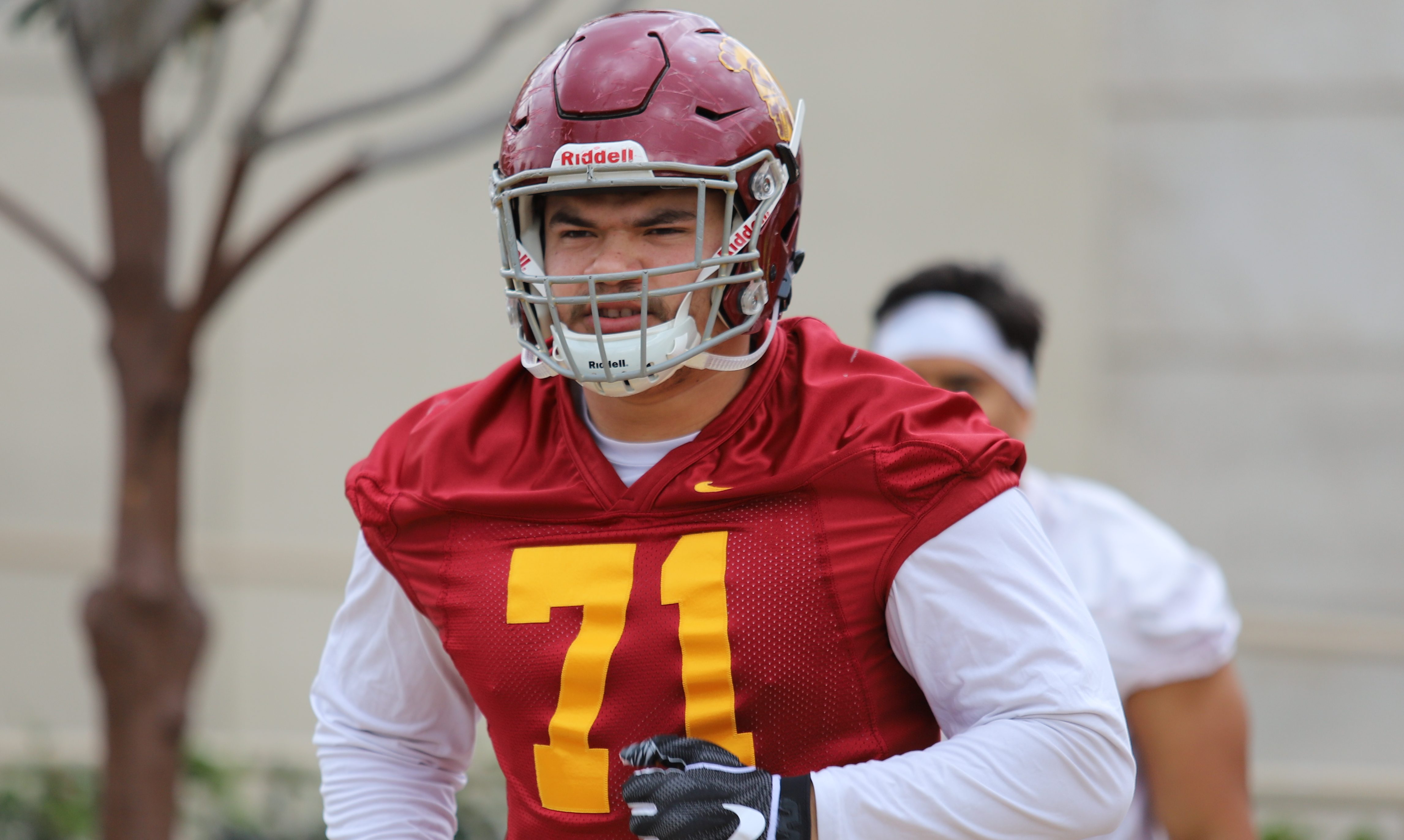 Answering reader questions on topics ranging from depth chart, to backup offensive tackles, to the new offense affecting the defense, as the USC Trojans are set to begin Week 2 of Spring Ball.

Q: When can we expect a updated depth chart with all the position changes?

A: Clay Helton said they will release an internal depth chart every Friday, so each Saturday practice will illustrate any updates to that. But since they didn’t practice on Saturday, today will be our chance to see if there are any changes. I’m not going to read too much into seeing a new starter or a position shuffle after one occurrence, since there will undoubtedly be some moves made for motivational purposes this spring. But if the same quarterback starts consecutive scrimmages, or a surprise starter sticks for more than a week, it’ll be noteworthy.

Q: What’s your impressions of OT Schirmer so far? Many people thought Helton went out on the limb for a guy that has not played much football (or at least there’s not much tape on him). He certainly has the size for a D1 offensive tackle and reportedly he’s pretty strong. But nobody seems to know much about him, except for his past suspension.

A: I have not seen Bernard Schirmer practicing so far this spring (I did see him enter the field in uniform, without a helmet, the first two days) and we have not heard an injury update. It would definitely be nice to have another body out there along the offensive line.

Q: Do you think all the stink about people who gamed the system to get admissions will affect recruiting in the next couple of years?

A: No. At this point that isn’t a football story, and if it stays that way, it won’t have any effect on recruiting. It’s not often that wins and losses are the sole reason for the success or failure of a recruiting class, but that might be the case for USC this year. There is so little time now between the end of the season and signing day, if you have another 5-7 year, it might not matter what you do afterward since you just don’t have those multiple months to build momentum anymore.

Q: Will our new spread offense have adverse impacts on our defense?

A: This is going to be an interesting topic going forward. My initial thought when Helton made it clear that he would be moving to something of an Air Raid system was that the offense has little to do with the defense, so you can recruit and coach at a high level on both sides and be just fine. But after watching a few practices, there is definitely the thought creeping in that when the defense spends this much time going against an Air Raid offense, it’s that much time your defensive linemen are only rushing for a second or two and the ball is out, your linebackers aren’t filling holes and taking on blockers. You are relying heavily on getting a really good, aggressive scout team look each week to keep your defense sharp. Of course, the flip side to that is that a lot of teams run similar systems, so you’d better have some understanding of how to stop it. And Washington State certainly showed tremendous improvements defensively while running an even more pass-heavy version of this offense. My official stance is that you can do enough in practice to maintain a high-level defense while operating this kind of wide open offense, but it’s definitely a situation worth monitoring.

Q: Is there update on Velus Jones’ status (what are the odds that he returns?)?

To what extent is Liam Jimmons a true OL guy? By that I mean, is this a good fit or is it this just to make sure there are OL bodies available should injury happen (and or for practicer purposes)? The flip side to that question is, what is he giving up by leaving the D line? Was he a future starter or at least a ‘Malik Dorton” type of player?

A: No official update with Jones at this point. I think the chances he returns are better than the other transfer portal guys return, but I’d still be a little surprised if any of them are back.

With Jimmons moving to the offensive line, that was a move I didn’t see coming. I thought he could develop into a nice asset along the defensive line. Like you said, having a Malik Dorton kind of impact. It has only been one full pad practice, so it’s tough to read too much into anything he’s done, but it’s not like he’s gone out there and embarrassed himself through one week. He’s a good athlete and I hope the coaches leave him on the offensive line. I think depth is needed there and it’s never a good sign for a player’s development when he’s asked to flip back and forth.

Q: Erik, what seems to be the mood of the team in light of all the off-field problems. Do you get a sense they are able to focus in spite of all the noise?

A: They are all saying the right things and there has definitely been a bounce in everyone’s step through one week. If players are asked about the new issues this week, my guess is they’ll give their versions of a “no comment,” but it wouldn’t surprise me to hear anybody say that they’re taking last year and this entire offseason personally, and they have a mindset to fix it with this football season. With how much players are on social media, I don’t completely buy that they’ve been able to tune out all the noise and chatter, but I don’t get the sense that it’s bringing them down at all. As a team, the Pac-12 South and Conference goals are still there. Individually, NFL goal is still there. They know they still have a lot they can play for.