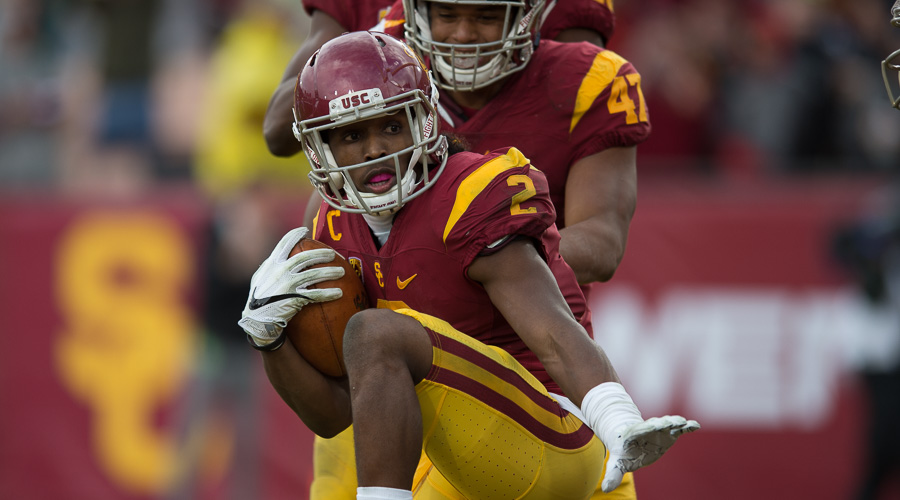 In this week’s edition of the mailbag we talk bowl week practices, Penn State, Stevie Tu’ikolovatu, injuries, and more:

I’m sure you will do an article on the particulars of the bowl season practices, but in looking ahead, which of the younger players do you expect to get extra attention? And will this lead to opportunity in the bowl game, or will it be purely about next season?

When I think about the extra work for young players it’s mostly with an eye toward next spring rather than an opportunity in the bowl game. That can pretty much mean all the redshirts, particularly guys like Matt Fink, who may very well be the back-up next year. I’m looking forward to seeing Jamel Cook get some extended reps. And I think there’s a good group of skill guys in Vavae Malepeai, Cary Angeline and all the receivers, I think all of them have shown something this fall.

Garry, do you think this is feasible or fantasy? What if Helton PROMISES Adoree no fewer than 10 touches per game on offense? Do think there’s any possibility that could tip the scales in favor of him staying? With Jack, Langley, Lockett and Harris all returning, maybe he won’t be needed quite as much on defense. And with some regular time dedicated to offense, he could show off his explosiveness even more. . .

Helton addressed this during a recent media call and, as expected, said that’s definitely something that could happen if it helped Adoree’ make a decision to stay. And you never know if that could be part of Adoree’s reasoning if he does make that choice. His primary reason for staying would be to compete for a national title but the Heisman is also a major goal of his, and he is well aware of what the added component of being an offensive weapon would mean to his candidacy.

Now that Scott Thompson left for the TE coaching job at Fresno State, who would be your ideal candidate to fill the vacated coaching spot, and what position group would you like to see the new assistant working with?

Thompson was an offensive administrative assistant, not a full-time coach, so there is no vacant spot as far as a position coach.

In the PC years, we consistently dominated Big-10 teams in the Rose Bowl. Our speed and athleticism were a winning formula over the slower, more brute-force programs like we’d see out of the Midwest. How would you assess our style of play today compared to 10 years ago, and also this PSU team compared to our Rose Bowl opponents from that period? Is it again speed and athleticism vs. power? Will the strategy for winning be similar?

Yes, the speed and athleticism of the Trojans was a key but the thing that always surprised the Big 10 teams was how physical the Trojans were. Former strength & conditioning coach Chris Carlisle would often note the media storylines about how the big strong Midwest teams were coming out to play the sushi eaters from LA, yet they always found out the reality. I think we’re seeing something similar this year because while Adoree’ Jackson and Sam Darnold have received so much attention the Trojans have quietly been plaving very well in the trenches.

PSU is a true run first offense. Is PSU’s RB Barkley the best RB USC will face this season? What are the keys to stopping him?

I’m still going to say Christian McCaffrey is the best running back the Trojans will have faced this season although Barkley is certainly a good one. Kevin Bruce commented this week that the Nittany Lions are more of a spread offense than a pure power team, and Clancy Pendergast and the defense have shown the ability to stop a lot of good running backs in similar systems this year.

To what do you attribute Stevie T’s unexpected success this year? For example, did he have a history of nagging injuries that he finally overcame, was it Clancy’s scheme, did he benefit simply from a fresh start somewhere new…? It seems hard to believe it was merely depth chart issues at Utah.

I think there were several factors that came together for Stevie and the Trojans. One is that it was simply a good fit, there was a huge opportunity for a starting role and he had the skills and the maturity to take advantage. I don’t know how well it might have worked if he was a younger player but the fact that he was older and more of a veteran is something Helton mentioned a lot as being something Stevie really brought to the table. I also think Stevie benefited from working with Clancy and BKU, I’m not saying he didn’t get good coaching in Utah because they obviously know what they are doing on the d-line but I know it worked well here.

Is CCH giving the players 2 weeks off and then starting practices? Or how are the practices going to work?

There were some light workouts this week as the players continue with finals. Full practices will get started on campus next week and will mirror an in-season game week practice schedule. The final week before the bowl game is shifted a little bit to accommodate bowl week activities such as press conferences and Lawry’s visit.

Who will have time to get well with this layoff? For one JuJu sure could use some healing time.

JuJu and Justin Davis would be the top two guys I’m looking at to get well, but there are certainly others like Taylor McNamara, Aca’Cedric Ware, Porter Gustin and Josh Fatu who will benefit from the time off.

Recently read Sonny Dykes’ philosophy on recruiting (may have been from a source on this site). He said everybody knows the group of top HS players that are highly likely to be successful in college (roughly around the top 100). After that, there’s a lot of uncertainty among the next 300 HS players. It’s a crap shoot, but those that do the best job of evaluation and development succeed. Do you agree with that? Seems to suggest that all these rating services that have recruits so precisely ranked are a waste of time…

I don’t think the ratings are a waste of time but I think you take them for what they are worth. I can see the point about the top 100 guys being easily identifiable, and the guys in that next group you can kind of throw a dart at a board to see how they are ranked against each other.

Hi Garry, who will be coached up to be QB #2 for the Rose Bowl? (Of course, I hope we don’t see him on the field until the final seconds of our blowout win.)

Helton said that Jalen Greene would be available, and we’ll see him take reps in practice next week. This offense fits Jalen well.

Coaching stability was never the watchword in the Pete Carroll era, and it definately is not how the staff would be described following Pete, with two mid-seasons fires and three interim coaches. Any ideas on potential staff changes, losses?

This is very much a priority for the university. Since there has been so much instability they have made it a priority to do everything they can to promote stability moving forward. So far we haven’t heard of any major rumors of pending moves, ironically one name that has popped up is Helton’s brother Tyson, who was mentioned as a candidate for the head job at Western Kentucky.

Looks like we’re in Darnay Holmes top three. Gut feeling- where to do you think he ends up?

I think there’s a very good chance he ends up a Trojan. The Adoree’ factor is big, and he knows the type of talent that would be surrounding him at USC.