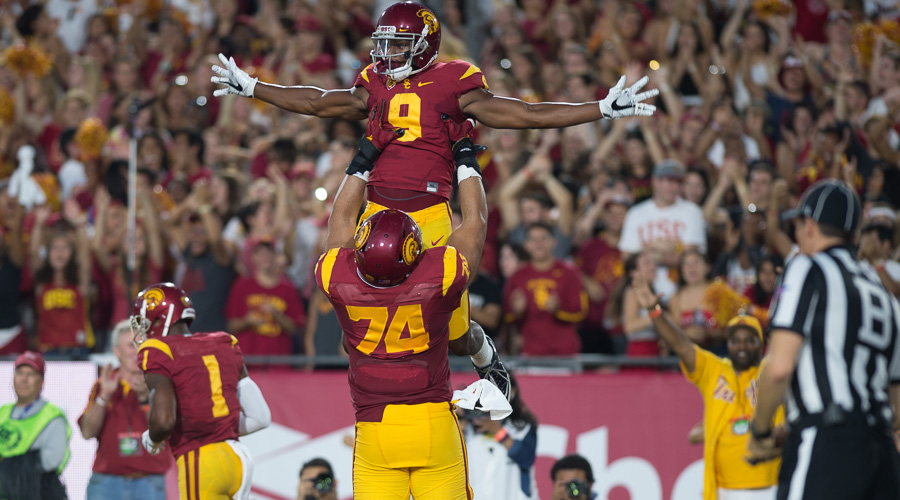 In this edition of the mailbag we talk about the health of the Trojans, the pending decisions from Adoree’ Jackson and JuJu Smith-Schuster, as well as the possibility of a position switch for JuJu if he decides to stay:

Just for fun … Do y’alll want to take a guess at what Adoree and JuJu will do? Or, at least talk about the factors involved in their decision, and when do you guess they’ll announce?

I don’t think it will take long after the Rose Bowl for both players to make their announcements. They have been saying all the right things about not thinking about it until after the bowl game, but the reality is that plenty of thought has already gone into the process. My read of the situation is that Adoree’ is the more likely to stay, and there are plenty of people within the McKay Center who think it could happen. The opportunity could be there to compete for a national championship and a Heisman Trophy, and perhaps even play a bigger role on offense. With JuJu, I just get the sense that he is going to leave. And I would understand the move, his career body of work as a receiver has shown enough, even if he was banged up a little at the end of this year. I am intrigued by his talk earlier this week about the thought of coming back and playing safety (see below)

Any injuries to report from the practices this week that might affect any of the Trojan’s impact players? Any key players missing reps or sitting out for any reasons?

None that we’re aware of. Adoree’ had a slip and some soreness with his ankle last week but it isn’t expected to be anything major. This is a pretty healthy football team right now getting ready for Rose Bowl.

In a recent interview at a Rose Bowl event, JuJu spoke about he thought of returning in 2017 to play Safety. If he were to do that, how do you think that would affect his draft status?

It’s a very interesting thought. Count me as one of those who watched him in high school and thought he should have been on defense. Don’t get me wrong, I think he’s a terrific offensive player but he had a physical presence on defense that you simply don’t find in too many safeties, and we’ve certainly seen over the years how valuable a player like that can be. So the question then becomes, how serious is he about a possible move? If it’s just something to dabble in for the team while wanting to still pursue being a receiver full-time I don’t see it as something that would impact his draft status all that much. But if there is something in his head that is seriously thinking about moving to defense I think that would definitely be a situation to watch.

Garry…….Are we going to win?

Hello GP, can you please confirm who the current names that are scheduled to OV on the 1/13 & 1/20 weekends. I understand it can all change but as of now. Thank you.

Is Aca Cedric Ware ok for the Rose Bowl?

He’s fine. Not sure how many carries he will get with both Ronald Jones and Justin Davis available but he was running well in the bowl practices.

Garry; comparing the attrition in practice and these off weeks leading up to the RB, it looks like we are in significantly better shape and have an advantage there as well as the stats mentioned by ESPN [efficiency on O & D and game control].

Trojans are very healthy right now, and the biggest beneficiaries of the extended break were Justin Davis and JuJu Smith-Schuster. Both guys were battling lingering injury issues more than they wanted to at the end of the year and a little time off gave them extra time to rest. We also saw both teams lose a couple players this week, USC had reserve linebacker and special teams player Olajuwon Tucker and reserve DT Kevin Scott ruled ineligible for the game while the Nittany Lions lost a member of the receiver rotation and a starting linebacker to suspensions.