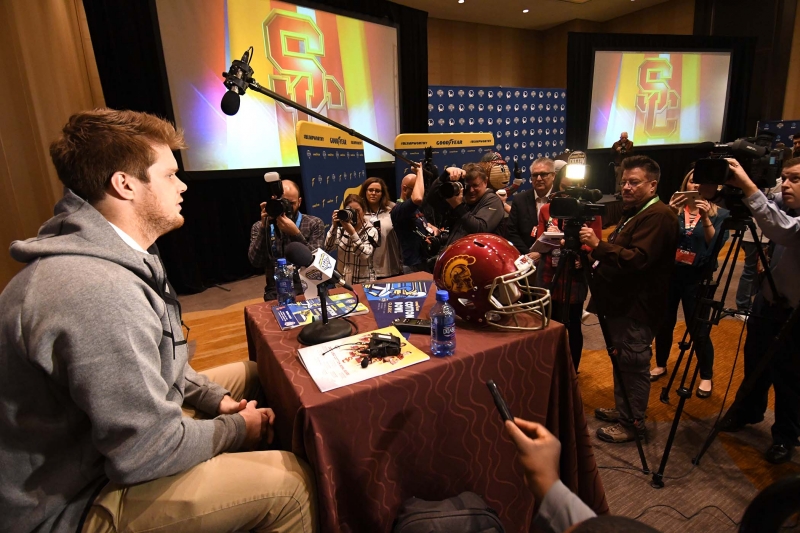 Connor Murphy would be the back-up for Iosefa.

I don’t know if he’s 100% but I’m guessing he’s as healthy as he’s been all year. The Trojans have played one game in 5 weeks and that’s some good rest for Imatorbhebhe’s mysterious injury, hopefully that allows for him to surprise as a major weapon patrolling the middle of the field on Friday.

usc88
How many players can USC sign this year? I know this changes from day to day but perhaps a best guess for now.

I’m still going to project 18 but, as you say, the biggest variables to that number still haven’t been decided yet in terms of early NFL draft departures, transfers, etc. There were 9 signees last week, 1 additional commit for a Feb signing (JT Daniels) and three committed players who didn’t sign. If all of those remain in play that could mean only 5 spots available on the Feb signing day.

motovich
Do most college coaches value the character of the players it recruits? Obviously they don’t want to recruit a bunch of thugs or criminals, but does it really matter? And does the Helton regime place a higher premium on the character of its recruits than past SC coaches?

Some coaches value it more than others. Every coach will talk about valuing character but the truth comes with actions. We had a situation at USC this year with a quarterback recruit and I appreciated the patient way that Clay Helton looked into it, and then eventually decided to move on. He didn’t have a knee-jerk reaction when he heard the news but he also didn’t let it slide. There is a flip side though when coaches get to know the players and their nature is to help the young men, I remember Lane Kiffin continuing to recruit Markeith Ambles even with a troubled past and Kiffin said “I know what he has to go home to if this doesn’t work out”.

Trojan Trev
Hi Garry- Out of the 9 signees, that the Trojans landed last week, who do you see as the one that will have an immediate impact? I think that Palaie Gaoteote will be that guy and a dominate Rey Maualuga type of player. Also, what are you hearing on Isaac Taylor-Stuart signing with USC in February? I like his length and the athleticism that he could bring to our secondary.

Yes, I would also put Palaie as the most likely to have an early impact. At the very least I see him as an active special teams guy next fall and then I wonder where he will line up on defense. He’s listed as an inside linebacker now but he can play outside too. As for Isaac, he sure seems to be casting a lot of looks toward the SEC with a trip to Georgia coming up next month but he will also have a visit to USC, and that can be a big reminder of why he has been interested in the Trojans in the first place. I would still project him to sign with SC but I wouldn’t call him a done deal by any means.

cheparro
Garry: Now that Daniels is reclassified to a 2018 entry, will he get a chance to play in any of the high school all star games? Army? UA? If he goes to the Army game, Mater Dei will have 4 players, Daniels, Amon Ra St. Brown, Murray (why isn’t USC recruiting him as an OL), and Tuliaupupu….that would have to be some sort of a record for players from one high school.

There has been a lot of unofficial talk that JT will be added to the Army game roster next week but we haven’t seen anything official.

Stevie Blue
What are we going to do with all of our linebackers?

We needed them. There are 4 linebacker spots in the Pendergast defense so I’ve got no problem loading up when the talent is there, and that includes a fifth backer if Solomon Tuliaupupu wants to come.

SC93er
Do you think of this game against OSU as a kind of measuring stick both for Helton and for USC, to see how far they’ve come after the blowout loss to Alabama and Saban last year and face another top-drawer coach and program on the national stage?

Yes, I do think that’s part of this game. Cameron Smith talked about it this week in the media session by dismissing thoughts of comparing this to the last time USC was here, he talked about how it’s a different program, a different culture. OK, there’s one way to prove that, win the game. The reason the USC program has so much tradition is by winning a lot of these big games, that’s part of how you measure where you are against the other big boys. And that goes for Helton too in his coaching match-up with Meyer.

Rodgarnay51
Garry, now that the Trojans have fortified the lines and really stocked up at LB, they’re in good shape with (IMO) one glaring exception – CB. Jones, Marshall, Harris and Langley will all be upperclassmen, and the two CBs brought in last season are both coming off injuries. I think this could be a real problem unless the Trojans address it strongly and quickly. Do you agree, and what do you think SC will do to shore up the position?

I can make a real case for bringing in 3 corners in this class, I’m not sure if the numbers will allow it but it makes sense. I really like the pick-up of Chase Williams, you can’t have too many athletic guys with size at corner. But that also goes directly to the question of Marcus Johnson, a dynamic athlete but at 5-8 is he a guy who sticks with the class? He’s been a commit for over a year but he’s also been pretty silent on interviews so we don’t really know where we stand right now, and there are some good corners still on the market with guys like Isaac Taylor-Stuart, Oliajah Griffin and Julius Irvin (corner/safety). One guy I wonder about for next year is Jonathan Lockett, he was playing some good football last year before getting hurt and his veteran presence could wind up being a real boost if he can get back for the fall.

VancouverTrojan
I realize that we have 1 big game remaining in the 2o17 Calendar year, however I want to throw this question out there. Give me 1 word to describe 2017 Trojan Football.

SC200SC
Garry,
One of the Board posters recently suggested that those interested should view Mater Dei highlights to see just how good J T Daniels is, and so I did. Beyond Daniels, Junior Horace “Bru” McCoy kept jumping out at me as really. really good and a USC mold WR. Yet, people say he is only Mater Dei’s third best receiver. Are the Trojans showing interest in McCoy?
Thanks

Trojans have been showing a lot of interest and offered a while ago as McCoy is expected to be one of the top recruits in the nation for the class of 2019. I do think he ends up a receiver but I also think he’s got enough talent on defense that he could play there too.

longshot10
Can we assume that Porter is out for the game?

Yes. Helton said during the Thursday media session that Porter will not play, and he also said Jackie Jones is a game-time decision with an ankle.