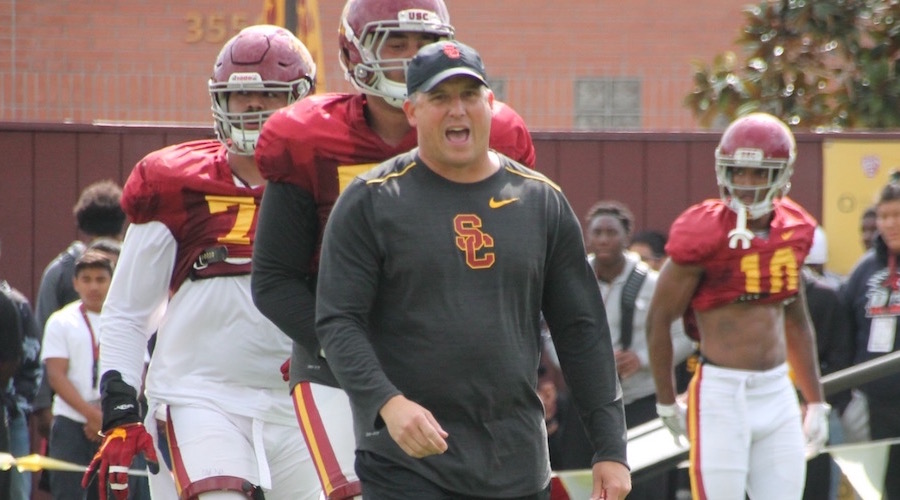 Garry, do you believe SC will cough up the cash necessary to compete with other teams to hire top flight assistants? If the cash is offered, will Helton actually be able to attract top assistants, or is the situation too toxic?

Those are definitely the key questions we’re facing right now. You have to figure if this is the plan Swann was going to put in motion that he would have to be prepared to provide the money to attract some top assistants, especially if he is saving the money of not having to pay the Helton buyout. But it’s one thing to identify those coaches and have the money but you still have to bring them in, and it remains to be seen if Helton can do that.

Any reaction to all the craziness from recruits that you’ve heard so far? In your opinion, will these developments be a net positive or negative on recruiting?

We haven’t seen a negative reaction so far, that’s for sure. I think most recruits have a generally positive relationship with Helton and their comments have been in support of the decision. I think there are some recruits who are waiting to see who is hired at their position and that’s fair enough.

With Helton being kept in place (for obvious reasons, Mr. $wann), how do you see Clay overcoming two of the most glaring of obstacles: 1 – The lack of discipline on the field?
2 – Clay’s inability to have his finger on the pulse of the game (i.e. punting @ TX with 8:30 left @ TX 44 down by 3 scores)?

I don’t see Helton magically changing in those areas so it would need to come from his assistants. He clearly needs to add a disciplinary-type coach in the Ed Orgeron mold, and he needs to let that coach do the job. One of the criticisms of Helton is that he is too nice and that doesn’t always work in the football world. you need that voice who will hold the players accountable when it comes to discipline. As for the finger on the pulse moments, that is where the offensive coordinator will ideally need to come in. Would Clay allow for a strong enough voice to have input or control of those decisions? We’ll find out.

Garry- I was furious when I saw that Helton was being retained. I believe that he is hopelessly in way over his head, and has no business running our program. I also fell this must be painfully obviuos to Swann. That being said, what scenario do you feel is most likely in forming our AD’s decision:
1) He makes #3 million a year to raise money, and won’t jeoapardize his situation
2) Because he played a role in Helton’s extension, he doesn’t want to look like he is eating crow by letting Clay go
3) He is concerned that with the school not having a permanent President and with all of the lawsuit noise,and feels like a coaching search now would create a much smaller pool of potential qualified candidates.Therefore his plan will be to let go of Helton at the end of next year, barring a miracle.
Thanks for any insight you can lend.

I have heard from many people that the financial situation definitely played a role, the fact of the buyout, so it would be #2 but more for the financial aspect than how it would reflect on Lynn. But there are so many questions about the path he chose that I think it goes beyond just that reason, I would recommend reading this article from Kevin Bruce which does a great job breaking down the statement Lynn made in support of Clay, the reasons for that support and their plan moving forward.

Garry.. can you state which assistant coaches from 2018 have been let go or left and which ones have been retained . After reading all the threads thus Tuesday evening I am confused

It seems like the assistant coaches that were not retained were on the lower end of the payscale, except for maybe Tee. Could that have been a mutual parting considering his role was going to regress much like the offense did. The coaches retained is that financially based or was there real thought about what is best for football success. If so, can you explain it to me….. Contrary to what many posters opine, coaching at USC is still a great gig. If you’re a good coach, you will work with good talent and it will get noticed. Look at McCullough, one year here then the NFL. I’m sure that Swann is seeing plenty of interest in the vacancies. Do you have faith he can make the best choices. Was he already making a short list for the vacancies or is he starting from scratch? Do you know how he is evaluating the prospects, the returning coaches, an evaluation team, or just his gut?

I think they were released for football reasons, and Tee had just received an extension last year so that was an extra financial hit. As far as having faith in the Swann/Helton combination to bring in quality replacements, that remains to be seen and it is a big key to this whole plan. It’s one thing to target a Kliff Kingsbury, it’s another thing to sign him, and that isn’t done yet.

Kingsbury is a name strongly being tossed around for OC. Big name, talented dude… but in your opinion would he be the right guy? His air raid mentality, combined with Clays love for passing, really doesn’t get us back to the ‘tough, physical, run first’ style we all have been asking for. Also, how would Drevno play into this mix? How much input do you think (the former Michigan OC but ultimately just) the Oline coach would have? Lastly, do we have a fullback on the field week 1 next season. Many thanks as always—

It certainly wouldn’t get us back to the physical run-first style that has served USC football so well through the years, and which Clay Helton promised when he first got the job. That style is still the preferred offense for many fans (myself included) but we’ve seen the USC offense slowly go away from that basically since the Kiffin era and this would be another step in that direction. If that kind of change is going to happen, at least let it be with someone like Kingsbury who has shown a lot of success with it. And if he comes I imagine it would be with a lot of control over scheme in terms of how the o-line operates, and I would not anticipate a fullback on the field.

Garry, have you heard anything about a 200 million dollar payout by USC from some lawsuit? And who might that person be?

Yes, as I understand it the settlement was part of the gynecologist class action suits, but I don’t think it was the only suit being brought against the university in that case.

Little off the coaching topic, how bad is Vavae’s injury? MCL surgery this late in the year may mean he’ll miss 2019…

I haven’t heard any kind of official update so I wouldn’t want to speculate on a recovery time. I certainly haven’t heard anything so far that would indicate he could miss the entire season.

Assuming Kliff Kingsbury is named OC, do you believe he will be able to pick his starting QB?

I’m sure that would be part of the negotiations between him and Helton. I can see Kingsbury wanting control of issues such as personnel and scheme, and I can see Helton being reluctant to give that up.

Garry, I was hoping you could clear up a question I had about which LB positions the 2018 recruits are playing.

My understanding is that IE and Scott are at ILB, Mauga is playing Iosefa’s OLB position (I forget what exactly this is called in our defense) and McClain is playing the predator spot (Gustin’s position). Is Solomon T expected to play ILB or Iosefa’s position? Does Levi Jones leaving the program along with Cam Smith graduating affect that at all? And is Winston at the predator spot like McClain or Iosefa’s spot like Mauga?

Palaie has been at the Mike linebacker spot that Cameron Smith played. Raymond Scott has been behind John Houston at Will linebacker, and that is where Solomon Tuliaupupu has also been projected to play. Mauga is behind Iosefa at the OLB spot, while both McClain and Winston have been playing at predator.

Garry, I hope you don’t mind a twofer. I’ll settle for either one.

1) What is the status of Stephen Carr? He looked nothing like he did in his freshman season and didn’t play all that much. Do you think he will be a full-go next season and regain his form?

2) Everything has been so haphazard, do you think Swann had a game plan with several contingencies re: Helton and the staff, or is he flying by the seat of his pants?

Thanks and Fight On!

Good question on Carr but we usually don’t hear too many injury updates in the off-season. I remain hopeful for a complete return to form but when the injuries hit like this you always have concern. It’s a shame because he is such a talent, hopefully we see him healthy next year.

Hard to say on Swann but I’m leaning toward flying by the seat of his pants. He’s asking us to put faith in him, an athletic director who has never done this before, and the coach who put us in this situation in the first place, while offering no specifics on how things are going to get fixed.

Looking back over the last few years, and in light of the assistant coach firings, what is your thought on Clancy being retained? Frankly, I don’t think he has lived up to the promised when he was hired (and I thought that was a good hire). But USC defense hasn’t lived up to expectations, regardless of the athletes on the field. At USC, and particularly with this HC, defensive coordinator is an extremely important job role.

I think Clancy is solid and there are times he can put together some really good game plans but I wouldn’t have minded if we went in another direction. With the athletes we can get on defense I think there are things we could do different to see some different results.

Texas Tech has a bigger O-line than USC but did not run the ball well. If Kingsbury gets the OC spot will USC abandon the run first, physical football commitment and go all Air Raid or will they emphasize balance. Is balance dead?

Based on what we’ve seen in the past from him there would definitely be the Air Raid component that focuses more on the passing game but he hasn’t been hired yet so we don’t know if he would tweak that system or adjust it in some way. There are some teams out there who incorporate a pretty decent run element to their version of the spread. As far as pure balance, I wouldn’t expect that if he’s hired.