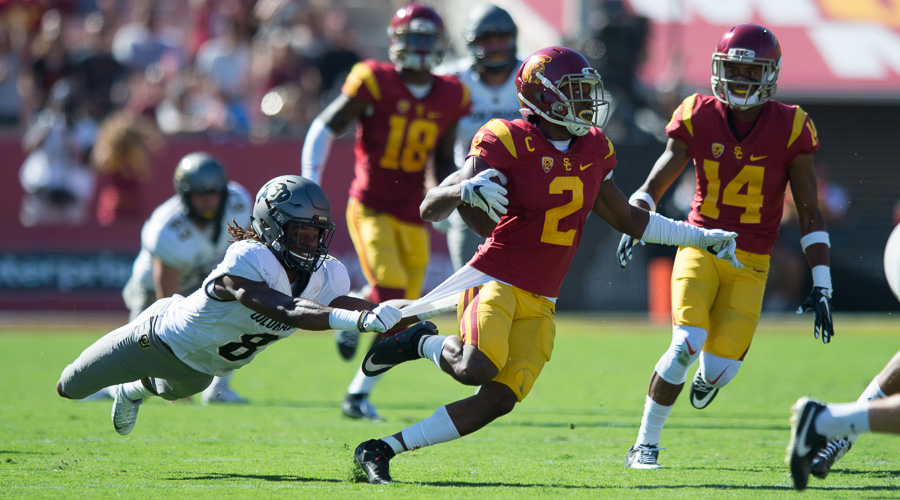 In this edition of the mailbag we discuss the growth of Clay Helton and staff, Kenechi Udeze, Kenny Bigelow and potential early entries to the NFL draft:

What is your favorite thanksgiving week game memory?

It’s not so much that the game was unique but I’ll always remember 1984 Notre Dame because that was my thanksgiving week game as a freshman. It’s rained a lot that day, Rex Moore threw mud in Allen Pinkett’s eye and the Trojans lost 19-7.

My belief at this time would be that Head Coach Helton has pretty much proved to most USC fans that he is a keeper (although a loss to Notre Dame might tarnish that image somewhat if it were to occur). Given the fact that the Trojan coaching staff will be heavily involved in recruiting for 2017 and 2018 very soon (as early as Sunday if Utah doesn’t help us out), what is your outlook for USC being able to retain most or all the members of this coaching staff for the next few years to come now that they seem to be doing very well in player development and game-time coaching? Can Clay keep this posse together for awhile to provide some athletic and cultural stability to a program that has had so many different coaches, schemes and cultures over the past 8 years since the departure of Pete to the NFL?

One of the major priorities of the athletic department administration is to have as much stability with the staff as possible (after so much instability in recent years) and one of the advantages to keeping this staff together is that Clay Helton brought in assistant coaches that he had previously relationships with. There is a really good chemistry with this group. Of course, any time you have success there are going to be opportunities for bigger jobs and I think the first guy who would come to mind is Tee Martin. Clancy Pendergast and John Baxter could potentially get looks but they are also both “good soldiers” as coordinators.

Will Jake Olsen get into the game v. ND?

I don’t know that he will get into the Notre Dame game but Helton was asked recently about Jake potentially getting into a game and he responded that his wife has been questioning him on that too. So Jake has Angela Helton on his side in a push for playing time, that has to be a good thing.

With Kiffin and Sarkesian, the offense focused on a single receiver. We are now seeing the slot at times as the primary target, as well as the TE. If forced to guess, I would say this is the effect of Ty Helton…or did all three want the offense to finally utilize everyone?

I would put it more on Sam Darnold but the coaches are certainly part of it. The one area that Clay Helton has talked often about with his brother is the integration of the tight end that he’s done in the past, and we’ve certainly seen that this year. But I think Darnold is the one who makes it work at the end of the day with his ability to be “number-blind” and throw to the open receiver rather than a specific player.

The fact that two players were dropped from the program, how does that affect the total scholarships allowed for 2017?

The Trojans will get back the scholarships for Osa Masina and Don Hill, along with EJ Price, and that will definitely help the total scholarships available because the Trojans don’t lose a ton of seniors. We will do a full scholarship breakdown on Monday to show how many slots could be available and how they might be filled.

The defense has been excellent during this streak. One weakness, however, has been the lack of a dominant pass rusher. What do you think about moving Gustin inside and bringing in Wole on obvious passing downs?

I think that’s something that could get a longer look next year but it would surprise me to see it right now. I can see Wole and Connor Murphy as two pass-rushing guys that will really impact how the line looks next year because they are going to be ready for playing time, and the coaches will have a full off-season to move the pieces around as they see fit.

I’m very curious as to why Helton left the starters in so long after the game was completely decided against UCLA. I’ve always been of the opinion that it’s good to get the reserves some playing time, and it would be a shame for a key player to get injured in garbage time. What’s your take on that Garry?

I understand what you’re saying and I think everyone has that clock in their head in terms of how they would balance taking starters out with a big lead. Helton said he addressed it with JuJu during the game last week, about not risking further injury with the game in hand. And I always like the opportunity to see the reserves get some snaps.

Garry, What is your early guess at what bowl game the Trojans will be playing in?

Garry- I think we all know this is Adoree’s and Juju’s last game at the Coliseum. Any other Juniors seriously considering leaving early for the NFL?

I haven’t heard talk on any others who would considering leaving. I think Viane and Damien are the two that you hear mentioned as other possibilities but there hasn’t been anything legit on either guy. There does continue to be a train of thought within the program that Adoree’ isn’t automatically gone. I would certainly bet that way right now but Adoree’ also operates in his own way and there are some lofty goals that could entice him to stay (Heisman, Thorpe, national championship pursuit, etc).

Garry could you give an update on how Bigelow’s rehab is going?

All indications are that things are progressing well. Kenny is out there every day at practice to help oversee things, he’s even gotten in some light running from time to time and you don’t notice any kind of limp or issue when he walks or runs. We’re also seeing a real maturity in Kenny right now, and he should serve as the elder statesman of the line next season when Stevie T is gone. The time spent working with Kenechi Udeze has really been a benefit for Kenny in that regard.

BKU v CEO? Who should the Trojans have coaching the D-line in 2017?

It will be Udeze and he’s got a bright, bright future as a coach. I say that with full respect of what Ed Orgeron did at USC, but I think what coach KU did with the defensive line this year is pretty impressive for any coach, much less a first year coach. He took a unit that was considered the biggest concern on the team and coached up the guys he had available to him to the point where they have been a dominating force in recent weeks.

I was one of the real doubters early in the season, but now Coach Helton deserves a lot of credit for the team’s turnaround. How much do you attribute this success to him, to his assistant coaches, and how much to the players themselves?

I certainly give credit to both groups, players and coaches. You hear so much talk about how players can grow but I think this turnaround for the Trojans showed a real example of how coaches can grow too because I think this staff made some genuine adjustments as the season went along that helped the team. Of course, the biggest change was the move by Helton to switch quarterbacks and the resulting impact of Sam Darnold. You just can’t overstate how much that changed things and brought a different energy to everything the Trojans have done since that point.