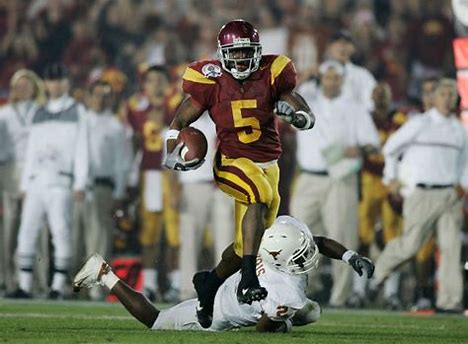 The backfield of the official WeAreSC All-Time USC Trojan team is set, as quarterback Matt Leinart is officially joined by Reggie Bush and Marcus Allen.

Allen is USC’s No. 2 all-time rusher, with 4,810 total yards, including a single-season total of 2,427 yards in 1981, which is a record unlikely to be broken. He became the first player to rush for more than 2,000 yards in a season that year, and did so on his way to winning the Heisman Trophy. Allen’s 274 yards against Indiana that year rank third on USC’s single game record list, and his 45 total rushing touchdowns rank third all-time at USC.

Bush is likely a controversial addition to this team, just as he is a controversial figure within the USC community. He finished his three-year career at USC as the school’s eighth-leading rusher, with 3,169 yards, and added 1,301 receiving yards and scored 38 touchdowns from scrimmage. He averaged 7.3 yards per carry, including an incredible 8.7-yards per carry mark in his Heisman Trophy winning 2005 season.

But Bush was also embroiled in scandal that dated back to his time as a Trojan, and the NCAA ultimately punished USC with significant scholarship losses, a bowl ban, forfeiture of wins, and forced USC to permanently disassociate from Bush. Bush also forfeited his 2005 Heisman Trophy.

Regardless, Bush was a joy to watch during his time at USC, and here he forms a potent 1-2 punch with Allen in the All-Time Trojan backfield.

The WeAreSC All-Time Team moves onto the selection of wide receivers now, and there is certainly something of a recency bias to this position, as the past decade plus has seen some of the greatest receivers come through USC.

Make sure you check the WeAreSC Poll this week to make your selection of the two receivers who you feel belong on the WeAreSC All-Time USC Team.