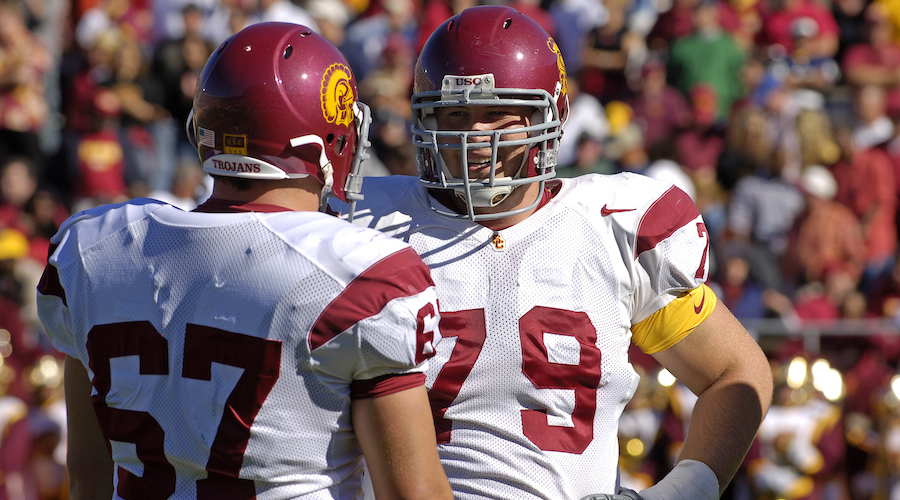 At tackle, voters selected Anthony Muñoz and Tony Boselli. While Muñoz missed a number of games during his USC career due to injury, he is regarded as the greatest offensive tackle in NFL history, something that certainly swayed voters in naming him to this team. He is an 11-time Pro Bowler, a 9-time First-team All-Pro, was named to the NFL 1980s All-Decade Team and to the NFL 75th Anniversary All-Time Team.

Boselli is in the College Football Hall of Fame, having earned the Morris Trophy in 1994 after being named a first-team All-American in 1992, 1993, and 1994. The No. 2 overall selection and first-ever pick of the Jacksonville Jaguars franchise, Boselli was a three-time All-Pro selection and was selected to five Pro Bowls.

Coming in third in the voting, and deserving of mention here, is Ron Yary, one of the greatest college football offensive linemen of all time. Yary was a two-year starter along the offensive line for the Trojans, earning All-America honors as a junior and senior. He is USC’s only Outland Trophy Award winner and was voted into both the College Football and NFL halls of fame. If I’m coaching this team, we are running plenty of sets with six offensive linemen so I can get Yary on the field as often as possible.

One of the loaded positions when it comes to voting for an all-time USC team is offensive guard, though the two winners ran away with the vote, in Brad Budde and Bruce Matthews.

Budde is a member of the College Football Hall of Fame and in 1976. He is the only USC player to win the Lombardi Award and was a unanimous first-team All-American in 1979. Budde started for three Rose Bowl-winning USC teams during his career, and was the No. 11 overall selection of the 1980 NFL Draft.

Matthews is arguably the most durable and versatile offensive linemen in NFL history, as he played all five positions along the offensive line and started 229 consecutive games, on his way to 14 Pro Bowls. Before that, Matthews was a two-time All-Pac-12 first teamer and an All-American while winning the Pac-10’s Morris Trophy as a senior.

Rounding out the starting five is center Ryan Kalil (photo above). A three-year starter for the Trojans, Kalil was in the middle of some of the greatest offenses in USC history. He won the Morris Trophy and was a first-time All-American following his senior season in 2006. Kalil carried that success into the pros, where he was a five-time Pro Bowler and two-time first-team All-Pro during a 12-year career with the Carolina Panthers.