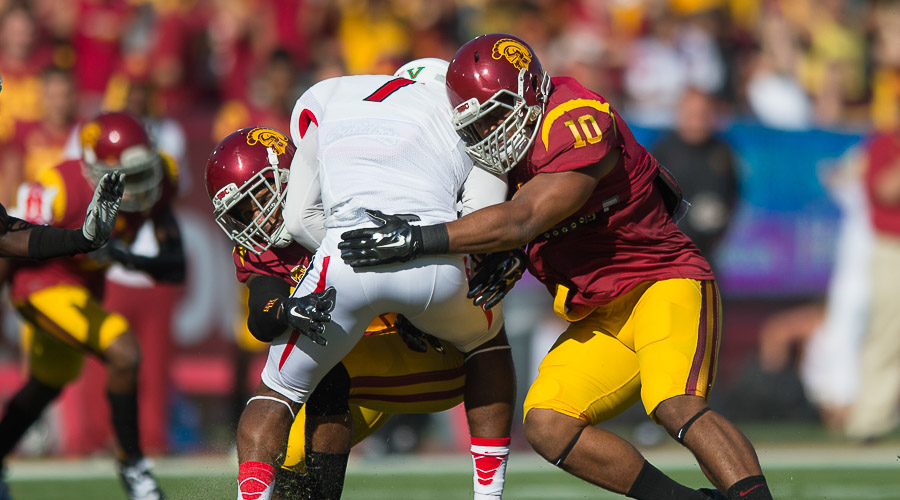 Linebackers were always going to be one of the strengths of the WeAreSC All-Time USC team, and it’s tough to argue with the voters here, as the three selected are also the three USC linebackers that were named to the Pac-12 All-Century Team.

The leading vote getter in the poll was Junior Seau, who helped popularize the coveted No. 55 jersey at USC. Seau was at USC for just two seasons, but played in two Rose Bowls and on two top-ten Trojan teams. His 1989 season was truly special, as he was named an All-American and the Pac-10 Defensive Player of the Year, as he racked up 27 tackles for loss for a defense that allowed just 66.3 yards per game on the ground—the second-best mark by a USC team since at least 1952. Seau was the No. 5 overall selection of the 1990 NFL Draft and was inducted into the Pro Football Hall of Fame after a terrific career largely spent with the San Diego Chargers.

As good as Seau was for those two years, there are few players in USC history that trump the accolades of Richard Wood. Nicknamed “Batman,” Wood was USC’s first three-year first-team All-American, and was a consensus All-American in both 1973 and 1974. He was a part of two national championship teams and played in three Rose Bowls, and was elected into the College Football Hall of Fame in 2007.

Rounding out the linebacker unit on this team is USC’s only Butkus Award winner, Chris Claiborne. Another famed No. 55 at USC, Claiborne was a unanimous All-American in 1998, as well as the Pac-10 Defensive Player of the Year, USC’s team MVP, and led the Trojans in tackles, pass deflections, and interceptions that season. He finished his USC as a three-year starter with 312 tackles, including 27 for loss. He was the ninth overall selection of the 1999 NFL Draft.