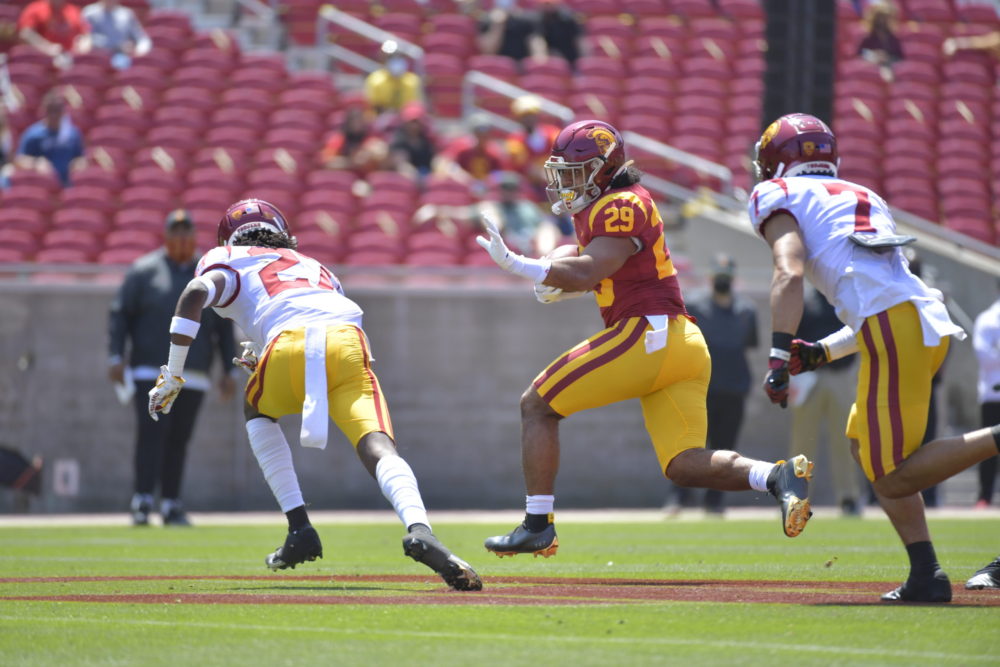 Wednesday’s USC practice featured one of the best runs of the spring for the Trojan offense. With the offensive line getting shuffled more than it had been at any point this spring, all eyes were on the performance of that unit.

The line responded with arguably its best showing of the spring and helped set the stage for one of the offense’s best plays of the first 10 spring ball practices.

With an offensive line that featured Courtland Ford, Andrew Vorhees, Brett Neilon, Liam Jimmons and Jonah Monheim from left to right, running back Vavae Malepeai took a handoff to the right side, cut upfield and was off to the races.

The key block came from Jimmons, who got into the second level to create the space for Malepeai to pick up a nice gain. Nielon also got his hands on a linebacker and Drake London threw a block downfield to help Malepeai take it the distance. Monheim and tight end Erik Krommenhoek were key at the line of scrimmage as well.

Questions about the offensive line and running game will likely linger into the season, but this play was a solid showing from all involved. Newcomer running back Keaontay Ingram has made a quick impression, but Malepeai and Stephen Carr continue to remind everyone that they’re still on the roster. Monheim might be someone to watch the rest of the spring along the offensive line if he is going to continue to get extended run with some of the projected first-team linemen.