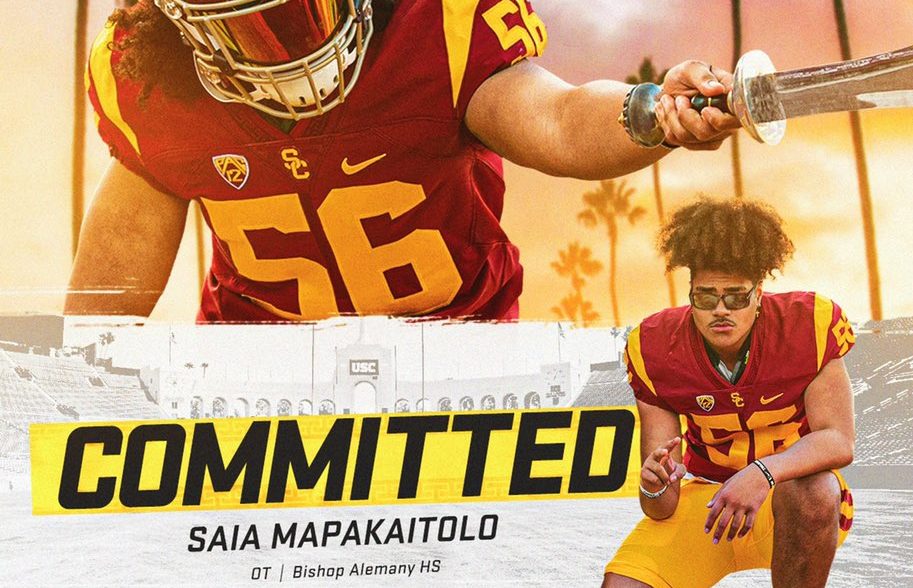 The USC Trojans continued their hot recruiting run on Friday, grabbing a commitment from three-star offensive tackle Saia Mapakaitolo. And as has become a custom following verbal commitments, USC coaches and staffers took to twitter for a social celebration.

Mapakaitolo is a 6-foot-6, 280-pound offensive tackle, and the three-star prospect is commitment No. 13 for USC in the 2021 recruiting class.

While Mapakaitolo doesn’t check in as a four or five-star prospect, there is plenty of athleticism to work with and a frame that should be able to develop well at the next level.

Drevno is going to have plenty of raw material to work with in the coming years, as USC signed six three-star offensive linemen in the 2020 class and now have three more scheduled to be added to the mix.

On Friday, Drevno celebrated as he has with every offensive lineman commitment in this class.

“Here come them Trojans” is a phrase that offensive coordinator Graham Harrell started using when he got to USC, and he delivered it again on Friday.

The commitment also might have served as a bit of a birthday present to Harrell, who turned 35 on Friday.

And as always, USC Director of Scouting Trey Johnson delivered with a celebration gif.

A few coaches and staffers went with the #TakeBackTheWest hashtag, as the Trojans landed their sixth commitment from a Southern California prospect since mid-March. USC coaches have spoken at length about solidifying their presence with local prospects and the momentum this staff has in the area is noticeable.

Mapakaitolo is another Polynesian prospect headed to USC, joining a few others in this class and countless more who have made big impressions during their time as Trojans. Wide receivers coach Keary Colbert celebrated with a gif of the Tongan rugby team, and the phrase Mate Ma’a Trojans (a play on the phrase Mate Ma’a Tonga, a saying associated with the team, which means “Die for Tonga”).

And there are fewer prospects more excited to see USC adding talent to the offensive line than future Trojan running back Brandon Campbell (Katy, Texas/Katy), a four-star commitment in the 2021 class.