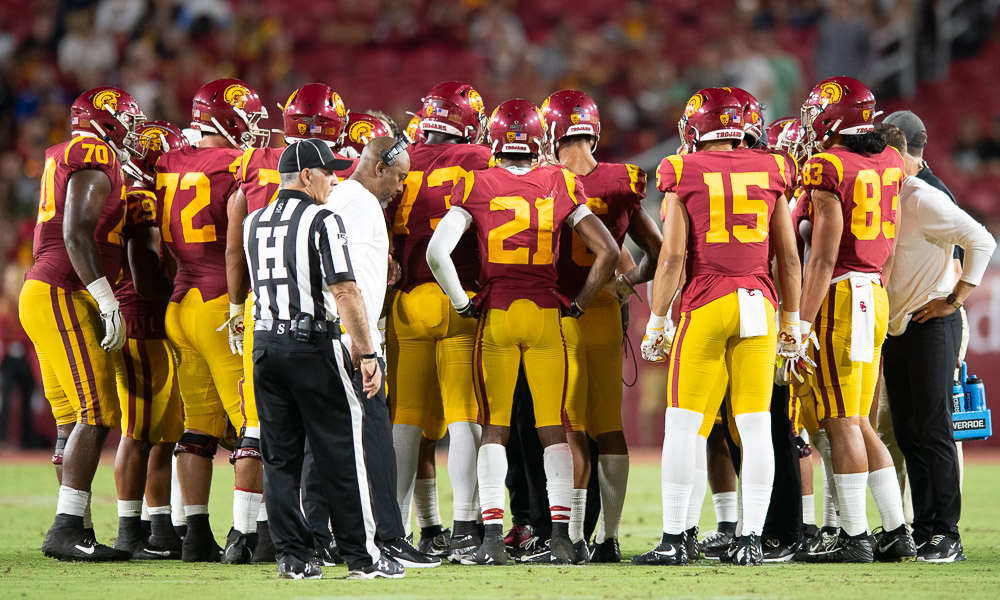 USC head coach Clay Helton wouldn’t get into specifics in regard to the players who will miss the Colorado game, citing HIPAA laws in withholding names and competitive advantage in withholding which position groups were affected, but he did say that there are “starters” involved.

USC had its first positive Covid-19 test of a player earlier this week, and subsequently needed to isolate one other player due to a positive test and quarantine five others due to contact tracing. As a result, the Trojans will be without those seven players against Colorado.

“We will have the opportunity, just like any injury, the next man will be up,” Helton said. “That’s an old saying, but it gives opportunities to other guys.”

Helton said it will be the first opportunity to see playing time this season for some of the replacements and he believes that the plan they’ve put in during the past two training camps of really pushing and testing the backups just as much as the starters will lead to solid performances.

“I’m probably more excited for them because they’re guys that are looking for their first opportunity to really make a major contribution and they’ll be at different positions,” Helton said of the replacements. “I’m more excited than fearful for them, because I know they’ve trained for this. It’s just going to be neat to see how they step in the the job that they do.”

Helton also said he knows the team will need to rely even more on those impact players who are still available.

“Anytime that you have injuries or go through this is our first time, it’s really about your elite and the guys who have been major contributors lifting and putting the team on their back and being truly special,” Helton said. “I think I went around to all those guys and said it can’t be good this week. You have to be great. You gotta bring the cape with you, be Superman this week.”

USC is already down numbers at linebacker, as starter Palaie Gaoteote remains in concussion protocol following a hit against Arizona. He missed the Utah game. Linebacker Ralen Goforth was injured in that Utah game and is still questionable for the game on Saturday.

Goforth did not practice on Wednesday, though he was on the field, and Helton said they would see where he is on Thursday as they determine his availability for Saturday. If those two are not available, Kana’i Mauga and Raymond Scott would start at inside linebacker, and Tuasivi Nomura is the only backup at either position that Helton or defensive coordinator Todd Orlando has mentioned as a possibility.

Some good news exists on the injury front, as running backs Markese Stepp and Stephen Carr are on track to play. Both practiced on Monday and Wednesday after Stepp missed the Utah game and Carr was slowed coming into the game and injured during it. Helton said Stepp “looked really good” during the team’s first physical practice of the week on Wednesday, and that there was no setback by either playing following that session.

USC could also have defensive end Caleb Tremblay available. He sat out the Arizona and Utah games after suffering stingers, but he also practiced yesterday and Helton said he felt more confident in playing. Helton said he anticipates Tremblay being back against Colorado.

Pac-12 programs are required to have 53 scholarship players, including seven offensive linemen, four defensive linemen and one quarterback, in order to play a game this season. Though, teams can also choose not to play if they feel their numbers in other areas create too much of a disadvantage.

“I looked down and said, with this group of men we have right here, do we feel confident in the job that we can do?,” Helton said of addressing the team. “And every man was like, yeah coach, we got this.”

Helton said the players have dealt with adversity within games extremely well.

“I don’t anticipate them not going out and producing on Saturday,” he said. “I think that investment that we made in training camp is really going to pay off for us. We’ve already seen it some this year, but now in this situation, we’re going to truly put that to the test to see where we’re at.”