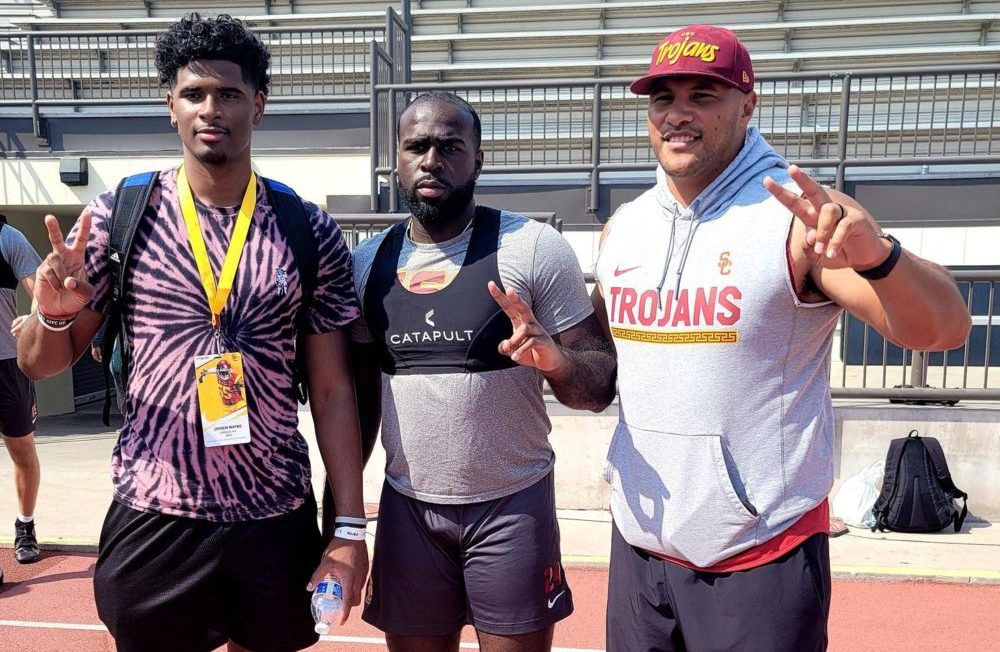 Five-star 2023 standout Jayden Wayne (Tacoma, Wash./Lincoln) isn’t getting cheated when it comes to recruiting visits this month. Like many other top prospects across the country, Wayne was ready to hit the road to check out as many schools as possible and really start digging into the recruiting process once the calendar turned to June, signaling the end of the recruiting dead period.

So far, he’s taken unofficial visits to Washington, Alabama, Auburn, Georgia, Clemson, Texas, Texas A&M, TCU and USC. He’s now on a weekend trip to Notre Dame and Michigan, and will see Florida, Miami and Oregon before the month is over.

The five-star athlete is one of the nation’s most coveted prospects in the 2023 class, checking in as the No. 13 overall prospect and No. 4 defensive lineman and the No. 2 recruit in the West region.

His father, Donald Wayne, has been with him on all the visits and both father and son have been busy during every stop. The elder Wayne said the two have been constantly taking notes during each stop and will write down a pros and cons list at the end of each visit in order to keep all their thoughts straight and make sure they have answers to all of their questions, which range from student-athlete healthcare, to tutor availability and anything else that will affect the life of a student-athlete at that particular school.

“We’ve taken a lot of notes, shook a lot of hands and heard a lot of things,” Donald Wayne said of the visits he’s taken with his son. “And you try to weed through what’s a normal conversation and what’s recruiting tools as you go through it.”

The two have met with an impressive array of head coaches on these stops, but Wayne said one of the things that stands out the most is when his son can meet with the position coaches and really get a sense of their coaching styles and abilities. That was something the younger Wayne was able to take advantage of during the stop at USC, when he was able to sit down with defensive line coach Vic So’oto.

“Vic was amazing,” Donald Wayne said. “He’s full of energy…He gave some tools to take away that [Jayden] can apply in high school.”

Wayne said they could feel the family atmosphere at USC in the way coaches and staffers interacted with each other and the players. It was a big week for defensive line recruiting as well. USC hosted five-star 2021 defensive lineman and fellow Washington prospect J.T. Tuimoloau (Sammamish, Wash./Eastside Catholic) early in the week and grabbed a commitment from five-star 2022 defensive end Mykel Williams (Columbus, Ga./Hardaway) a few days before Wayne arrived on campus for his visit. Defensive end Korey Foreman, the No. 1 prospect in the 2021 class, is also someone who resonates with a lot of the 2022 and 2023 prospects.

“We kind of felt that energy spill over onto us,” Wayne said of the defensive line recruiting momentum. “We heard some of those names, Korey Foreman, Mykel Williams, and how they could all fit together…The energy was great. I can see why they committed.”

He’s contributed on both sides of the ball for Lincoln High School the past two seasons. As a true freshman, he recorded 27 tackles and two sacks and caught a pass on offense. In a shortened sophomore season, he had three catches for 91 yards, as well as 35 tackles, two sacks and two forced fumbles in just six games.

That high school connection could be a big piece of the puzzle when it comes to USC’s recruitment of Wayne. His former high school teammate is USC 2021 linebacker signee Julien Simon, who Wayne said put his son in a playful headlock and gave him a quick and lighthearted recruiting pitch when they ran into each other on the visit.

“That’s a big one for us,” Wayne said of Simon being at USC. “Julien is a good kid and a good role model for Jayden. If Julien chose it, it’s a good decision. He has the same kind of values that Jaylen has…That plays a huge role.”

As with all the visits so far, getting on campus at USC was a big deal for the Waynes, as they continue to piece together as much information as possible before making a decision on a school.

“Before we went there, we knew USC was a top school,” Wayne said. “After attending, I think we walked away with a bigger picture and understanding of how prestigious USC is as a private school in LA. The culture is family and they preach it and they preach hard work. We’ve been to all of these schools and we can compare facilities, but a weight room is a weight room…The relationships will be important.”

Wayne plans to enroll early at his school of choice and likely won’t wait all the way until signing day to make his decision.

They actually didn’t know how much USC was going to push for the five-star prospect before the visit began. Donald Wayne said they hadn’t heard from the Trojans much since picking up the offer all the way back in May of 2020. But it’s clear that he’ll be a priority target for USC moving forward.

“We got there and talked and build that back up,” he said. “They are super interested.”