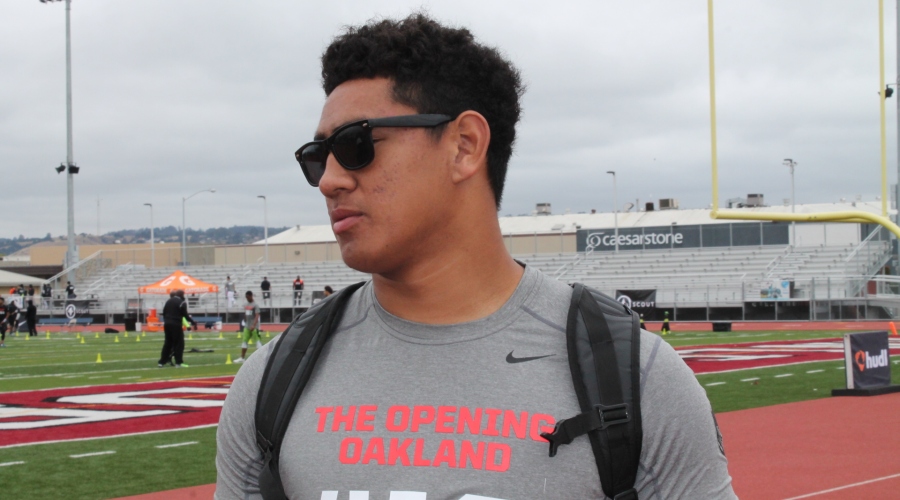 It was quite the showing at the Northern California edition of The Opening camp with 12 players earning invites to the event finals in July. Here’s a look at how the Trojan prospects performed:

QB: There weren’t any USC targets today, as the Trojans already have a commit for 2016 and two offers out for 2017, and none of them were at the camp.

RB: The guy who jumped out to everyone was Najee Harris, which is no surprise considering how Najee has performed all spring on the 7-on-7 circuit. He earned a rare underclass invite to The Opening and what continues to impress me about him is simply how athletic, and big, he is for a sophomore with the ability to just overpower opponents at times. I also liked Vavae Malepeai, a solid all-around type back from Hawaii with good hands and routes.

WR: A very good group, led primarily by players from out of the area. I really liked Kalakaua Timoteo from Hawaii, a lanky receiver who got off the line well and showed some good hands, including on several downfield balls. Timoteo was one of two receivers to earn Opening invites along with Oregon commit Theo Howard, who clocked a 4.38 earlier in the day. The Trojan coaches paid a visit this spring to Mililani HS, where Timoteo and Malepeai are teammates. Javon McKinley made the trip up north after not being able to take part in the LA regional, he didn’t earn an invite to the Opening today which kind of surprised me because I thought Javon did what he needed to do. One underclassman that I liked was Terrell Bynum from Servite, his frame reminds me of Devon Flournoy with smooth routes and a lot of polish to his game. Another underclass name to remember is Josh Falo, a tall WR/TE type.

TE: The headliner at this position was Devin Asiasi (photo above) and he gave a noteworthy performance. Devin checked in at 270, he said his playing weight is closer to 255 and he will be there by the start of the season. He moves so well for a guy his size and I thought he showed very good hands. There were a few drops but he also took a ton of reps so there are bound to be some drops with that much work. Devin will take an unofficial visit to USC in June and he has a strong relationship with position coach Marques Tuiasosopo.

OL: USC verbal Frank Martin made the trip after also taking part in the LA event because he was in search of an invite to the event finals, which he earned today. Martin played at both tackle and center, and showed his physicality, which I think is the strength of his game. A couple other names that stood out were Francisco Perez and Henry Hattis.

DL: Oluwole Betiku is another player, like McKinley, who missed the LA regional due to injury so he made the trip north to earn an invite to the finals, which he did. Everyone reading this has heard the stories about how Betiku is a physical specimen, and it’s true, but he showed today that he is also an edge rusher with a very quick burst off the line. It’s amazing to think of how raw he is because he’s so new to the game.

LB: Caleb Kelly was as good as advertised, I would put him with Mique Juarez as the two best athletes I’ve seen so far this spring at the position. I was also pretty impressed with the overall play of Camilo Eifler, good in pass coverage and pretty physical. Both earned invites to The Opening.

DB: This very well may have been the best position group of the day, which was unexpected. I thought the top two corners were Jordan Parker and Byron Murphy, both were aggressive at the line of scrimmage and in coverage. Parker is a little bigger of the two. It was also a good showing from David Long, a guy with a solid all-around game who can play either receiver or defensive back. All three got invites to the Opening, as did Jordan Fuller who made the trip from New Jersey. I was a bit surprised that Lamar Jackson didn’t get an invite, I thought he played well. Elijah Molden from Oregon was a solid underclassman at corner.