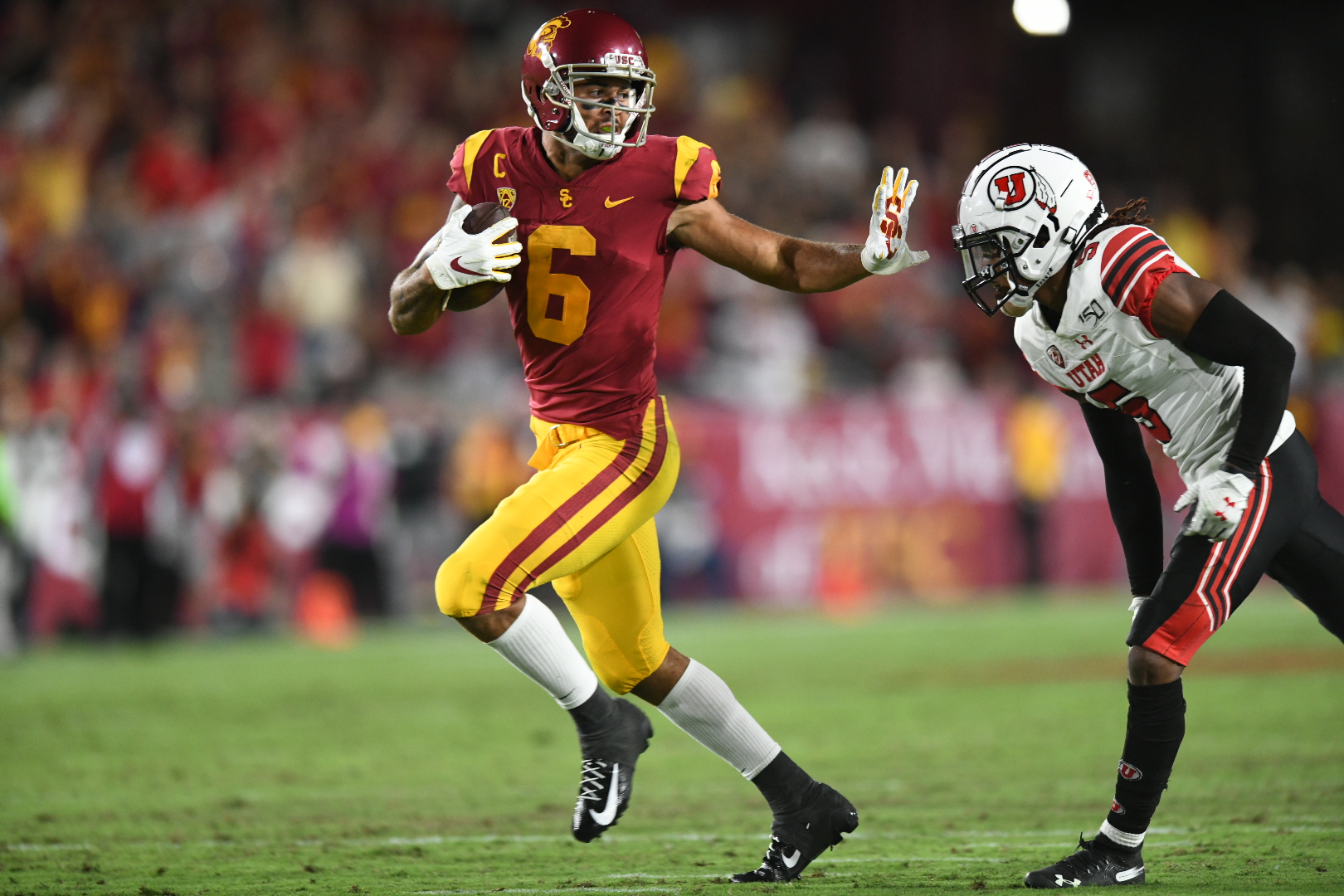 USC was supposed to be tested by the best Utah team of Kyle Whittingham’s tenure on Friday night. Instead, it was the Trojans who brought their best, knocking off No. 10 Utah 30-23.

With Reggie Bush, Matt Leinart, and Urban Meyer on hand as part of Fox Sports’ coverage, the Trojans rose up for head coach Clay Helton, delivering another signature win against a ranked Utah team.

The game turned upside-down early, when USC starting quarterback Kedon Slovis was injured on the second play of the game, and Matt Fink was inserted. The redshirt junior, who started the season as USC’s No. 3 quarterback, responded immediately, going 6-for-7 for 81 yards and a 29-yard touchdown to Tyler Vaughns on his first drive.

“I can’t tell you how proud I am of this guy,” Helton said of Fink. “He’s one of the most special people I’ve been around and when his number was called, he made the most of it tonight.”

Fink nearly missed this opportunity, as he entered his name in the transfer portal back in the spring, and looked headed for Illinois. But he said the lure of playing with these players at USC was enough to keep him here.

“This team is stacked,” Fink said. “You have the best players in the nation here. I’m saying that SC is on the rise. We have guys that are going to push us to the top here.”

Despite the injury to USC’s starting quarterback and Utah’s star running back, fans were treated to an offensive explosion at the game’s outset. USC and Utah scored touchdowns on the first three drives of the game, as the Trojans took a 14-7 lead. But USC did not score again in the first half as the teams settled into a defensive battle, and the Trojans took a 14-10 lead into halftime.

Utah’s defensive line clearly wanted to set the tone from the start, and defensive tackle Leki Fotu both knocked Slovis out of the game and forced a fumble. But for the first time in a while against a really physical opponent, USC found a way to consistently hit back.

“I think this is a mentally tough bunch,” Helton said. “Stuff is bad sometimes. And what are you going to do? Are you going to make an excuse, or get the job done?”

The final scoring surge was ignited by Michael Pittman, who finished the game with 10 receptions for 232 yards, including a 77-yard touchdown catch on a third-and-nine play when USC needed it most. After a Fink interception and Utah’s subsequent seven-yard touchdown drive seemed to tilt the field squarely toward the Utes, the Trojans were able to rally one final time. A punt by USC’s Ben Griffiths rolled out of bounds at the six-yard line. Three snaps later, true freshman Drake Jackson broke into the backfield and forced an intentional grounding call against Huntley. On the ensuing drive, Fink found Pittman for a 42-yard gain on third-and-eight, and a short Markese Stepp touchdown run suddenly had USC on top 30-20.

Fink was very good against a very good Utah defense, completing 21-of-30 passes for 351 yards and three touchdowns, and the USC defense did just enough to record the win, allowing Utah to pile up yards between the 20s, but coming up with enough stops when it mattered most.

Utah totaled 457 total yards, but had to settle for several field goals, had one blocked, and fumbled a ball at the goal line at the end of the first half, as USC’s defense was gashed by outside runs, but did a much better job as the game wore on in containing Utah quarterback Tyler Huntley.

Huntley finished the game 22-for-30 for 210 yards and a touchdown, but rushed for just 60 yards on 18 carries, and was sacked twice.

“I really got to credit our defense,” Helton said. “They were put in situations where they had to play great red zone defense…I’m glad Huntley is an old person. I don’t want to see him again.”

Utah played much of the game without standout running back Zack Moss, who suffered a shoulder injury after rushing for just 20 yards on six carries. It was the first game Moss hadn’t rushed for a touchdown since last year’s USC game. USC also did well to shut down dynamic slot receiver Britain Covey, who finished with just three receptions for seven yards, to go with two rushes for 13 yards.

While the Trojans struggled to run the entire game — finishing with 13 yards on 22 carries — it was there when they needed it most, as Vavae Malepeai and Markese Stepp picked up first downs on the final drive of the game to allow USC to kneel on the ball and run out the clock. USC did not have a drive last more than 2:32 until the end of the game, where they took the final 4:01 off the clock, holding a seven point lead with five runs. Malepeai picked up a first down with a 10-yard run on second-and-nine, while Stepp iced the game with a three-yard carry on third-and-one.

Markese Stepp’s touchdown was the first of his career.

Utah rushed for 247 yards and five yards per carry.