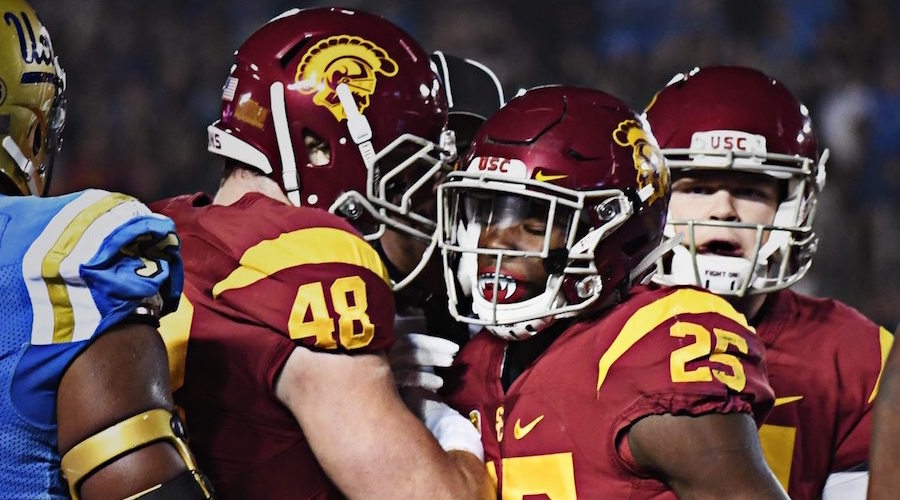 It wasn’t USC’s cleanest performance, but Clay Helton’s squad overcame some early mistakes to cruise to a 36-14 victory over UCLA on Saturday night, extending the Trojans’ winning streak to seven games, while also keeping the team’s hopes of a potential berth in the Pac-12 Championship Game alive.

But with UCLA (4-7 overall, 2-6 Pac-12) playing some inspired football to open the contest, it was the Bruins that held a 14-7 lead over USC (8-3, 7-2) early in the second quarter – thanks to two touchdown passes from Mike Fafaul to Jordan Lasley.

It was then that the Trojans rounded back into form, however, with Clancy Pendergast’s defensive unit shutting down the Bruins offense for the remainder of the game

Offensively, the Trojans ground attack got rolling as well, with Ronald Jones II breaking off a thrilling 60-yard touchdown run to tie the game at 14-14. Jones finished the game with a game-high 121 rushing yards and two touchdowns on 18 carries.

On USC’s next offensive series, quarterback Sam Darnold came up with a 31-yard touchdown pass to De’Quan Hampton, who made a beautiful leaping grab on the play. Placekicker Matt Boermeester missed the PAT attempt, but USC still had a 20-14 lead, and it was apparent that the Trojans had seized control of the game.

Boermeester would make up for his earlier mistake, hitting a 30-yard field goal attempt to give the Trojans a 23-14 lead at halftime. The redshirt-junior would also connect on attempts from 32 and 25 yards out later in the contest.

Darnold, meanwhile, hooked up with Hampton again in the third quarter, this time for a six-yard score.

While he did throw two first-half interceptions, Darnold was extremely impressive for the most part, once again, completing 25 of 36 passes for 267 yards and two touchdowns, while also rushing for 49 yards.

Wide receiver JuJu Smith-Schuster, who suffered a hip pointer during the game, led the Trojans with eight receptions for 76 yards. Hampton, who had a total of just four receptions to his credit heading into the game, finished with three grabs for 51 yards and two touchdowns.

USC racked up a staggering 527 total yards of total offense in the game, compared to 266 for the Bruins. The Trojans also ran 95 offensive plays to UCLA’s 51, while holding the ball for a total of 43:47.

Fafaul completed 15 of 31 passes for 181 yards and two touchdowns for the Bruins.

The USC defense limited UCLA to a total of just 55 yards on the ground, with defensive back Ajene Harris leading the team with five tackles.

USC returns to the Coliseum next Saturday, where they’re set to play host to another rival, Notre Dame, at 12:30 p.m. PST.