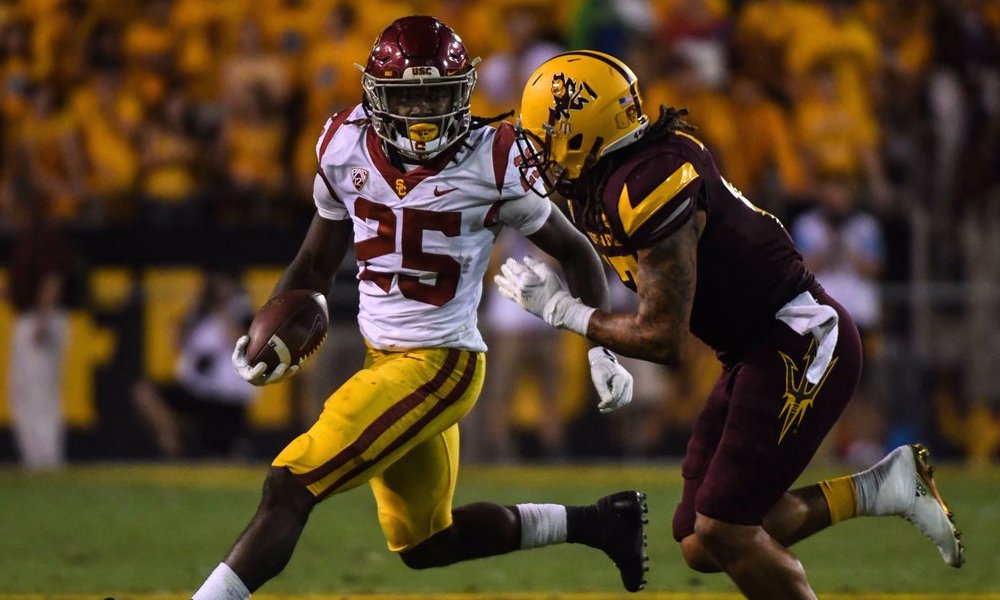 The Trojans showed improvement in just about every facet of the game, particularly on the offensive side of the ball where USC racked up a total of 607 yards thanks to standout performances by Sam Darnold, Ronald Jones II and Tyler Vaughns.

341 of those yards came on the ground, 216 of which were accounted by Jones, who averaged 12 yards per carry.

The Trojans started off red-hot from the get-go, with Darnold engineering a nine-play, 75-yard drive that he capped off with a 32-yard touchdown pass to Deontay Burnett to give USC a quick 7-0 lead.

The Sun Devils responded with a field goal, but Darnold and the USC offense got right back to work with the redshirt-sophomore passer hitting Vaughns along the sideline before he broke free and ultimately dove for the end zone to complete the 42-yard scoring play to give the Trojans a 14-3 lead.

Jones got rolling in the second quarter, breaking loose for a thrilling 67-yard touchdown. A little later Darnold went back to Vaughns, this time finding the redshirt-freshman receiver in the back of the end zone for a 19-yard touchdown. Vaughns managed to hold onto the ball despite a crushing hit by Dasmond Tautalatasi, who was subsequently ejected from the game for targeting on the play.

On USC’s next offensive series placekicker Chase McGrath got in the act, nailing a career-high 51-yard field goal to give the Trojans a commanding 31-3 lead.

But not everything went the Trojans way in the game. In fact, they even managed to briefly seize momentum when ASU quarterback Manny Wilkins heaved up a Hail Mary pass at the end of the first half, with the ball bouncing off of USC cornerback Jack Jones before Kyle Williams hauled it in for a Sun Devils touchdown.

The play was a definite point of controversy, as Williams was originally ruled down on the USC one-yard-line, with both the Trojans and Sun Devils exiting for the locker room. After an officials video review, however, the play was ruled an Arizona State touchdown, and after the teams returned for the Sun Devils PAT, the Trojans’ halftime lead was cut to 31-10.

Following a Wilkins TD plunge to open the half for ASU, USC took hold of the game, once again, when Jones came up with his second long touchdown run, a 64-yarder that put the Trojans in front 38-17.

McGrath would add another field goal in the fourth quarter, before Trojans defensive back Ykili Ross picked off a Blake Barnett pass and returned it 37 yards for a touchdown.

Sam Darnold finished 19-of-35 passing for 266 yards and three touchdowns. His favorite target, Vaughns, paced the Trojans with six catches for 126 yards and two touchdowns.

USC will be back in the Coliseum next Saturday, where they will face the Arizona Wildcats.