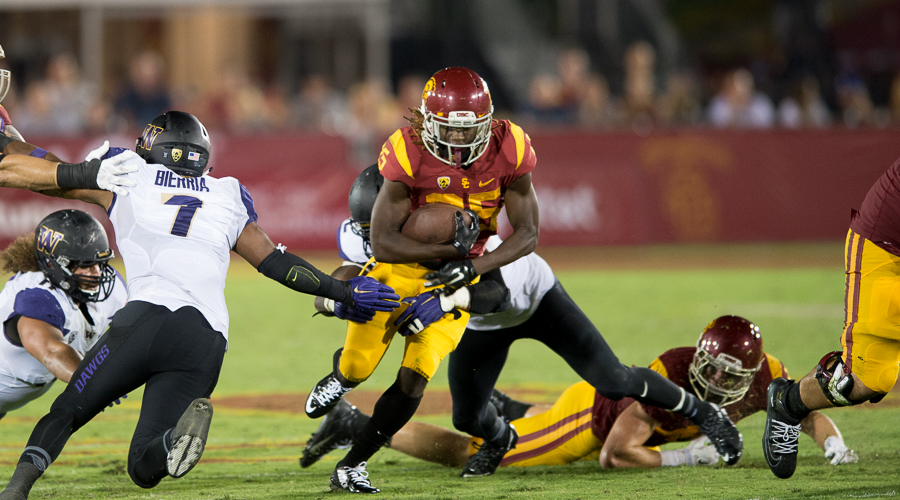 In a sloppy game that saw the USC passing attack struggle right from the get-go, the Trojans fell to Washington at home on Thursday night, 17-12.

The Trojans offensive line, which lost starting center Max Tuerk early, struggled to protect quarterback Cody Kessler throughout much of the contest, giving up five sacks, with the senior passer throwing two uncharacteristic first-quarter interceptions, and finishing the night just 16 of 29 for 156 yards.

Still, the Trojans led 6-3 at halftime, thanks in large part to a solid showing by the USC defense, as well as tailback Tre Madden (17 Rush, 120 yards) and placekicker Alex Wood.

But the Washington offense, led by freshman Jake Browning (16-32, 137 Yds, 1 INT), seized momentum in the third quarter when, one play after JuJu Smith-Schuster (6 Rec, 82 Yds) turned the ball over on a fumble, wide receiver Marvin Hall took a backwards pass and then promptly hit a wide-open Joshua Perkins for a 27-yard touchdown to put the Huskies up 10-6.

Washington added another touchdown in the fourth quarter when Myles Gaskin, who rushed for 134 yards on 22 carries, scored on a one-yard TD plunge to give the Huskies a 17-6 lead.

The Trojans still had their chances late, with Ronald Jones II (8 Rush, 65 Yds) rushing for a one-yard score to make it a 17-12 game with over 12 minutes left. But in the end, despite out-gaining the Huskies 346-299 in terms of total yardage, the Trojans just were never able to put an efficient drive together down the stretch.