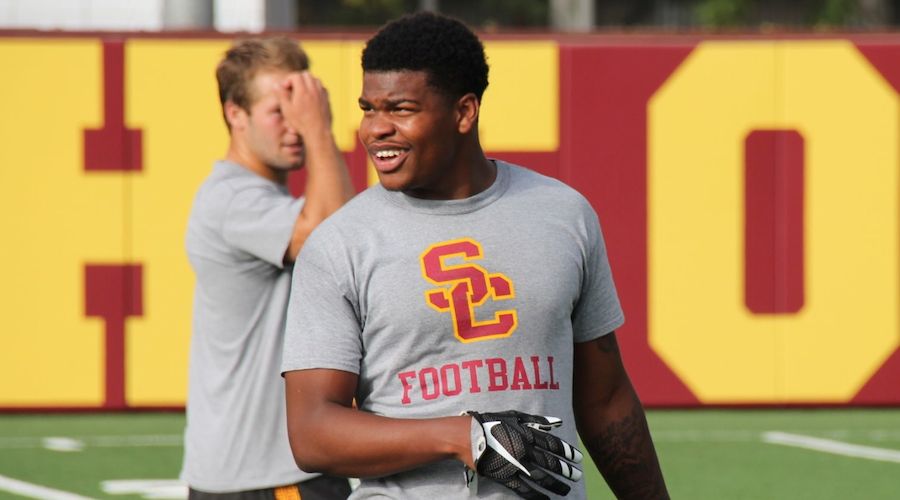 Here’s a few things that jumped out:

* The listing of a fullback. Don’t expect to see a true fullback used a lot, but nice to see it’s still on the depth chart.

* The fact that three tight ends are listed as potential starters. Taylor McNamara has come on lately after transferring from Oklahoma but he hasn’t separated much from Connor Spears and the true freshman Tyler Petite.

* Chad Wheeler and Toa Lobendahn listed as potential starters at LT. This is primarily due to the health status of Wheeler, who was only cleared for full contact last week from his knee injury, and only recently returned from a concussion as well. If Wheeler can go, Lobendahn could end up the starter at RG since he was listed as a potential starter there along with Viane Talamaivao.

* Unchenna Nwosu is out of school last spring but comes back to move ahead of Quinton Powell for #2 SOLB spot.

* Somewhat surprised to see Ruffin ahead of Gustin, or at least to not see an “OR” there. Not because of any lack of Ruffin talent, but he was held out a lot of camp and Gustin was making plays in that time.

* Chris Hawkins (SS) and Leon McQuay (FS) as the starters at the two safety spots. Those two were battling at free safety until an injury in camp to John Plattenburg opened the door for Hawkins (photo above) to slide over, and the line-up will stay that way for now.

* The players listed in italics will enter game week with injury or uncertain status. Lamar Dawson (ribs) is the only player with that designation still listed as a starter.