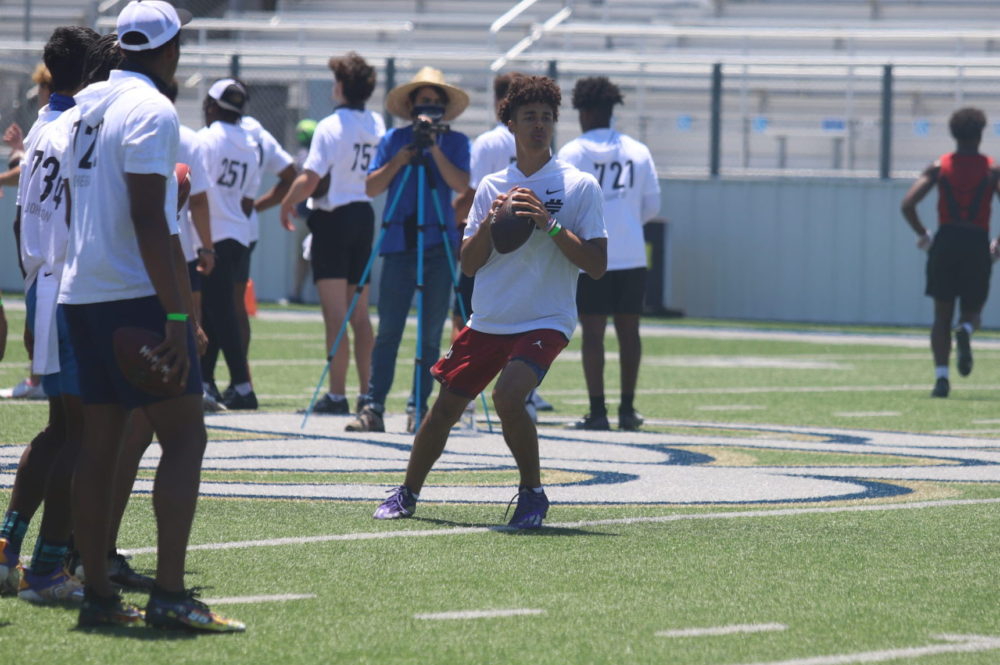 There has been plenty of news on the recruiting trail over the past week, with USC picking up commitments and landing among finalists for top targets.

USC grabbed two commitments last Tuesday, both on the offensive side of the ball but very different in terms of expected immediate contributions.

The first came from transfer wide receiver Jake Smith. The 6-foot, 200-pound Smith is headed to USC from Texas, where he battled injuries but started six times and played in 20 games over two seasons there. Smith was a top target for the Trojans in the 2019 class and his recruitment came down to Texas and USC. A product of Notre Dame Prep in Scottsdale, Arizona, Smith comes to USC expected to contribute right away as part of a growing stable of receivers.

Smith brings great long and short speed to the receiver position and is capable of getting deep as well as turning short passes into long gains. USC needs some answers at wide receiver after losing Amon-Ra St. Brown and Tyler Vaughns to the NFL. Drake London will clearly be a major contributor this season, and big things are expected from Bru McCoy and Gary Bryant Jr. But beyond that, there are question marks, even though Kyle Ford possesses plenty of talent and Michael Jackson III just turned in a phenomenal spring as a true freshman.

Smith is the fourth transfer receiver headed to USC for the 2021 season. K.D. Nixon made the move from Colorado in time for spring ball, though he didn’t appear to lock down a spot as a starter during those 15 practices. USC will also add former Memphis speed receiver Tahj Washington and former Texas hybrid tight end/big receiver Malcolm Epps.

USC then added its first offensive line commitment of the 2022 class, when offensive tackle Keith Olson (Napavine, Wash./Napavine) pledged to the Trojans. The 6-foot-6, 285-pound lineman held offers from Boise State, Oregon State and Utah, among others. He’s a three-star prospect and likely won’t be counted on as an immediate starter, but he’s a good athlete at the position, possesses a solid frame and looks to be a nice prospect to watch develop over the coming years.

USC landed on six top lists this week, for prospects ranging from long shots to must gets.

Toward the top of the 2022 target list sits five-star offensive guard Devon Campbell (Arlington, Tex./Bowie), who included USC along with Alabama, LSU, Oklahoma Texas in his top-five list. Texas is considered the favorite for Campbell, but USC was able to impress him during an official visit in June. Campbell is the nation’s No. 10 overall prospect and No. 1 interior offensive lineman. USC coaches have their sights set on multiple five-star and high-four-star offensive linemen in this class and will chase Campbell all the way until he finalizes a decision.

Also right at the top of the 2022 targets is four-star safety Zion Branch (Las Vegas/Bishop Gorman). On Saturday, the nation’s No. 49 overall prospect and No. 4 safety released a top five list with as much star power as possible. Alabama, Clemson, Ohio State, Oklahoma and USC are the schools still in it for Branch. The 6-foot-3, 190-pound safety has visited USC multiple time and took an official visit there in June. He also took official visits to Ohio State and Oklahoma and that visit to see the Buckeyes had a major impact. Branch won’t commit anytime soon since he plans to take official visits to Alabama and Clemson during the season. How this season plays out could . become a major factor as schools chase Branch.

A couple of defensive line targets have USC still in the picture. The one who will give the first final answer is four-star edge defender Anto Saka (Towson, Md./Loyola Blakefield), who is down to Northwestern, Penn State and USC, and will announce his commitment on Saturday. Northwestern is seen as the program to beat for the 6-foot-2, 230-pound defender.

A defensive line target closer to home is four-star tackle Hero Kanu (Rancho Santa Margarita, Calif./Santa Margarita), who included USC among his top nine schools, along with some power programs in Alabama, Clemson, Georgia, LSU, Ohio State, Oklahoma, Texas and Washington. The Trojans likely need a couple of big bodies at defensive tackle in this class after losing Jay Toia to the transfer portal following spring ball. Kanu is still learning the game after coming over from Germany, but he’s picking it up quickly and his potential is tremendous.

USC is still alive for local four-star receiver C.J. Williams (Santa Ana, Calif./Mater Dei), who announced Alabama, Notre Dame, Stanford, Texas and USC as his final five. He’s marching fairly quickly towards a decision and both Williams and fellow four-star receiver Tetairoa McMillan (Anaheim, Calif./Servite) will likely be committed by the starts of their senior seasons. Notre Dame and Texas have hosted Williams on official visits and his sights have seemed set on leaving the state for college. USC doesn’t often lose out on big-time local receivers though.

Another standout local prospect who could be looking to leave the region is 2023 quarterback Malachi Nelson (Los Alamitos, Calif./Los Alamitos). The 6-foot-3, 180-pound quarterback is a five-star prospect and announced his final seven schools over the weekend. Alabama, Florida State, LSU, Notre Dame, Ohio State, Oklahoma and USC are the schools remaining, but the Sooners have felt like the leaders for a significant amount of time.

USC was in a head-to-head battle with Oregon for four-star wide receiver Isaiah Sategna (Fayetteville, Ark./Fayetteville), who announced for the Ducks on Sunday. The 5-foot-11, 170-pound prospect is the nation’s No. 223 player and a track and field standout as well. Oregon has come out ahead of USC for some top wide receiver targets over the past couple classes, including Troy Franklin and Dont’e Thornton in the 2021 class and now Sategna and four-star Nicholas Anderson (Katy, Tex./Katy) in the 2022 class. USC did grab four-star receiver Kyron Ware-Hudson away from the Ducks in the 2021 class, but the Trojans haven’t been seeing a ton of success with their top receiver targets over the past couple of years after landing top-10 receivers in the 2016-2020 recruiting classes.