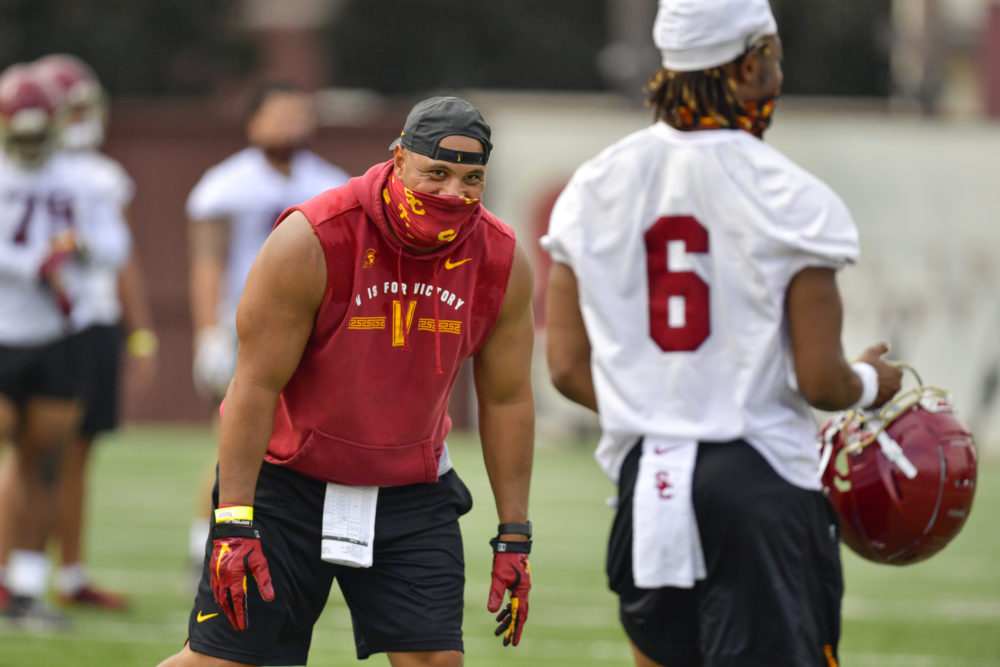 USC opens its season this Saturday against Arizona State, but Trojan coaches might be celebrating earlier than that as a top 2021 target is scheduled to announce his commitment on Tuesday. Elsewhere, USC extended an interesting 2021 offer and landed on the lists of a couple of top 2022 targets.

Four-star defensive end Aaron Armitage (Blairstown, NJ/Blair Academy) will announce his commitment on Instagram on Tuesday at 1 pm PT. Florida, Stanford and USC are the three schools remaining and the Trojans have been considered the favorites for some time.

Armitage had a relationship with defensive line coach Vic So’oto dating back to his time at Virginia and So’oto continued the pursuit when he landed at USC. At 6-foot-4, 242 pounds with the frame to add more weight, Armitage would appear to be a perfect fit for the USC offense with his ability to transition between a 4-3 and 3-4 defensive end. He’s the nation’s No. 198 overall prospect and No. 15 strongside defensive end.

He earned offers from some major programs during his recruiting process — LSU, Michigan, Notre Dame, Ohio State, Oklahoma, Oregon, Texas and others — and was also accepted into Stanford.

USC has a very strong 2021 recruiting class already built, but the front seven is still an area where the Trojans can close strong. A commitment from Armitage would be the first step in doing so, as he would join four-star defensive tackle Jay Toia (Simi Valley, Calif./Grace Brethren) and three-star defensive end Colin Mobley (Hyattsville, Md./DeMatha Catholic).

USC has three wide receivers and two tight ends committed in its 2021 class, but the Trojans might not be done sorting out its pass catchers. USC last week extended an offer to three-star Washington State wide receiver commit Joseph Manjack (Tomball, Tex./Memorial). The 6-foot-3, 200-pound prospect is a terrific athlete and has filled in at quarterback for his high school team this season.

As a receiver, Manjack is impressive in his ability to go get the ball in the air and to create yards after the catch. Like USC wide receiver commit Quay Davis (Dallas/Skyline), Manjack also began his recruiting process by committing to and then decommitting from SMU.

He might not be the only big Texas receiver to keep an eye on, as three-star receiver Hal Presley (Arlington, Tex./Mansfield Summit) recently backed away from his Baylor commitment. The 6-foot-3, 190-pound Presley was a USC target before his commitment, though Auburn has now surged as the predicted landing spot for Presley.

USC landed on top lists for two impressive 2022 recruits over the past week, as five-star running back Emmanuel Henderson (Hartford, Ala./Geneva County) included USC on his top ten list. The Trojans were the only program from outside the Southeast to make the list.

The list was very much what you’d expect from the nation’s No. 18 overall prospect, No. 1 running back and No. 2 player in the state of Alabama. It featured Alabama, Auburn, Clemson, Georgia, Florida, LSU, Mississippi State, South Carolina, Tennessee and USC.

USC clearly has its recruiting pitch locked in when it goes after these tight end/hybrid players, as the Trojans have commitments from Michael Trigg (Tampa, Fla./Carrollwood Day) and Lake McRee (Austin, Tex./Lake Travis) in the 2021 class and have a number of interested tight ends in the 2022 class.

Green included USC among his top six programs, along with Florida, Oklahoma, Ole Miss, Texas and Texas A&M. Green is a big-time prospect, checking in as the nation’s No. 96 overall recruit in his class and the No. 2 tight end.

After signing six offensive linemen in the 2020 class and holding commitments from four more in the 2021 class, USC is going after another group of big men in the 2022 class. With a few local prospects already on the radar, USC went out of state for a couple new offers this past week.

Fitzpatrick has seen his recruitment pick up over the past two months, as Auburn, Michigan, Minnesota, Oklahoma, Texas and now USC have all offered since the beginning of September.

USC’s defensive line recruiting might have gotten a familiar name back on the board, as four-star defensive tackle Marcus Bradley (Gaithersburg, Md./Quince Orchard) announced his decommitment from Maryland on Monday.

USC pursued the 6-foot-3, 270-pound lineman (along with several Quincy Orchard teammates) before Bradley committed to the hometown Terps. It would not be surprising at all to see USC — led by So’oto — push themselves back into the picture for Bradley, the nation’s No. 175 overall prospect and No. 12 defensive tackle.