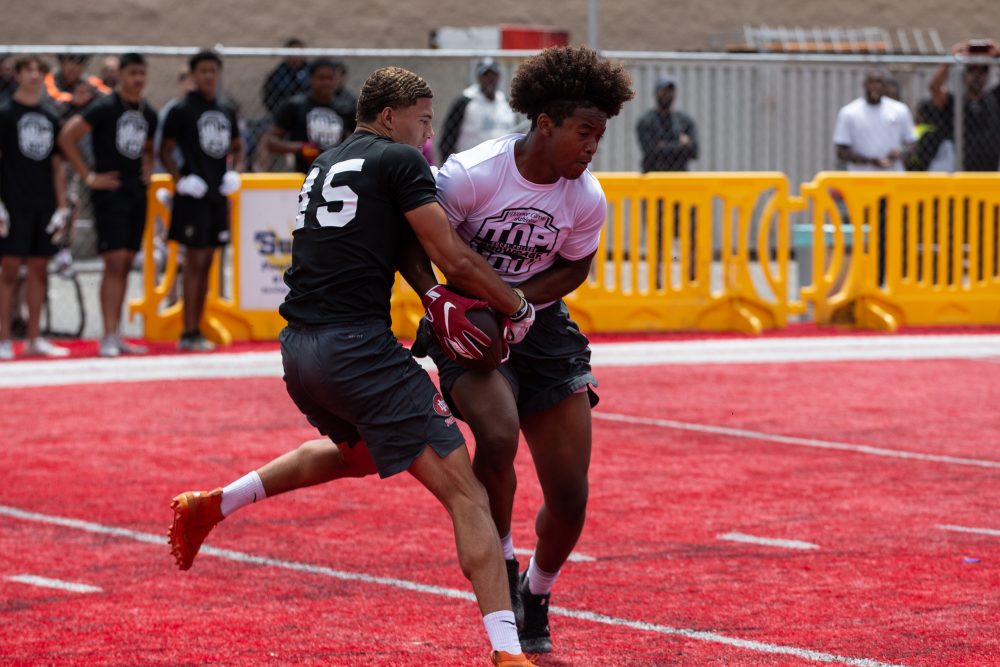 It has been relatively quiet on the recruiting trail for the Trojans of late, as today marks one month since the most recent USC commitment joined the class, when four-star cornerback Prophet Brown announced his pledge in mid-July.

With 18 verbal commitments at this point, there is still room for at least seven more prospects in this class. And perhaps more could join since there is always the typical late shuffling of guys in and out of the class, which could be exacerbated this year due to the uncertainty around signing day and any official or unofficial visits.

Not surprisingly, there haven’t been a ton of offers flying out from the Trojans, as there have been no in-person evaluation opportunities and at this point it makes some sense to hold off until the coaches can see some senior game film of those prospects who are still scheduled to participate in a football season this fall.

The most recent offer went out Tuesday, as 2022 four-star safety Trejon Williams (Portland, Ore./Jefferson) added USC to his growing list of offers. The 6-foot, 195-pound defensive back is the nation’s No. 167 overall prospect and No. 12 safety. He’s also the top-ranked prospect in Oregon, though he doesn’t yet hold an offer from the Ducks.

In the 2021 class, it will be interesting to focus on the offensive line during the remainder of this cycle. USC already has three commitments there to go with the six offensive linemen signed in the 2020 class, but it’s clear that position remains a priority. Until he signs with USC or elsewhere, the top offensive target for the Trojans will be offensive tackle Kingsley Suamataia (Orem, Utah/Orem), as USC coaches continue to chase him relentlessly.

These are not highly-ranked prospects by the recruiting services–Buchanan is a three-star and No. 1,211 in the nation, while Blair is unlisted in the composite rankings–and neither has an impressive offer sheet, with Buchanan’s best offers coming from Oklahoma State and Texas Tech, and Blair’s from Colorado, Syracuse and Virginia Tech.

But USC found a couple of very intriguing three-star linemen from Texas in the 2020 class, in Courtland Ford and Casey Collier, and it appears the hope is to be able to do it again. Oklahoma State, USC and Texas Tech all offered Buchanan on the same day, with Purdue and San Diego State offering in the following days. At this point, the Red Raiders are likely posing the biggest threat to the Trojans.

USC chased a few major prospects at center in this class, but they’ve committed elsewhere. Several of the 2020 signees were praised for their positional versatility, so it’s not out of the question that at least one could wind up at center, though a majority of them were high school tackles. Adding a center in this 2021 class could be fairly important, as Brett Neilon is heading into his redshirt junior season and Justin Dedich could be making a move to guard in order to get on the field. That would leave redshirt freshman Gino Quinones as the only available center depth on the bench, though other offensive linemen have worked on snapping during their USC careers. The Trojans could also be in a good spot for local 2022 center, Dylan Lopez (Moreno Valley, Calif./Rancho Verde).

One major 2022 target is off the board, as four-star athlete Dasan McCullough (Overland Park, Kan./Blue Valley North) announced his commitment to Ohio State. This is a major addition for a Buckeye program that is one of a few schools absolutely rolling on the recruiting trail right now. McCullough is a 6-foot-5, 220-pound safety/linebacker/cornerback and he’s the third top-100 prospect in Ohio State’s 2022 class now.

McCullough had a bit of a USC connection, as his father is former Trojans running backs coach Deland McCullough.

The Rivals 2022 recruiting rankings were released this week, as now the three major recruiting services have gone forward with their 2022 lists.

Local cornerback prospect Domani Jackson (Santa Ana, Calif./Mater Dei) checks in as the No. 2 recruit in the nation, as he continues the string of Southern California defensive standouts who register as must-get recruits for USC. The Trojans weren’t able to reel in defensive end Kayvon Thibodeaux in 2019 or linebacker Justin Flowe in 20202, but still have a good shot with defensive end Korey Foreman (Corona, Calif./Centennial) in the 2021 class.

Obviously, getting back into Mater Dei is going to be extremely important for USC in the 2022 class. The Trojans didn’t sign any Monarchs in the 2020 class and would likely have benefitted greatly from quarterback commit Miller Moss’ transfer to Mater Dei had football been allowed to happen this fall. Instead, many of the Monarchs’ best 2021 prospects are headed out of state, in linebacker Raesjon Davis, to LSU, and both wide receiver Kyron Ware-Hudson and cornerback Jaylin Davies, to Oregon.

The rankings offered another reminder of how important Las Vegas will be to USC recruiting in the 2022 class, as Las Vegas Bishop Gorman teammates in safety Zion Branch (No. 39 overall), linebacker Cyrus Moss (No. 71 overall) and running back Jaydn Ott (No. 177 overall) were joined by running back Jovantae Barnes (Las Vegas/Desert Pines)–No. 107 overall–in representing the city.

USC has a number of offers out to quarterbacks, including Murphy, though A.J. Duffy (Moreno Valley, Calif./Rancho Verde) could wind up as the top target there. He is the No. 72 overall prospect.

In terms of big-time national prospects, this class could test cornerbacks coach Donte Williams and defensive line coach Vic So’oto. The 2022 group is loaded with five-star corners whom USC has offered. In addition to Jackson, the Trojans have offered No. 3 Denver Harris (Houston/North Shore), No. 5 Jaheim Singletary (Jacksonville, Fla./Robert E. Lee) and No. 13 Will Johnson (Grosse Pointe, Mich./Grosse Pointe South)–all five-star corners.

It’s also a big year in states along the East Coast, where So’oto made a name for himself as a recruiter at Virginia and he’s been targeting prospects since moving to USC.

Defensive tackle Travis Shaw (Greensboro, NC/Grimsley), offensive tackle Zach Rice (Lynchburg, Vir./Liberty Christian) and linebacker Shawn Murphy (Manassas, Vir./Stonewall Jackson) are all five-star prospects ranked in the top 14 overall. But at this point there’s just no telling what kind of impact USC can have on prospects like that when they weren’t able to take unofficial visits.

If USC is forced to stay local, it’ll be another interesting year in finding linemen, as Greene is the only California offensive lineman among the top 250 recruits, and there are just two defensive linemen–both with USC offers–in No. 208 Gracen Halton (San Diego/St. Augustine) and No. 216 Dejon Roney (Etiwanda, Calif./Etiwanda).