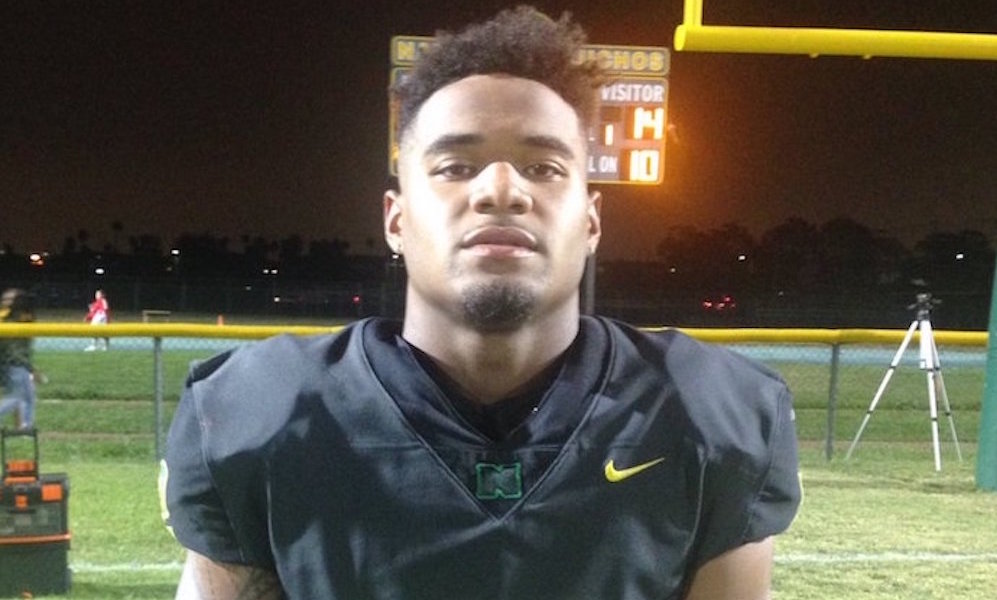 Harbor City (Calif.) Narbonne passed a big season-opening test this past Friday night at home, fighting back from a 14-0 third-quarter deficit to take down Gardena (Calif.) Serra 17-14. Keying the dramatic victory was an inspired effort by the Gauchos defense, led by USC-commit Raymond Scott.

The elite Class of 2018 linebacker not only did more than his part on the field, racking up 10 tackles, he also provided some much-needed veteran leadership.

“He didn’t allow the defense to turn on the offense,” said Narbonne head coach Manuel Douglas. “At halftime he was encouraging them, ‘come on, we’ve got you. You can do this.’ That’s what I want to see as a head coach. And that’s what an overall team win is, and that’s what this was, and it starts with seniors like that.”

It was the perfect start to the season for a Narbonne squad that made it all the way to the CIF-State championship game last season before falling to San Diego (Calif.) Cathedral Catholic.

“This was a big game,” Scott said. “We prepared throughout the week, we’ve been practicing, and we knew what kind of game it was going to be. We just had to come in and dominate, and that’s what we did.”

Scott was all over the place in the win, showcasing a physical brand of play to go along with excellent speed for a linebacker. At 6-foot-1 and 225 pounds, It’s obvious that he’s in tremendous shape right now, thanks in large part to a busy summer at work on the field and in the weight room.

“It was a long offseason for me, trying to improve my technique, my game and really everything – my game overall,” Scott said. “I was trying to work on things I’m missing, little things here and there.”

Scott originally committed to USC way back in April of his sophomore year, and he remains a Trojans pledge today.

“Everything is the same, my commitment is the same,” Scott said. “I’m still staying in touch with the SC coaches and everything. Coach Nansen, we keep in contact and we have a good relationship.”

At the same time, Scott hasn’t completely shut down the recruiting process by any means, and he actually took unofficial visits this past summer to Nebraska, Oklahoma, Oregon, Oregon State and Washington.

“I still keep in contact with other coaches too, building a relationship and staying in contact, trying to see where I might land in the future,” Scott said. “Really, I’m staying in contact most with, of course SC, and another school is Oregon, and Oklahoma.”

In an effort to ensure that USC is definitely the place for him, Scott is determined to take all five of his official visits, and right now, it looks like he will definitely be using one on a return-trip to Norman.

“There’s going to be some officials coming up for sure,” Scott said. “I’m not sure which ones, but Oklahoma will be one for sure.”

USC does have a leg up on the competition due to its proximity to home, however, and Scott said that he will definitely be on campus plenty this fall, including this Saturday to check out the Trojans’ opener against Western Michigan.

“Of course, I plan on going to a few games,” Scott said. “I’ll be up there supporting the team.”

Scott wasn’t the only prospect who shined in the Narbonne-Serra clash on Friday night. On the Gauchos offensive line, Class of 2019 tackle Jonah Tauanu’u certainly caught everyone’s attention as well.

Standing 6-foot-5 and 294 pounds, he’s a big, strong bulldozer who is athletic enough to also make an impact on defense at times at defensive tackle. He did a very solid job at left tackle against a talented Serra defensive front on Friday, with the Gauchos offensive line playing a key role in the victory down the stretch as they cleared a path for a Narbonne ground attack that found success when it counted most.

Receiving an offer from USC last December, he’s been on campus on numerous occasions in recent months, and it’s safe to say that he has serious interest in the Trojans. He also holds offers from Arizona, Boston College, Colorado, LSU, Michigan, Ole Miss, Nebraska, Oregon, UCLA, Utah and Washington State.

There’s no bigger match-up on the schedule this week than #1 Mater Dei hosting #2 Bishop Gorman (according to MaxPreps rankings). Both teams are absolutely loaded with elite recruits, including quarterbacks who are headed to USC (JT Daniels, 2019) and UCLA (Dorian Thompson-Robinson). Mater Dei also features the top receiver on the Trojan wish list in Amon-Ra St. Brown, as well as the top remaining linebacker target in Solomon Tuliaupupu. Bishop Gorman has the top committed linebacker for the Trojans in Palaie Gaoteote and an OL USC offer in Jacob Asaia, as well as DE Adam Plant, an Arizona commit who has always shown interest in the Trojans. The game will be televised Friday night at 7:30 on Prime Ticket.

* S Aashari Crosswell (Long Beach, Calif./Poly)
– Had four tackles (3 solo) and one pass deflection in the victory over Los Alamitos.

* TE Michael Ezeike (Ontario, Calif./Colony)
– Had four receptions for 77 yards and three touchdowns in a 53-7 victory over West Covina (Calif.).

* LB De’Gabriel Floyd (Santa Clarita, Calif./Golden Valley) – USC commit
– Caught a 24-yard touchdown pass, and he also came up with an interception in a 30-0 victory over Palmdale (Calif.) Highland.

*DE/TE Kayvon Thibodeaux (Westlake Village, Calif./Oaks Christian)
– Had four tackles (3 solo), and he also caught one pass for 15 yards in the loss to Chaminade.

* WR Johnny Wilson (Calabasas, Calif./Calabasas)
– Had seven receptions for 125 yards and one touchdown in the victory over Dorsey.