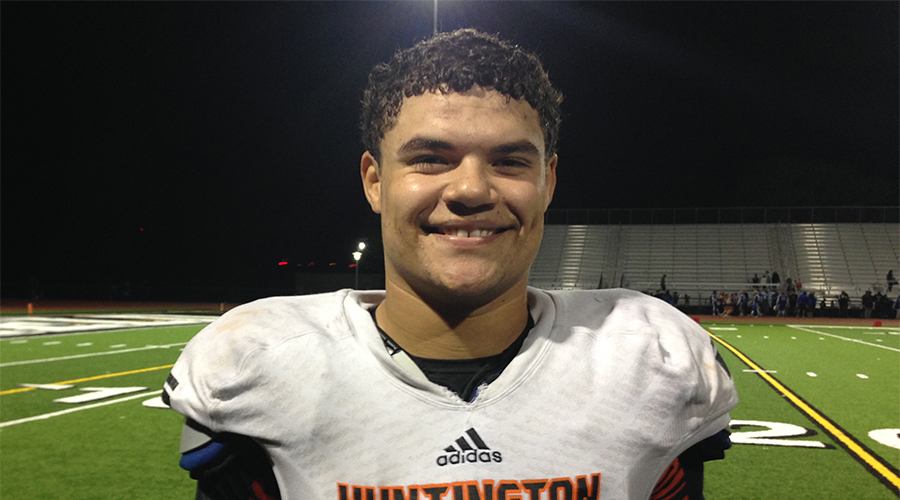 Liam Jimmons’ high school career reached its conclusion this past Friday night as Huntington Beach (Calif.) went down in defeat for the seventh time in ten games this season, falling to Fountain Valley (Calif.) by a final score of 37-22.

Jimmons, a Class of 2016 defensive end who gave a verbal pledge to USC last June, still managed stand out, however, making eight tackles on defense, including two tackles-for-loss and one sack, while also catching four passes from his tight end spot. And while his efforts weren’t quite enough to lead the Oilers to victory, he maintained a positive outlook following the game, making sure to give credit to the teammates who aided him in his development over the course of the last four years.

“All of the seniors I’ve been with, I’ve got to give props to every single one of these guys because I wouldn’t be the player I am without them,” said Jimmons, who stands 6-foot-4, 250 pounds. “In the future I just have to keep them in my mind, keep my family close to me and just stay humble. I can’t get cocky. I have to remember everybody who helped me along the way.”

And despite the mid-season dismissal of Steve Sarkisian as USC’s head coach, Jimmons said the future that he references still firmly revolves around the Trojans.

“I’m still completely committed,” said Jimmons, who is slated to play defensive end at USC, with the possibility also existing of him taking snaps as an emergency tight end. “Nothing has changed. Sark was a great guy and it was unfortunate what happened. I’ve talked to [Interim Head Coach] Clay Helton a couple times, and he’s a great guy too. He’s excited to have me. Coach [Chris] Wilson is a great D-line coach, [Running Backs Coach Johnny] Nansen, they all treat me well, so nothing has changed.”

Speaking of Helton, Jimmons, who was among those in attendance in the Coliseum this past Saturday for USC’s 38-30 victory over Arizona, is encouraged by the way that the Trojans have performed under his command.

“They’re getting some nice wins under their belt, some big wins,” Jimmons said. “All the props to Coach Helton for getting the team through this. It’s been really great to see.”

But for Jimmons, the decision to attend USC was never just about the coaching staff. The allure of the school itself was a major draw, as was the opportunity to play in front of friends and family, particularly his father, Edward, a former Marine and current member of the U.S. Army National Guard.

“My entire family can come to every game, and that’s honestly probably the biggest part,” Jimmons said. “My dad, he’s been on tours and he’s barely been able to see me play. He’s been in Afghanistan, Kosovo and Egypt, and I just wanted to stay close to home so everyone can watch me play. And just going to USC, not everybody can say that. It’s just an amazing place.”

Still, would Jimmons’ final decision be impacted in any way if Helton and the rest of the current coaching staff were to be replaced following the season?

“If the coaches aren’t there, I might open things up,” Jimmons said, “but they’re not gone yet, so we’ll have to see.”

For now, though, Jimmons is still all Trojan. Hoping to take his official visit to USC on the weekend of the UCLA game (Nov. 28), he’s on schedule to graduate from Huntington Beach early so that he can enroll at USC in January.

“I just want to get my mind into the program as fast as I can,” Jimmons said. “I want to start lifting with the team and participate in spring ball.”

– There were also a large number of unofficial visitors on hand for the Trojans’ victory over Arizona on Saturday, including Jimmons as well as fellow Class of 2016 USC commits Michael Pittman, C.J. Pollard, Keanu Salepaga, Nathan Smith and Trevon Sidney, Class of 2016 prospect Brandon Burton, Class of 2017 USC commit Thomas Graham Jr, and Class of 2017 prospect Chuck Filiaga.

– Ran for a 66-yard touchdown and caught three passes for 48 yards in a 16-14 victory over Lawrenceville (Ga.) Mountain View.

– Caught seven passes for 79 yards and one touchdown, while also picking up 61 yards on the ground on five carries in a 41-10 loss to Alexander City (Ala.) Benjamin Russell.

– Returned a kickoff 99 yards for a touchdown, caught six passes for 195 yards and two touchdowns, and compiled eight tackles in a 52-29 victory over Westlake Village (Calif.) Westlake.

– Had five receptions for 128 yards and two touchdowns in a 24-3 victory over Los Angeles (Calif.) Loyola.

– Compiled 10 tackles including one sack in the loss to Chaminade.

– Completed 17 of 29 passes for 169 yards and one touchdown with one interception and four fumbles in a 20-13 loss to South Torrance.

– Caught nine passes for 112 yards and one touchdown, while also returning a fumble for a touchdown in a 37-17 victory over Glendale (Ariz.) Apollo.

– Had four receptions for 163 yards and three touchdowns in a 50-7 victory over Seymour (Tenn.),

– Caught five passes for 79 yards and one touchdown in a 54-26 victory over Simi Valley (Calif.).

– Had six receptions for 177 yards and one touchdown in the victory over Simi Valley (Calif.).

– Cuaght two passes for 35 yards and one touchdown in a 63-7 victory over Las Vegas (Nev.) Cimonarron-Memorial.

– Caught one pass for 17 yards, and made six tackles with one sack in the victory over Westlake.

– Completed 14 of 19 passes for 312 yards and two touchdowns with one interception, while also rushing for 54 yards in the victory over Westlake.

– Rushed for 144 yards and three touchdowns on 23 carries, while also making 3 receptions for 23 yards in the victory over Serra.