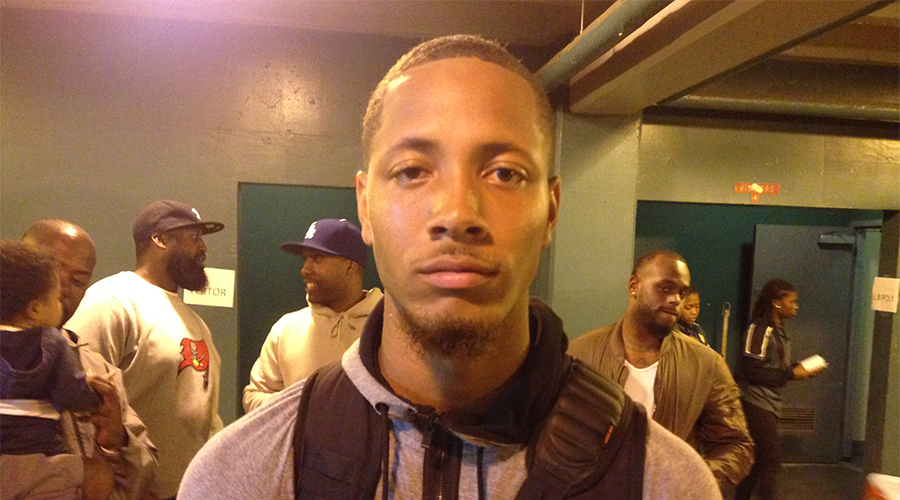 In the most highly anticipated high school clash of the week in Southern California, Long Beach (Calif.) Poly suffered a tough 12-7 loss to Mission Viejo (Calif.) on Friday night that dropped the Jackrabbits to 2-1 on the young season. But even in defeat, Jackrabbits Class of 2018 wide receiver Jalen Hall still managed to stand out, hauling in six passes for 125 yards.

Making Hall’s performance even more impressive was the fact that he was often times matched up against Diablos cornerback and UCLA-commit Olaijah Griffin – who had a stellar showing of his own in the game, which included a pivotal pick-six.

“I always look forward to competition like that,” Hall said. “They talked about it in practice, but really for me it’s nothing but work. I’ve been around nothing but competition, so that’s all it was. Have a little fun blocking, catching the ball, whatever it is, but it was fun going against good competition.”

Having just transferred to Poly from Los Angeles (Calif.) Hawkins last spring, Hall had to make a quick adjustment to a new school, a new offense and a new quarterback in Matt Corral – a former USC pledge who is now committed to Florida. And while there were some initial growing pains, the 6-foot-3 wide out believes that, ultimately, everything has worked out.

“It’s been a real different transition, especially in the beginning, getting the timing down with Matt. That took a little while at first,” Hall said. “But other than that, everything has been great – school, my education, the classes are getting me ready for college. I feel like, overall, the transition has been great so far.”

A household name in recruiting circles since his sophomore year, Hall has an offer from virtually every big-time program around. But as has been the case all along, he’s currently wide open with no list of favorites. That will change in the near future, however, particularly given the fact that graduating early from high school, and enrolling at his college choice in January, is now a very real possibility.

“I’m about to come out with some official visits and a top 5 or top 10 soon,” Hall said. “It’s finally that time. I’m trying to figure out whether or not I’m going to leave early, and if I am, I have to figure it out now, and then I’d commit in December.”

Hall hopes to take all five of his official visits, but he doesn’t have any of those set just yet. He does, however, have some unofficial visits lined up so that he can check out some of his suitors in action on the field.

“I went to USC for the Stanford game, and I’m going to Nebraska soon, I’m going to LSU when they play Auburn, and then I might make it out for a Florida game,” Hall said. “I’ll go to a UCLA game for sure too.”

While Hall has no leaders at this point in time, USC is a school that he is known to have definite interest in, and Trojans head coach Clay Helton was among the coaches spotted on the sideline during Hall’s game this past Friday night. The star receiver definitely took notice, but he was careful not to allow it to affect the way that he approached the task at hand.

“Hard work is something I preach all the time, so when I see a coach, it’s really nothing different. I’m supposed to be showing out anyway,” Hall said. “But I did see a couple coaches out there, and Coach Helton in particular, and I just knew that I had to keep grinding.”

A frequent visitor to the USC campus over the course of the past two years, Hall possesses a solid relationship with the Trojans coaching staff already. That, combined with the fact that two of his best friends, former Hawkins teammates Joseph Lewis and Greg Johnson, are now freshmen at USC, provides reason to believe that Helton and Co. will be in this race until the end.

“Coach Tee [Martin] and Coach Helton, I probably talk to them every other week,” Hall said. “I feel like I’m close to both of those guys.  I’ve been around them since 8th grade, and my boys are up there now, so they’re really on me now. Our relationship is real close.”

And speaking of Lewis and Johnson, Hall is certainly intrigued by the idea of playing on the same team with them, once again, but he won’t let it be a determining factor in his final decision.

“Those are my close boys, they’re like family,” Hall said. “Blood could make us no closer. They’re in a good position there, that doesn’t mean I would be. But it is great having my boys down there, and if I was there that would really be great.”

When he was on hand at the Coliseum for USC’s victory over Stanford a week-and-a-half ago, Hall paid special attention to the offense, and he admitted that he could definitely picture himself catching passes as a key member in it. At the same time, he’s also going to continue to keep an eye on the depth chart, an important factor in his decision.

The 6-4, 250-pounder also took an unofficial visit to USC this past summer. Couple that with the fact that he is originally from California, and that he still has family in the area, not to mention that he saw a dramatic Trojans victory over Texas in person, and there is reason to believe that USC has at least somewhat of a shot here.

He will also take official visits to Alabama, Ohio State, Oregon and Penn State before making a decision in January.

– Had four tackles (2 solo) with three tackles-for-loss, including two sacks as well as three quarterback hurries in a 30-24 victory over Mission Hills (Calif.) Bishop Alemany.

– Compiled seven tackles (4 solo), 2 for a loss, and one quarterback hurry in a 34-7 victory over Concord (Calif.) De La Salle.

– Had three receptions for 44 yards in the loss to Mission Viejo.

– Had nine carries for 20 yards, and he returned a kickoff 83 yards for a touchdown in a 25-19 loss to Washington (D.C.) Friendship Collegiate Academy.

– Had four catches for 58 yards, 37 yards rushing, and he also came up with an interception on defense.

– Completed 12 of 19 passes for 275 yards and three touchdowns, and he also had five carries for 42 yards and one touchdown in a 49-0 victory over Woodstock (Ga.) River Ridge.

– Had six catches for 125 yards in the loss to Mission Viejo.

– Caught three passes for 26 yards and one touchdown, and he had four tackles (3 solo) with two tackles-for-loss including one sack in a 48-21 victory over Paso Robles (Calif.).

– Had nine receptions for 147 yards and three touchdowns in a 62-14 victory over Oradell (N.J.) Bergen Catholic.

– Had two tackles (1 solo), one for a loss, in the victory over Bergen Catholic.

– Completed 19 of 25 passes for 299 yards and five touchdowns in the victory over Bergen Catholic.

– Caught three passes for 94 yards and one touchdown in a 69-14 victory over Los Angeles (Calif.) Dorsey.

– Had three tackles – all for a loss – including one sack, and he also took an interception back 20 yards for a touchdown in the victory over Bergen Catholic.

– Caught four passes for 49 yards in the victory over Bergen Catholic.

– Compiled two receptions for 16 yards and one touchdown, and he also had six tackles (5 solo), one tackle-for-loss, three hurries and one pass deflection in the victory over Bishop Alemany.

– Caught three passes for 52 yards and two touchdowns in the victory over Pacifica.

In this week’s podcast edition we talk official visits in-season vs out of season, who Randy saw last week, who he is planning to see this week, and the impact of social media through the lens of the Jackson Carman-Kirk Herbstreit incident