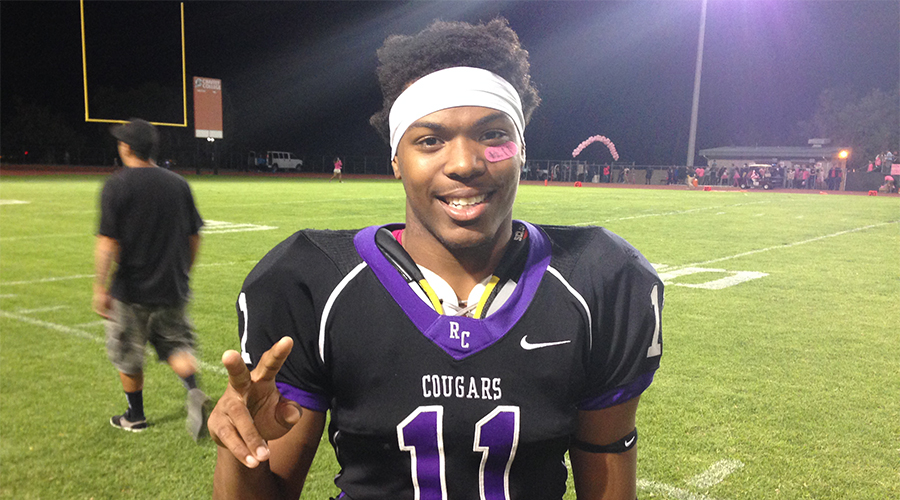 Class of 2017 cornerback and USC commit Thomas Graham Jr. wasn’t tested throughout much of Rancho Cucamonga’s (California) cross-town rivalry matchup with Rancho Cucamonga Los Osos this past Friday, but when he finally was, he made the most of it.

Thomas Graham Jr. has echoed a familiar theme among USC recruits, and that is his unwavering commitment to the Trojans. Tom Hauck/Student Sports
After keeping it on the ground offensively throughout a majority of the first half, Los Osos finally threw to Graham’s side late in the third quarter, with the ESPN Junior 300 athlete picking off the pass and returning it 76 yards for a touchdown in a 34-7 Rancho Cucamonga victory.

“All game they were running the ball, and then coach brought in nickel, so then I played against the slot,” Graham said. “When I saw it, I cut in front of the receiver, and I thought I jumped too early because I felt myself coming down, but I caught it, and I was lucky enough to have all of my teammates there to help me score.”

Graham, who is in his first year at Rancho Cucamonga after transferring from Eastvale (California) Roosevelt, has helped the Cougars compile a record of 6-2 this season with his play in the secondary as well as at wide receiver.

But it’s Graham’s play on the defensive side of the ball that has made him one of the most sought-after prospects in his class. He brought an end to the recruiting process last July, however, when he committed to the Trojans over the likes of Arizona State. Oklahoma, UCLA and Washington.

And while there was a big shakeup at USC recently, with Clay Helton taking over interim head coaching duties in place of the fired Steve Sarkisian, Graham isn’t wavering in his pledge one bit at this point.

It was Trojans defensive backs coach Keith Heyward who contacted Graham shortly following Sarkisian’s departure, making it clear that there was still a place for him at USC.

“He told me that my offer is still on the table and that he would love for me to stay,” said Graham, who plans to graduate from high school early and enroll at USC in the spring of 2017. “He sees me coming in and fitting at corner. He would like for me to come in and try to get as much playing time as I can my freshman year and help out the program.”

Graham’s reasons for originally choosing the Trojans went far deeper than the coaching staff. His sister, Jasmyne, is currently a freshman at USC in the track and field program. Thomas grew up in a household full of Trojans fans, and he’s wanted to suit up in the cardinal and gold ever since he can remember.

“I first grew up watching Reggie Bush, LenDale White, Taylor Mays and all of those guys, so I fell in love with USC back then,” Graham said. “I’ve always loved their style of play, and I’ve always loved how the coaches have coached there. I think even with Sark gone, they’re still going to bring in somebody with a big name who’s good enough to come help the program succeed and get back on track.”

A routine visitor to the USC campus who has been to every home game this year, Graham has built up a strong bond with a number of other commits, and from what he’s seen, the Trojans still appear to be in good shape on the recruiting front.

“Velus [Jones], I know he opened up his recruitment to other schools, but he’s still committed to USC. Other than that, though, everybody seems to be solid,” Graham said. “Most of the commits have a group chat, and we’re all 100 percent with USC, and we’re not looking to go anywhere else right now.”

— The Trojans offered Class of 2017 defensive back Bubba Bolden this past Friday. USC became the seventh program to offer the Las Vegas (Nevada) Bishop Gorman star.

— Another Class of 2017 standout who recently received an offer from the Trojans, linebacker Javaris Steward (Pomona, California/Pomona), gave a verbal pledge to USC early last week, only to have a change of heart and de-commit on the same day.

— ESPN 300 wide receiver Theo Howard (Westlake Village, California/Westlake) will announce his decision this coming Sunday. He is thought to be choosing between Texas A&M, UCLA and USC, among others.

– Caught two passes for 25 yards and one touchdown in a 34-2 victory over Downingtown (Pa.) Bishop Shanahan.

– Had five tackles in a 31-10 victory over Lakeland (Fla.) George Jenkins.

– Threw for 127 yards and three touchdowns, and rushed for 130 yards and one touchdown in a 40-14 victory over Chino Hills (Calif.) Ayala.

– Had five receptions for 92 yards and two touchdowns, and also caught three two-point conversion passes in a 43-21 victory over Evergreen (Ala.) Hillcrest.

– Caught seven passes for 181 yards and one touchdown in a 48-23 victory over Ventura (Calif.) St. Bonaventure.

– Had 11 receptions for 189 yards and one touchdown on offense, while also compiling one interception on defense in a 30-22 victory over West Hills (Calif.) Chaminade.

– Completed 9 of 24 passing attempts for 105 yards and three touchdowns, while also rushing for 83 yards and four touchdowns in a 69-0 victory over Torrance (Calif.).

– Had three receptions for 94 yards and two touchdowns in a 45-23 victory over Roan Mountain (Tenn.) Cloudland.

– Rushed for 360 yards and six touchdowns on 28 carries, while also catching two passes for 31 yards in a 55-37 victory over Brentwood (Calif.) Liberty.

– Caught three passes for 53 yards and one touchdown in the victory over Don Bosco Prep.

– Caught three passes for 59 yards on offense, and also had a pick-six at his defensive end spot in the victory over St. Bonaventure.

– Completed 22 of 31 passes for 288 yards and three touchdowns, while also rushing for 36 yards on nine carries in a 27-23 victory over Honolulu (Hawaii) Punahou.

– Completed 15 of 23 passes for 266 yards and one touchdown, while also rushing for two touchdowns in the victory over St. Bonaventure.

– Rushed for 35 yards and one touchdown on 10 carries, and caught 12 passes for 120 yards in the loss to Bishop Amat.