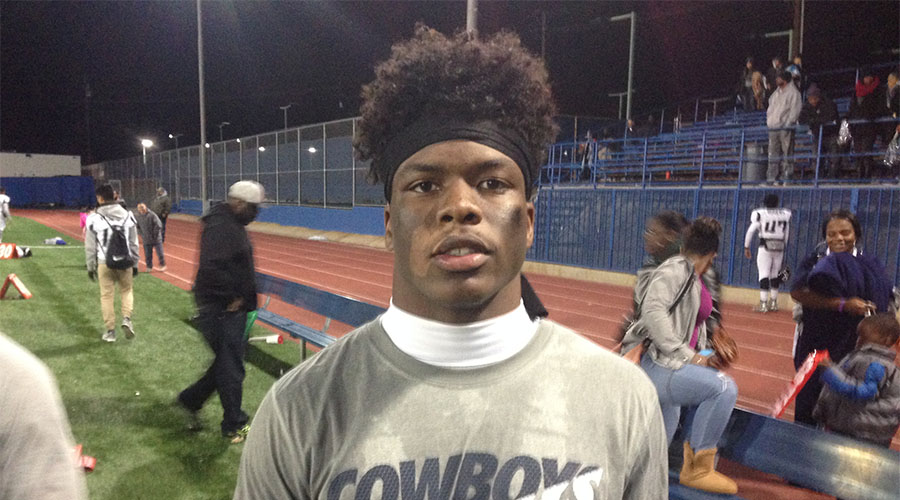 It wasn’t the way Stephen Carr wanted his junior campaign to come to an end, but even in a 35-30 loss to San Marino (California) in the CIF-SS Central Division semi-finals, the Fontana (California) Summit running back and USC pledge still managed to shine, rushing for 193 yards on 22 carries.

But rather than letting himself get too discouraged following the defeat, the Class of 2017 star was able to reflect back on the positives associated with what was a very solid 12-1 season for the Skyhawks.

“We did something nobody here has done before — we started out the season with 12 straight wins,” said Carr, the No. 61-ranked prospect in the ESPN Junior 300. “No other Summit team has done that. And the last three years, no Summit team has made it past the first round, so we made it two rounds farther.”

Having committed to USC last March, when he was still just a sophomore, Carr is now eager to see who the next full-time head coach of the Trojans will be. And whether it winds up being Clay Helton — the current interim head coach — or someone else, he’s confident Athletic Director Pat Haden and the USC administration are going to make a sound choice.

“I’m still committed to USC all the way,” Carr said. “I know they’re going to pick the right head coach to run the program, so I’m going to leave all of my faith in them, and let them do what they do.”

In regular attendance at the Coliseum this fall for USC’s home games, including this past Saturday for the Trojans’ 40-21 victory over UCLA, Carr has remained in steady contact with the current staff following Steve Sarkisian’s dismissal as head coach in mid-October.

“Coach [Johnny] Nansen and Coach [Peter] Sirmon, they always send me videos,” Carr said. “We just have small talk, and we chop it up every once in a while. It’s really cool.”

Carr has also been talking regularly with a number of other USC commits from his class as well as from the Class of 2016, many of whom he’s already started to build solid friendships with.

“We all have a group chat together — all of the USC commits,” Carr said. “We just have a lot of fun getting to know each other, so once we get up there we’ll already have that great bond.”

Still, as just a junior, Carr is being heavily pursued by a number of other schools as well, and he’s keeping an open ear just in case.

“I’m still hearing from Nebraska, Notre Dame, Oklahoma and some others,” Carr said. “I’ll always keep my mind open because anything can happen.”

For now, though, unless something unforeseen does take place, Carr is focused on USC, not to mention coming back better than ever as a senior for Summit in 2016.

“We’ve got a lot of motivation,” Carr said. “I’m really going to start grinding, I really am. I’m going to come back harder.”

— Class of 2016 wide receiver Josh Imatorbhebhe (Suwanee, Georgia/North Gwinnett), who has already signed financial-aid papers with the Trojans, took an official visit to USC this past weekend and was on hand for the Trojans’ victory over UCLA. He was also spotted at practice at USC on both Tuesday and Wednesday.

— Class of 2016 USC offensive line pledge Nathan Smith (Murrieta, California/Mesa) took an official visit to Nebraska this past weekend, but remains committed to the Trojans.

— ESPN 300 offensive tackle E.J. Price (Lawrenceville, Georgia/Archer) released his top 5 this past Saturday, and USC made the cut along with Oklahoma, Michigan State, Georgia and Auburn.