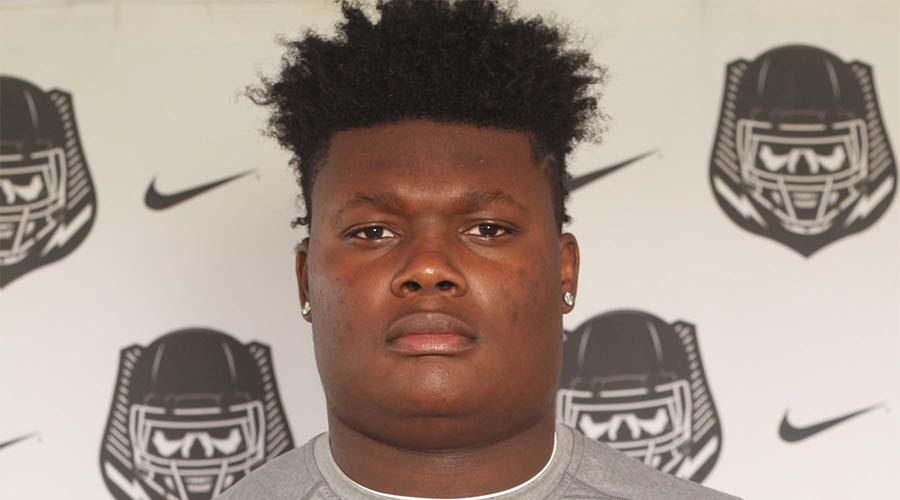 Trojans commit Keyshon Camp (Lakeland, Fla./Lake Gibson) took an official visit to USC earlier this month, and it’s safe to say that the trip left a positive impression on the ESPN 300 defensive tackle.

Having given a verbal pledge to the Trojans this past June following his participation in the Rising Stars Camp, the focus of his return trek was to get a taste of the game-day experience at the Coliseum during their matchup with Arizona – a contest USC came out on top in, 38-30.

“I had a great time on my official out there,” Camp said. “I got to hang out with the coaches, toured the campus and everything like that. I really already saw a lot of the school when I was out there this summer, so what I really wanted to see this time was the game atmosphere, and it was really cool. The fans were really energetic and it was a good game. They won.”

Standing 6-foot-4 and 269 pounds, Camp possesses an attractive combination of size and athleticism. While on his visit, he had a chance to talk about his potential future role at USC with Defensive Line Coach Chris Wilson, with whom he’s been in constant contact with throughout the process.

“We have a good relationship,” Camp said. “We talk all the time – every week. They want me to come in and play defensive end – where Greg Townsend plays.”

Since the time of Camp’s commitment, however, there was a marked change at the top at USC, with Clay Helton stepping in as interim head coach following the firing of Steve Sarkisian last month.

Despite the highly publicized changeover, Camp says that he’s still all USC.

“Nothing has changed,” Camp said. “I’m a solid commit. I committed because of the school. I really like it because of the networking out there, and the academics.”

While the Trojans have won four of five games since Helton took the reins of the team, it’s still anyone’s guess at this point as to who will wind up as USC’s permanent head coach next season. But with Camp so heavily focused on aspects outside of football, he sees himself sticking with the Trojans even if the current staff is replaced – at least for now.

Still, in an effort to have something to compare USC to, Camp – who has already taken an official visit to Michigan – intends to check out some other schools in the coming months.

“I’m taking a visit to Alabama on Dec. 11, and then I might be taking an unofficial back to Michigan for their game against Ohio State,” Camp said. “I might take some more, but I haven’t set any.”

Oregon, Pittsburgh and Texas are some of the other schools that Camp has expressed interest in visiting, and with Lake Gibson having gone down in defeat 21-13 to Brandon (Fla.) in a Florida 6A region quarterfinal playoff game this past Friday night, those other potential trips could take place much sooner than later.

– The USC coaching staff also recently extended an offer to Class of 2016 defensive end Semisi Lauaki (Lawndale, Calif./Leuzinger). Currently committed to Utah, he was among those in attendance at USC’s most recent home game against Arizona.

– Class of 2016 USC wide receiver commit Velus Jones (Saraland, Ala./Saraland) took an unofficial visit to Mississippi State this past Saturday for the Bulldogs’ matchup with Alabama. Jones will take an official visit to Oklahoma this coming weekend.

– Caught four passes for 125 yards and two touchdowns in a 56-8 victory over Long Beach (Calif.) Jordan.

– Compiled eight tackles with one tackle-for-loss in a 38-20 victory over Westlake Village (Calif.) Westlake.

– Caught seven passes for 127 yards and two touchdowns in the victory over Norco (Calif.).

– Compiled 10 tackles and one pass deflection on defense, and had a 43-yard run on offense in a 27-7 victory over Lake Cormorant (Miss.).

– Had two tackles and one interception in a 70-29 victory over West Hills (Calif.) Chaminade.

– Caught six passes for 94 yards and one touchdown on offense, while also making an interception on defense in a 54-0 victory over Queen Creek (Ariz.).

– Caught an 87-yard touchdown pass, and also made a game-saving pass break-up on fourth down in a 28-25 victory over Knoxville (Tenn.) Fulton.

– Caught six passes for 155 yards and one touchdown in a 63-13 victory over Las Vegas (Nev.) Bishop Gorman.

– Completed 15 of 18 passes for 376 yards and three touchdowns, and rushed for 58 yards and two touchdowns on seven carries in a 56-30 victory over Mililani (Hawaii).

– Completed 9 of 11 passes for 204 yards and five touchdowns in the victory over Long Beach Jordan.