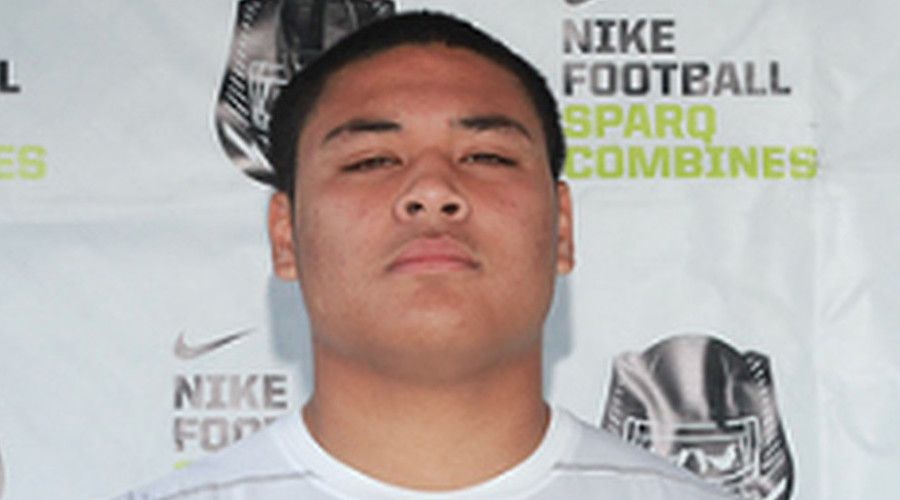 USC head coach Clay Helton and his staff secured their seventh verbal pledge for the upcoming signing class on Sunday in the form of Cerritos College defensive tackle Dillon Faamatau.

A Norwalk product, the 6-foot-4, 305 pounder redshirted as a 2015 freshman at Arizona State before transferring to Cerritos, where he played this past fall. He is expected to be a mid-year enrollee.

He joins Tuli Letuligasenoa as the second defensive tackle commit for the Trojans for the 2018 signing class. With the Trojans having just landed four heralded interior defensive linemen from the Class of 2017, it will be interesting to how many more prospects, if any, that the USC staff decides to bring in there, especially considering the fact that they could have less than 20 rides to hand out in the next cycle.

One thing is for sure, Helton and Co. are building up more depth and talent along the defensive line than we’ve seen in years at USC.

If you’re a Trojans fan, it might be a good idea to check out Long Beach (Calif.) Poly in action this fall. Not only did Class of 2018 USC quarterback commit Matt Corral transfer to the SoCal powerhouse from Westlake Village (Calif.) Oaks Christian earlier this offseason, but word got out last week that the Los Angeles (Calif.) Hawkins duo of wide receiver Jalen Hall and safety Aashari Crosswell have also enrolled there.

Standing 6-foot-4, Hall is one of the top wide receiver prospects in the entire nation. Crosswell, meanwhile, is a speedy safety with outstanding instincts and cover skills. Both players figure to provide a big boost to the Jackrabbits, and each is known to hold the Trojans in high regard. That’s no surprise when you consider the fact that Hawkins, the school they transferred in from, produced two players alone in Greg Johnson and Joseph Lewis who inked with USC this past signing day.

It should be especially fun to watch Corral heave up passes in the Poly offense, not only to Hall, but also to elite 6-foot-5 tight end/wide receiver Camren McDonald – another prospect whom the Trojans are known to covet, and who has shown reciprocal interest.

With Corral, who is a vocal recruiter for the Trojans, now on the same team as all three of these prospects, one can only assume that USC’s odds of signing each of them has gone up.

The dates of all five of USC’s summer football camps were recently announced, with a major revelation emerging – that the Rising Stars Camp is now split up into two separate days – June 11 and June 25.

And there was one more tidbit that is definitely worth taking note of – the fact that there are some guest coaches scheduled to attend from some other big-time programs including Michigan State, Northwestern, Wisconsin and Michigan. And yes, word is that Wolverines Head Coach Jim Harbaugh is expected.

The fact that coaches from other programs will be there to help out isn’t exactly new. It’s a common practice, and typically the other staff will return the favor, allowing coaches from USC to be on hand at their camps.

What is different is the stature of some of the programs represented this time around, and more importantly, the reputation of Harbaugh, who is known to be one of the most aggressive recruiters around.

* The Oregon Ducks landed a pair of Class of 2018 safeties who were on the Trojans’ radar on Sunday in Steve Stephens (Fresno, Calif./Edison) and Adrian Jackson (Denver, Colo./Mullen). Jackson’s pledge came as somewhat of a surprise. He had been naming Ohio State as his leader for quite a while now, and it looked like USC was right behind the Buckeyes. He took an unofficial visit to Oregon this past weekend, however, and the experience obviously left a big impression. Stephen’s commitment, on the other hand, was expected.

* Prized Class of 2018 wide receiver Justyn Ross (Phenix City, Ala./Central) released his top 11 last week, and the Trojans were included along with Alabama, Auburn, Clemson, Florida, Florida State, LSU, Miami (Fla.), Ole Miss, Mississippi State and Ohio State. Residing less than an hour from Auburn, the Tigers could be tough to beat in this one.