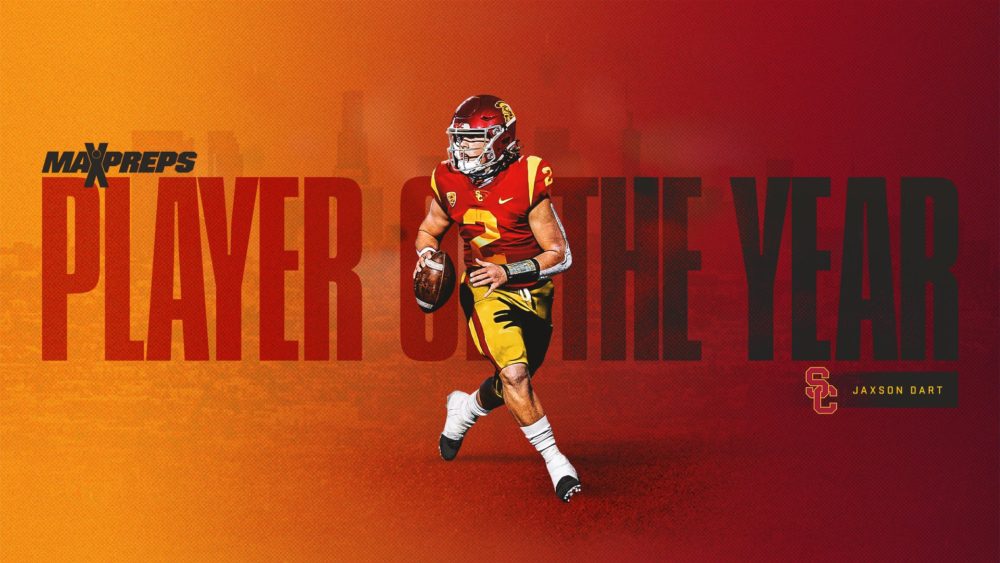 The lack of a high school football season in California this past fall meant future Trojans would be far less represented than usual on the MaxPreps All-America Team. But USC was still front and center, as Trojan quarterback signee Jaxson Dart was named the Player of the Year.

Dart had an unbelievable senior season, as he led Corner Canyon to a 14-0 record and broke Utah’s single-season record with 67 passing touchdowns.

Dart completed 69% of his passes for 4,691 yards and those 67 scoring throws came against just four interceptions. He was also a major threat on the ground, as he ran for 1,195 yards and 12 touchdowns.

Dart was one of the few true recruiting battles USC was involved in, leading up to the early signing period. The Trojans offered Dart in early October and went up against Arizona State, BYU, UCLA and others in hoping to land the four-star quarterback.

Grabbing a second quarterback in the 2021 class was a priority for USC, as the Trojans landed four-star signal-caller Miller Moss (Mission Hills, Calif./Alemany) earlier in the process and Moss remained unflinchingly committed throughout the recruiting cycle. USC also held a commitment from four-star quarterback Jake Garcia (Grayson, Ga./Grayson) when the coaches offered Dart, as the Trojans rolled the dice that they could still land two quarterbacks while juggling three.

Dart will enroll early at USC and both he and Moss will be on hand for spring ball, as the two signees will immediately start the competition to position themselves as the USC quarterback of the future whenever Kedon Slovis departs.

This marks the third time in the last four years USC has signed the MaxPreps Football Player of the Year, as wide receiver Bru McCoy was named in 2018 and quarterback JT Daniels was chosen in 2017. Former USC commit and Alabama quarterback Bryce Young was selected in 2020.