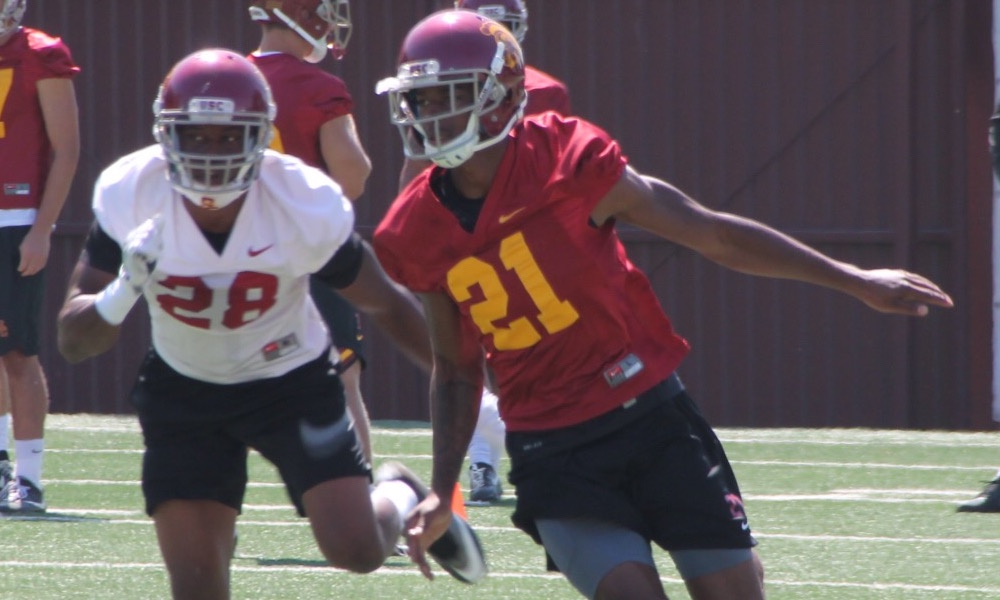 With the Trojans set to take part in a rare Friday night matchup against Washington State this week in Pullman, Clay Helton’s squad hit Brian Kennedy-Howard Jones one day earlier than usual on Monday, and the USC head coach was pleased with what he saw, particularly given the fact that his team is just two days removed from their victory over Cal.

“I credit our coaches, there’s a lot of late nights and a lot of people sleeping on their couches right now,” Helton said. “We knew this was going to be the case, 12 straight games, and we kind of targeted this game coming off a road week against Cal, and credit to our kids for coming out with tremendous effort, tremendous focus, they know how important this is as a Pac-12 game.”

The Trojans were missing some key faces, however, especially at the wide receiver spot where Deontay Burnett (shoulder) and Velus Jones (undisclosed) joined Steven Mitchell (groin) on the sideline with injuries of their own.

With those three pass-catchers out of action, the primary trio that lined up with the No. 1 group consisted of Tyler Vaughns and Jalen Greene on the outside, and Trevon Sidney in the slot, although Greene also saw plenty of time in the slot, and Michael Pittman Jr. rotated in on the outside.

Of that group, no one made a bigger statement with his play than Vaughns. The redshirt-freshman has been making steady strides this season, and on Monday he absolutely stole the show.

It began in the one-on-one period when the La Puente (Calif.) Bishop Amat product came up with three highlight-reel grabs that culminated in a beautiful diving catch deep along the sideline with Dominic Davis in coverage. His excellent play continued in the 7-on-7 period where he made another diving catch on a pass from Sam Darnold, this time for a gain of close to 15 yards. Vaughns finally capped his afternoon off by hauling in two long touchdown passes from Darnold in the final 11-on-11 period. The first of those was a 30-yard scoring grab along the sideline where he beat Isaiah Langley, and the second was another 30-yard touchdown catch – this time over the middle – with Greg Johnson in coverage.

“I think the light started to come on for him two weeks ago, and even though the ball didn’t get to him a ton, if you look at the film he got open a lot,” Helton said. “I saw the chemistry with Sam, for him to pull the trigger in overtime in the back of the end zone, that’s a lot of trust and that’s what you want. You saw it out there today, Deontay gets a rest and 21 is getting a lot of balls thrown his way. He’s put in a lot of work and the light’s coming on, it’s good to see.”

Helton noted that Burnett and Velus Jones are both day-to-day, with no further update provided on Mitchell. If any of those players are not ready to go on Friday, Tee Martin is confident that the offense can still function can play at a high level with the receivers available. Following practice the USC offensive coordinator was complimentary not only of Vaughns for the way that he practiced, but also other younger players like Pittman, Josh Imatorbhebhe and Sidney.

While Vaughns was the big story of the day, the defense still came up with some standout plays of their own. Cornerback Jalen Jones was up first in a service team period with a nice interception on a pass outside from Matt Fink to Pittman. During a later 11-on-11 period Fink was intercepted again, this time by Ajene Harris who took it to the house.

– In addition to Burnett, Velus Jones and Mitchell, others who did not participate in practice were Porter Gustin (toe/biceps), Daniel Imatorbhebhe (hip) and Aca’Cedric Ware. Helton said that there is no change regarding the status of Gustin, and that he is doubtful for this week’s game.

– Harris was back running with the No. 1 defense throughout a majority of practice at the nickel spot.

– Malik Dorton lined up in place of Green at defensive tackle during the 11-on-11 periods.

“Credit to coach [Mike] Leach, he’s got his team playing extremely well in all phases. Offensively you look at how [Luke] Falk is playing right now, basically a 77% completion percentage, 14-to-1 TD to interception ratio, about as efficient of a QB as there is in our league. I’ve been impressed with [Jamal] Morrow and [James] Williams, not a ton of carries but you look up and Williams is leading the team in catches, and they have 50 catches between them. Defensively I’ve been impressed with the middle of their defense and it starts with [Isaac] Dotson at the Mike linebacker position, [Jalen] Thompson at free safety, and then Hercules Mata’afa at DT, I don’t know if there’s a better tackle for loss guy that we’ve faced this year. Going up to Pullman, great fans, it’s going to be an electric atmosphere on Friday night. Great for college football, it will be a great Pac-12 game.”

Cary Angeline is no longer on the roster. Anything more on that?

“No, Cary is a great kid, wants to find a place closer to home to be able to play. Unbelievable student and person, wish him nothing but the best.”

Were you surprised at all?

“It happens sometimes when you’re a long way from home. He’s such an awesome kid, that to have the opportunity play closer to home, to maybe play a little bit more, I don’t ever want to hold a kid back from that.”

“I just told them one of the special things about our country is the freedom to speak your mind. The opportunity to do that is a beautiful thing. We talked openly about certain subjects, how to handle subjects. We’ve got very good kids here and an unbelievable campus that allows for open opinions and open minded-ness, and that’s a beauty of our country.”