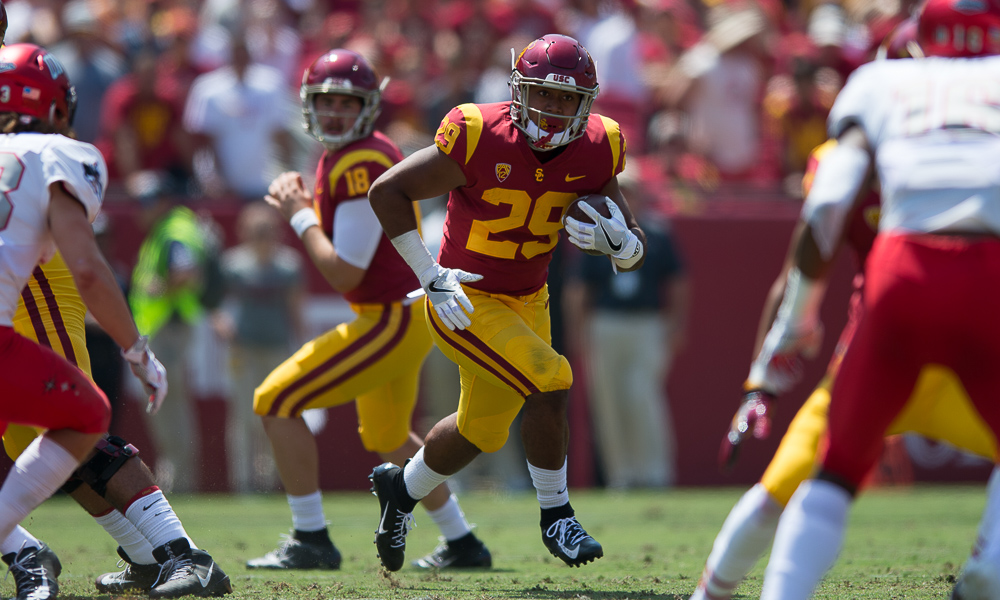 The Trojans held a full pads practice on Tuesday as they continue preparations for the first Pac-12 South opponent of the year.

The practice included a full contact drill on Brian Kennedy Field that got started with Vavae Malepeai going down the right sideline for a nice gain. Vavae also went up the middle for a long run. Cameron Smith had the biggest pop of the drill with a hit on Markese Stepp, and Talanoa Hufanga came up quickly on another play to hold Stepp to no gain. We also saw Aca’Cedric Ware show a nice burst down the left sideline.

It remains to be seen how the backs will be rotated in the game as Ware recovers from a knee issue that caused him to be limited in practice last week. Against WSU, Vavae Malepeai continued to be effective getting into the end zone and Stephen Carr provided yet another big run from scrimmage.

“Last week’s game was different with Ced being out,” USC coach Clay Helton said. “We didn’t get a lot of plays last week so our rushing numbers were good but they could have been better. I thought the o-line stepped forward and I hope they have another game like that assignment-wise on Saturday.”

As usual there was a lot of work on special teams, Michael Pittman blocked a field goal.

“It’s our first Pac-12 South game, which makes it so important for controlling our own destiny. Offensively, Khalil is nursing an ankle issue so they’ve been more of an RPO team while mixing in some play action. They have been leaning on JJ Taylor in the run game and he’s been very good. They are averaging 7 yards per play. They changed up their defense after the second game and have been going with more of a four-man front. It fits their personnel, particularly their two ILB’s, Schooler and Fields.”

Helton thoughts on chemistry between J.T. Daniels and receivers

“I really felt like we were getting close last week in practice and I talked with Tyler about it. I look at that throw to Pittman at the end of the half, that was a trust throw, J.T. had to get rid of it and trust that Michael would be there, and it was a hell of a catch and a good job to get his foot down.”

Helton on progress of J.T. Daniels

“He has no conscience, the great ones don’t. He just lets it fly. He has so much confidence in his arm and I wish everyone could see his demeanor on the sideline.”

J.T. Daniels on if he had a favorite throw from Friday night

Daniels on his trust factor with receivers right now

Daniels on his comfort level with offense