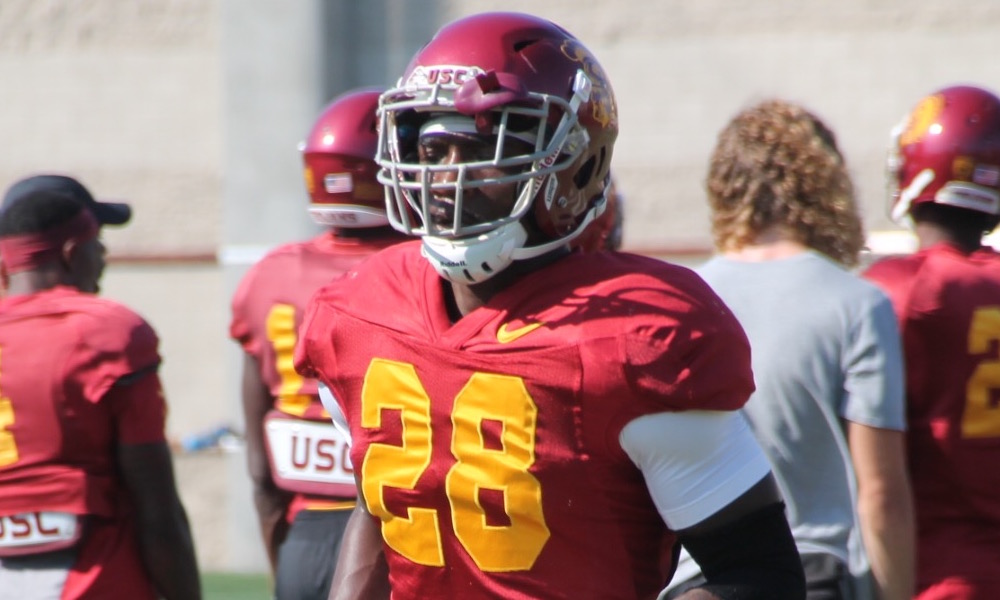 The Trojans were back to work on Tuesday with preparations to face Cal, and it’s clear that injuries remain an issue following a tough game against Texas.

Right away when practice started you noticed that Porter Gustin and Rasheem Green were not on the field, and Uchenna Nwosu and Ronald Jones left early. It was good to see Marlon Tuipulotu back, and Michael Pittman got a lot of work as well.

Helton was asked about the difference between this year and last year, and if the current injury list in the last would have been a bigger problem with less depth.

“Yeah, I was talking about this on the media conference the other day. If it was a year ago I would be really worried right now. We stayed healthy with our one’s last year. But I look at our depth right now, and I see guys like Christian Rector going in, and Wole [Betiku] going in, Connor Murphy going in making plays. Even Tyler Vaughns is starting to show life, making four big catches for us in the game the other day. So, our two’s are stepping up. Now, if we had a couple more injuries in this game, now I’m going to get worried, but I think we have adequate numbers, and I have a lot of faith in the guys that have stepped up, especially in that last game. I was just bragging on Christian Rector to our team. You never know when your opportunity is going to come, and he made the most of it.”

There was a lot of special teams work. During a kickoff coverage drill, Dominic Davis took a kick back for the scout return team. In the field goal drill, both Jackie Jones and Iman Marshall had blocks, while it was Chase McGrath and Reid Budrovich taking the kicks. There were also some punt drills.

During a 7-on-7 drills, Cary Angeline made the catch of the day on a post route across the middle with Marshall literally all over his back. Ykili Ross had a pick. John Houston forced an incompletion when he arrived at the same time as the ball against Erik Krommenhoek. Randal Grimes did a nice job to use his body shield Greg Johnson on a slant and a catch.

There was also a run drill that featured no receivers or DB’s and it was physical, at one point it was 1’s vs 1’s. Aca’Cedric Ware had the best run of the drill when he fought through the left side for a nice gain. While the run drill was going on there was 1-on-1’s with receivers and DB’s on Howard Jones Field, Grimes went over Marshall for a catch and Trevon Sidney made a nice grab against Ross.

During the team drills, Jamel Cook made a nice play to tip a ball away from Tyler Vaughns on a deep sideline route. Sam Darnold hit Deontay Burnett open about 25 yards downfield. Sam tried to dump a short pass to Stephen Carr but the ball hit Chris Brown in the shoulder as he tried to move upfield for a block. Darnold threw low to Sidney but he made a diving grab against coverage from C.J. Pollard. Ware took a pitch to the left but Grant Moore slid down the line of scrimmage to hold the play to a short gain. Matt Fink hit Jake Russell with a 20 yard pass down the middle, and it brought a “nice play Jake” from Clay Helton.

Among the guests at practice today were Hershel Dennis and Dennis Thurman.

Yeah, Stephen has been doing a wonderful job. He doesn’t act like a freshman. You always can tell by the way they look in the huddle. You know, you look at their eyes, and you basically say, ‘yeah, that one is ready. That one is ready. There’s the big deer in the headlights.’ And in Stephen’s case, in the first three games he’s just had a blast. I don’t know if there’s been a kid having more fun that’s been out there. And he’s doing a really, really nice job. And then you’re talking about Chase, and to be in that moment not once, but twice, and the look he had in his eyes, there was no doubt in my mind that he was going to make the kick. I actually shook his hand and said, ‘hey, congratulations. You’re getting ready to make this thing and win it for us.’ And he just goes out there and drills it like it’s nothing. So, credit to those two kids. Again, two kids that, when their time came, they made the most of it.

Is there any kind of special preparation that needs to take place to get a freshman ready to perform at this level?

No, I think that everybody’s light just comes on just a little bit differently. And in Stephen’s case it was kind of like an Adoree’ Jackson, or a JuJu Smith-Schuster, a Nelson Agholor, a Robert Woods…he just stepped on the field and he was ready. And there’s guys where it takes a couple games, and I started to see that with Tyler the other night. He looked more comfortable. I started seeing it with Joseph Lewis, he started to look more comfortable. So, it all takes time. Sometimes it’s one day, sometimes it’s a hundred days. Everybody is different.

Why are you confident enough in a freshman running back like Stephen Carr to call his number in a late drive in a pass down the field?

I’ve always thought that, as a coach, you have to trust the people that are around you. If you put them out on the field that means you trust them, so don’t be scared to call a play. It’s a play that he’s practiced a lot out here. You know, it’s a play that’s designed for both Velus [Jones] and for Stephen. We actually had the play called with Velus, and he was out there, and Texas called time out. We actually switched Stephen in thinking we might get a different call from them. We put Stephen in there, and they actually checked, it looked like a split safety, and we had a one-on-one matchup with a MIKE [linebacker], and Stephen did an excellent job. I’ve always believe in trust. Trust your kids and they’ll get the job done for you. You’re the coach. You’ve trained them so you can better trust them.

When you took over as head coach at USC, you had to make some personnel decision and let some coaches go, including Justin Wilcox. How difficult was that to go through that with him?

It was really hard because he had done a great job. Justin is a great coach. He’s a defensive brilliant-minded coach. For us it was just a difference in philosophy. I’m a strong believer, as you know, our defense now is four-down, and Justin was a 3-4 guy. I can only be the head coach at USC one time, and I kind of knew what I wanted. But I have the utmost respect for Justin as a coach, as a person, and obviously everywhere he’s been, he’s been successful. He was at Wisconsin, he did a heck of a job, and now he’s at Cal, 3-0. So, credit to him, he’s a good ball coach.

Have you had any contact with Justin Wilcox since then?