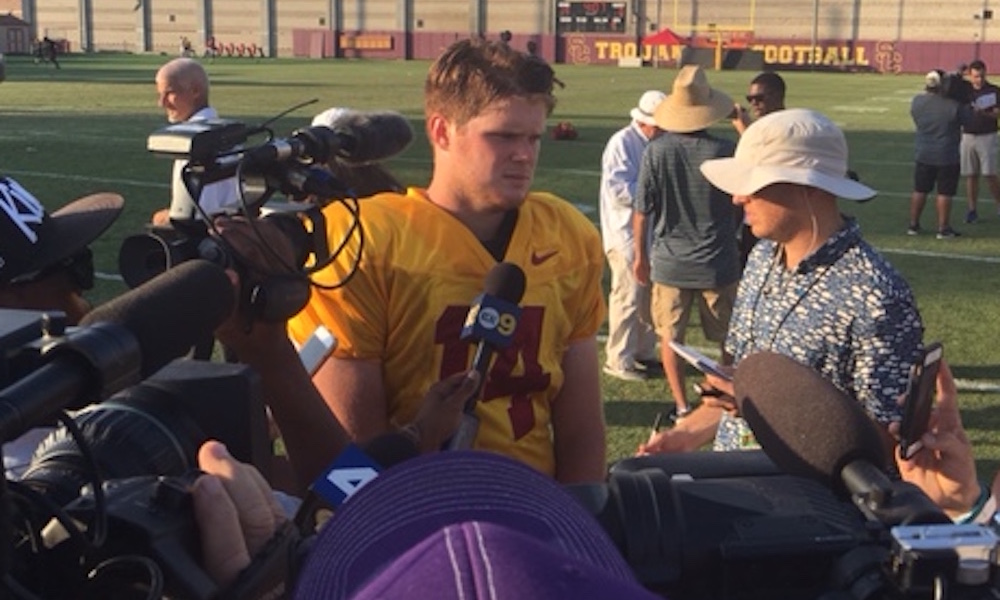 It’s game week for the Trojans and the team responded with a Tuesday practice that head coach Clay Helton said was “by far” one of the best of fall camp.

“I like history lessons,” Helton said. “And when I look back on all the excitement over last year, the reality is we were a 3-loss team. So the lesson is that the games in September count just as much as the ones later in the year. I was really watching today to see how they approached this practice, and they did a great job.

One of the big updates of the day was the fact that Viane Talamaivao was back in his regular right guard spot after battling foot issues for the past week. The presence of Viane allowed Andrew Vorhees to move back to RT but you get the sense there would be no hesitation to put Vorhees at guard if needed. With Viane back, the offensive line is now featuring the line that all Trojans were hoping to see with the presumed starters healthy, led by the trio of veterans in Viane, Toa Lobendahn and Nico Falah.

“One huge difference between this opener and last year, besides the opponent, is that our OL has come together the way that they have,” Helton said. “We’ve got our three rocks of stability out there and that helps me sleep at night. Our quarterback situation is also established, which is reassuring. Those two things are the biggest differences.”

There are a lot of eyes on the placekicking competition as the season opener approaches. In this practice Michael Brown was 4-6 while Chase McGrath was 3-6. Both kickers made a long of 49 yards, and both had a kick blocked by Jackie Jones.

There was also a punt drill backed up in the end zone with crowd noise piped in.

As for the team drills, things got going early in a skeleton passing drill which saw Joseph Lewis use his big body well to shield Jackie Jones and put him on the ground. Helton said after practice that Lewis has looked strong and he will play on Saturday, he said Randal Grimes might play as well but he said Lewis is ahead as far as the two freshmen are concerned.

Sam Darnold hit Velus Jones with the prettiest completion of the day, as Jones simply pulled away from walk-on linebacker Christian Herrera. There was also a nice completion across the middle from Sam to Steven Mitchell with Marvel Tell in close coverage. Tyler Petite used his outstretched arms to bring in a pass, and Velus caught another deep pass. Josh Falo got a lot of action and looked good. The biggest hit of the day came from Ajene Harris along the sideline against Jake Russell.

Helton, who played high school ball in the Houston area and at the University of Houston while his father was the head coach, also made a point to acknowledge the Hurricane impact on his hometown, and to ask those to help if they can.

Injury-wise, it was great to have Viane [Talamaivao] back. He looked really good today. I anticipate him being ready for the game. Daniel Imatorbhebhe got some really good work today. I’m going to continue watching him through the week, and make a decision later in the week. Michael Pittman we held today. I think he’s doubtful for the game, to be honest. We’ll see how it goes later in the week. And Keyshawn Young right now still has a hamstring. It sounds like he can practice later in the week. We’ll see where he’s at. Today we had one ankle sprain with Liam Jimmons. Looks like a high ankle, so we’ll see how long that is. And we held Isaiah Langley a little bit for quad tightness, so we’ll see how that is in the next couple of days.

“In studying this Western Michigan team, they have kind of the three phases that you really hate seeing as an opposing coach. It starts with their defense – being able to have that core back, and to see the guys that they’ve got coming back, it’s scary. A tremendous linebacking corps, really, really strong secondary, and a team that held everybody to about 19 ½ points last year. The second thing they’ve got is a tremendous running game, and we all know about the two with Bogan and Franklin, but then to have Bellamy back also, coming off an ACL, and what he can bring to the table, they’ve really got a three-headed monster working right now. And then the last, they play great special teams with Darius Phillips, you know, the MAC special teams player of the year. A guy that can not only hurt you on punt returns, but kickoff returns. They have everything you need to go on an away game – pack your run game, pack your defense and pack your special teams. This is a very dangerous team, and we’ll have to be able to play our best to compete with them.”

“It’s also going to be a lot of fun for me, because it’s really a reality check for us to see where we are, and to see where 24 newcomers are, and to see some guys that we redshirted and see how they’ve developed. Everybody has great, high expectations for us. It’s neat to see as a coach exactly where you are after this first game, so I’m really excited about that. How are the kids that we redshirted last year and spent a year developing, where are they at now? That’s the most exciting part for me. That’s kind of the unknown. I kind of know a Cam Smith, and an Uchenna [Nwosu] and a Porter [Gustin] – you’ve seen those guys play so much football, you know what you’re getting. But I’m really excited to see the young people and how they can help this football team.”

Western Michigan runs an up-tempo offense. Do you think they will try to run with you guys?

That’s one of the things that we’ve noticed on tape is that they do use tempo and they can go fast, whether it’s one-word call or whether they run the same play twice, what we’d call a mulligan, you know, they run the same play as fast as they can. And tempo is part of our league, and it’s something we’re used to, thank goodness. About half the teams in our league are no-huddle, tempo teams, so we always are prepared for it. It helps us being a no-huddle. Probably not as fast as Indiana was last year, but our defense sees it on a daily basis, so I think that gives us a little bit of a leg up. They won’t be surprised.

How much of your rotation at receiver is predetermined?

A lot of it is they control themselves based on in a no-huddle offense you’re always keeping an eye on your teammate, so they have a buddy, they watch their buddy, if he raises his hand they go, and we don’t even substitute. Now there are particular situations and plays that Tee may call a certain individual into the game, and we’re able to communicate that substitution by personnel grouping along with that player’s number, to be able to get him in the game for a certain situation. So, you have it two-fold. One, in no-huddle and going fast they handle it themselves, but in certain special whether it’s red zone, whether it’s down-and-distance, third-down situations, there are particular men that will go in with a particular skill-set to help us move the chains.