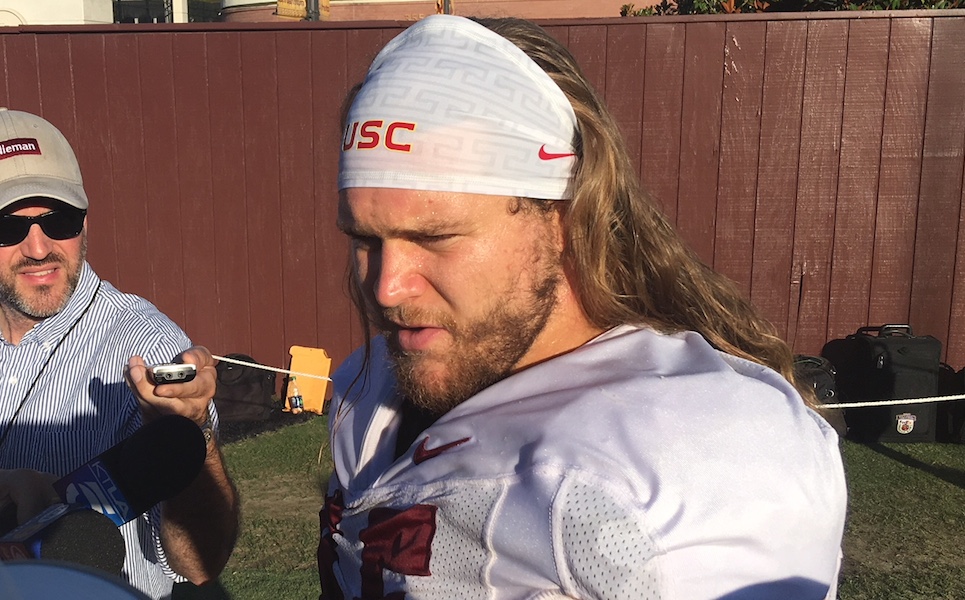 Gustin, who suffered a torn meniscus three weeks ago, said he was pretty happy about how his knee felt today after taking part in a contact practice on Tuesday.

“Tuesday was my biggest challenge and I was happy that I didn’t feel any pain or swelling this morning,” Gustin said. “That was a big obstacle to overcome and at this point I don’t feel limited in any way. I’ve been doing what they tell me to do, icing it several times a day, trusting the process. I wasn’t really worried about it being super, super bad because I didn’t feel a pop or tear when it happened, I just couldn’t put any weight on it. At this point I’ve been medically cleared so unless something really bad happens I’m planning on playing and being out there with my guys. It’s been too long.”

USC coach Clay Helton wouldn’t commit to Gustin being out there but said the chances were “pretty good to really good, unless some new swelling or pain pops up.”

It stands to reason that Gustin or no Gustin the Trojans should be able to handle the 30-point underdog Rebels but it would be nice to have one of their leading defenders when facing an offense where running the ball is the strength. Helton said the priorities when facing UNLV will be to contain the quarterback and stay in their lanes.

“I feel really confident in our defense right now,” Helton said. “The experience we have, these guys have played a lot of football and I think they will come out ready to go.”

* USC defensive coordinator Clancy Pendergast announced that Greg Johnson will get the start at cornerback ahead of Isaiah Langley, who had been working as the starter through spring ball and much of fall camp.

* Projected starting center Toa Lobendahn sat out practice for the second day in a row due to a strained pectoral muscle, with Brett Neilon taking the first team reps in his place. “We’ll see on Toa,” Helton said. “We’re taking it day-by-day, he has so much experience and doesn’t need a ton of reps to be ready. (Brett) Neilon is ready to play if called upon.”

* Freshman tailback Markese Stepp has been cleared to get off concussion protocol but will not play in the game.

* Helton detailed why Amon-Ra St. Brown was chosen for the punt return role; 1) He makes great decisions, 2) He has a maturity in the role, you can tell he’s done it before, 3) He’s a natural pass catcher, 4) He’s an explosive runner with the ball, one move and go, 5) The seriousness of his preparation.

* Helton was throwing in an early drill that saw defenders matched up against each other, including Cameron Smith and Gustin covering each other on routes.

* Former USC players John Mazur and Chris Hale were among those in attendance.

* Here were some of the highlights on an OL/DL one-on-one drill: Jay Tufele beat Alijah Vera-Tucker, Brett Neilon did a good job to stop Brandon Pili at the line, Malik Dorton got past Jacob Daniel with a quick move, Andrew Vorhees stonewalled Jacob Lichtenstein, Marlon Tuipulotu tossed aside Justin Dedich, Neilon stopped Pili again (those two are fun to watch go against each other), Jalen McKenzie had a good rep to stop Connor Murphy.

* The practice closed with a good 11-on-11 team drill that got started with a nice series led by JT Daniels. On the first rep it was actually Olaijah Griffin knocking away a deep attempt from JT to Tyler Vaughns. JT came back with a TD on a deep pass to Velus Jones, and then hit Tyler Petite with an over the shoulder ball. Aca’Cedric Ware had a carry into the 2nd level and Vavae Malepeai had a weaving run into the secondary. Daniels tried to hit Devon Williams deep but Langley knocked it away. With Jack Sears at QB we saw a designed run that Hunter Echols stopped at the line. Velus ran a fly sweep for a short gain. Raymond Scott had a tackle in the middle of the line on a short Vavae run. Matt Fink came in and threw a quick hitch to Stephen Carr, who got a block on the outside from Austin Jackson for a nice gain. Fink threw to Petite who collided with Talanoa Hufanga shortly after the ball arrived. Fink hit St. Brown for a nice gain and Pie Young had a carry on the final play.

“We’ve been hitting each other for 4 weeks, we’re ready to hit someone else” – Clay Helton