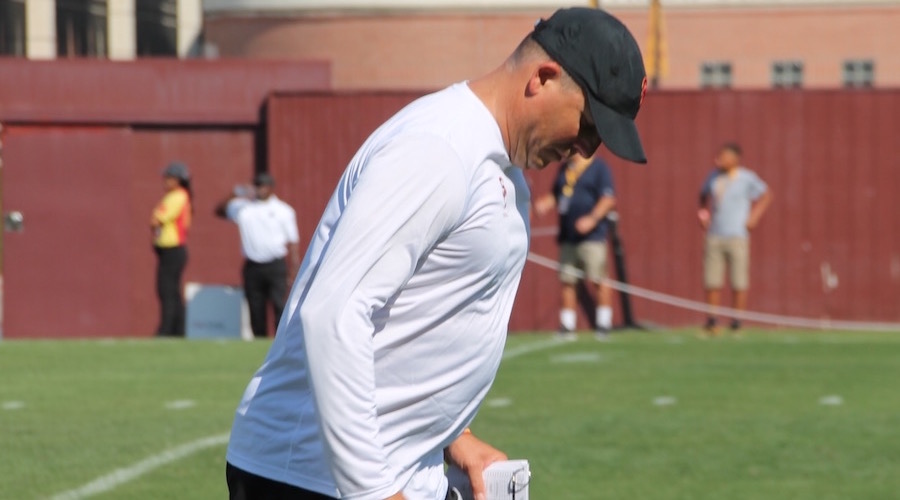 With fall camp in the books, the Trojans have firmly switched their focus to Western Michigan, the team that they’re set to face in their season-opener on Sept. 2. Dressed in full-pads, Clay Helton’s squad was all business as it went through a two-and-half-hour practice session that resembled a typical mid-season Tuesday practice.

“This will be a mock game week for us,” Helton said. “We’re acting like we’re preparing to play a game on Saturday. We’ve actually game-planned the last two days on things we’ll be doing in the game and working it today with our team. I’ve been very impressed with Western Michigan’s personnel in watching them from last year with the confidence they play with. It’s very hard to win 12 games in a row.”

The offense kicked off the session on the right foot, with Sam Darnold lofting up a long pass in the initial 11-on-11 team period, and Deontay Burnett making a beautiful diving grab in the corner of the end zone – with Jamel Cook in coverage. That wouldn’t be the last time that duo would connect as Darnold would connect twice more with Burnett for Long touchdown scores before the day was over. Darnold also hit Tyler Vaughns at one point for a long completion.

But not everything went Darnold’s way. Cornerback Jack Jones made the arguable play of the day during a 7-on-7 period as he deflected a Darnold pass intended for Jalen Greene into the air, before diving and snagging it back for an interception.

The best news of all to come out of the practice might have been the return to action of a number of injured players. Josh Falo (knee), Daniel Imatorbhebhe (hip), Velus Jones (foot), Cole Smith (knee) and Andrew Vorhees (back) all took part in practice, although Imatorbhebhe was still limited.

On the negative side of things, starting right guard Viane Talamaivao went out with a foot injury, but according to Helton, he is expected to be back in the lineup soon.

“Viane had an outside foot injury,” Helton said. “They X-ray’d it just for precaution, it came back negative, I expect him back out here in a couple days.”

Jordan Austin filled in for Talamaivao with the No. 1 group when he went to the sideline.

On a more somber note, Helton revealed that freshmen Isaiah Pola-Mao and Hunter Echols will miss extensive time with injuries of their own.

“On the other end, Isaiah Pola-Mao from the scrimmage the other day had a shoulder that was going in and out on him, subluxing, we’re going to go ahead and fix that shoulder and it will be a season-ending injury,” Helton said. “Hunter Echols had a successful hip surgery to take care of an internal infection, but it’s going to take several weeks to get him back so we’ll see where we’re when he comes back, it could be a 6-8 week timeframe to make sure he’s ok.”

Helton noted that he will release the first depth chart of the season this coming Sunday.

Helton on the captains

On Monday USC announced that the team had elected four team captains for the 2017 season. They include quarterback Sam Darnold, linebackers Cameron Smith and Uchenna Nwosu, and safety Chris Hawkins.

The fact that there are three defensive captains and just one offensive captains is somewhat unusual, but Helton said that is how the players voted, and that each player elected is more than deserving of the honor.

“We asked them to vote for two offensive and two defensive, but it was amazing the votes that came in for those names were so much larger than everybody else,” Helton said. “It speaks volumes for what they’ve done in the off-season and for this football team. Chris has been so unselfish and I don’t know of anybody who has worked harder. I think of how far Uchenna has come from a freshman to kind of being the rock of our defense. Obviously Cam Smith for three years here, the way he’s played and the way he’s conducted himself, it speaks volumes. With Sam, it’s his poise, his demeanor, how he handles himself day in and day out. All four of them are just so consistent.”

Helton on Ronald Jones II, who is coming off a strong scrimmage performance on Saturday

“RoJo looks like about the best shape I’ve seen him, and the runs we saw on Saturday were powerful,” Helton said. “Arm tackles aren’t going to bring him down this year. He’s right where he needs to be.”