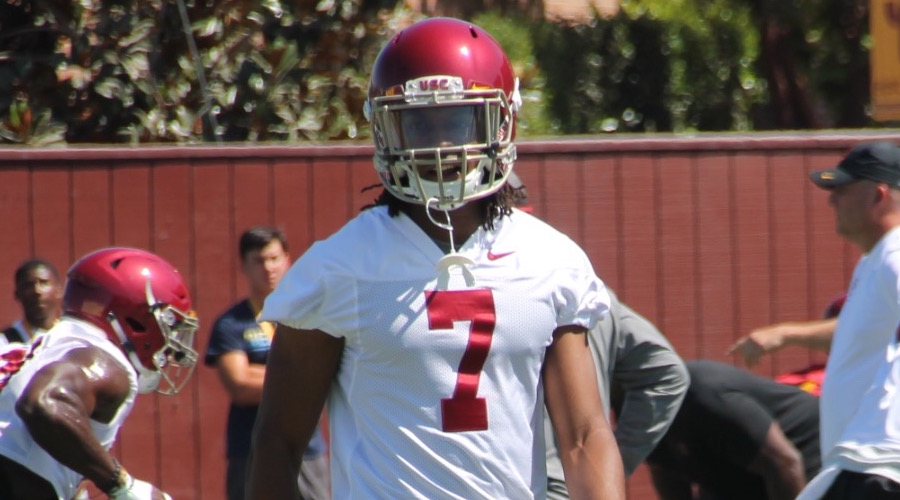 For a USC team coming off an uneventful scrimmage the Tuesday practice was a terrific response to the season getting closer as it was a high energy physical session that featured the return of several banged up or injured players.

We had Cameron Smith back at inside linebacker, Daniel Imatorbhebhe got extended reps during the early part of the day, four of the five projected o-line starters were out there (only Chuma Edoga was missing) and versatile DB Ykili Ross also was back in action.

The tone of the day got set early during a drill on Brian Kennedy Field when Devon Williams caught a pass over the middle and was promptly dropped by a shoulder from Marvell Tell. Tell gave the freshman a pat on the helmet as he got up right away. Other plays from the drill included Olaijah Griffin causing a fumble after an Aca’Cedric Ware run, Reuben Peters tripping up Vavae Malepeai, Connor Murphy with a tackle on Ware at the line, Bubba Bolden trying to strip Williams after a short pass from JT Daniels, Vavae lowering his shoulder on a Peters tackle attempt and Matt Fink going under center on a short yardage play before giving the ball to Velus Jones who was tracked down by CJ Pollard. There were also errant snaps from Toa Lobendahn and Justin Dedich.

“We worked a lot on first down and second down plays for our UNLV game plan,” USC coach Clay Helton said. “I also talked to the players about communication and substitutions. Things can get a little hectic when there are 80-90,000 people around and I want to make sure we’re game ready.”

In a later drill on Howard Jones Field we saw Amon-Ra St. Brown do a nice job on a comeback route to keep coming back to his quarterback and keeping his body between the ball and the defender. We also saw Devon Williams take another pop, this one from Isaiah Pola-Mao. JT Daniels was intercepted by Jonathan Lockett, who went up high to make the grab. Two plays later JT rolled right and was baited by Olaijah Griffin, who made the pick and had a nice return. It was the first time this fall camp that Daniels had been intercepted twice in one day. QB coach Bryan Ellis said both throws were the right read but they were late, and he also credited Griffin with a good job of baiting him. JT, to his credit, came right back with a touchdown to Williams, who lost Griffin on a slant and was wide open for the score. On the next play JT went for another score with a deep throw to Velus but the ball was barely overthrown. Jack Sears came in and threw a screen to Vavae with Alijah Vera-Tucker out front. Sears then threw a screen to the left to Carr for a nice gain. Sears threw another screen to Vavae. Fink came in and threw a screen to Carr, who weaved and went for the end zone, there was no call to stop the play and Stephen apparently scored. Helton has talked often about how all the backs can catch the ball and this session showed how effective throwing the ball to the backs can be.

Mock game: The Trojans will hold a mock game Saturday with conditions as “game-like” as possible, including coaches on headsets, situational work, and “putting the ball down and letting them play”. According to Helton there are several position battles still in play and he will sit down on Sunday and make some decisions. One of those battles is obviously at QB and Helton anticipates making an announcement early next week after meeting with each player and their parents to discuss the decision.

“I’m a USC Trojan for life, no doubt about it” – Matt Fink, when asked about the possibility of a quarterback transferring if they don’t win the job

QB coach Bryan Ellis talked about each of his quarterbacks after practice:

Fink “He’s the furthest along running-wise and understanding the run game. He needs to improve understanding protections, what his hot read is.”

Sears “Needs a better understanding of the whole offense and pass protections. He’s got a good arm and that allows him to get away with a lot”

Daniels “He just needs more reps. For someone who is supposed to be a HS senior, where he’s at is phenomenal. With more reps he will just get better and better”