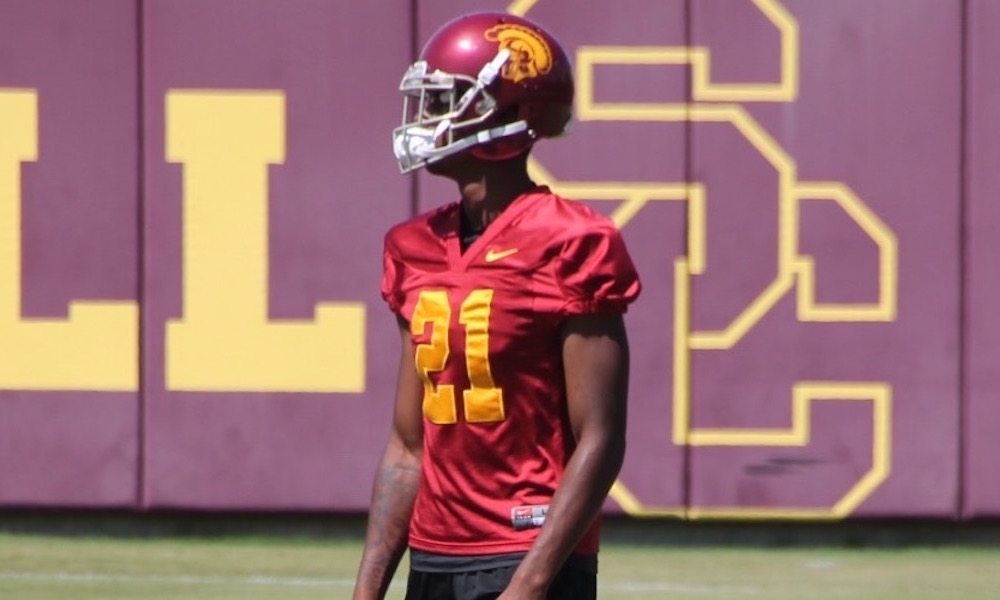 The Trojans were once again in shorts and shells, with the situational emphasis today being placed on sudden change, where a turnover occurs and the offense has a change to take advantage with a touchdown while the defense needs to get a stop.

“I told the story to our team that really hits home one of the areas that maybe turned our season around last year,” USC head coach Clay Helton said. “Our game against Arizona State, having a turnover early in that game, which was a sudden change down on our end, and the defense not only holding Arizona State, but really forcing a missed field goal also, and from that just the momentum carried in that game. So, very important situation for us, got good work, I thought the defense did a really nice job with it today, especially with some pressures that they brought.”

Among the defensive highlights were some good plays from the secondary. Iman Marshall stood out today with three pass break-ups in the end zone where he was all over the receiver every time to bat the ball away. Jackie Jones showed good patience when he was in good position against Erik Krommenhoek near the goal line and waited for the ball to knock it away at the right moment. C.J. Pollard added a pass break-up, Bubba Bolden ran stride for stride with Joseph Lewis before tipping a ball away, and Isaiah Pola-Mao added an interception off Jack Sears that he returned for a touchdown. Yoofi Quansah broke up a pass for Randal Grimes. There was also a sack from Levi Jones.

Offensively, there were two plays that stood out. The first came from Velus Jones, who made a one-handed grab downfield with Cameron Smith taking away his right arm, and then Lewis caught a slant from Sears and pulled away from Bolden to go for the score. Sam Darnold hit Velus for another touchdown later in the day, and he also added a short TD to Lewis. Steven Mitchell made a catch while twisting his body to the left, and Sears hit Randal Grimes for a touchdown after corner Dominic Davis (in his first day on defense) went for the pick and missed. With a crowded tailback rotation it’s not a huge surprise to see Davis getting a look at corner (he played some in high school) but it’s too early to know how the position switch will work. Also, Stephen Carr ran a pitch play which looked a lot like Student Body, it was nice to see.

There was a brief scuffle between Oluwole Betiku and Austin Jackson with the other players quickly getting in and breaking it up. Helton said it was a case of two guys going at it, something that happens in camp, and he said he wouldn’t be giving any discipline as he liked the way the other players handled it.

“You know, after 10 practices it’s hot out here, we’ve been going against each other for two weeks now, you anticipate those,” Helton said. “They happen in every camp, and you kind of get a feel for where everybody else is at, and you saw everybody else separate them real fast and then look at me like, ‘oh God coach, what are we going to do? Are we up-downing or not?’ But since it didn’t become a team thing, it became hey, ‘pull them off.’ It’s two men that are aggravated at each other. It happens in camp. The team understood. They took care of it immediately. I’m not going to punish them for that. Now, if gets a little more team aspect, then obviously you drop the hammer and you end it right there.”

It was not a great day in the ongoing placekicking battle as both kicking candidates went 2-6, although Chase McGrath did make a 50-yarder. Jake Olson once again handled snapping duties with Damon Johnson out with a boot on his foot, and there were a couple off-snaps during the drill that impacted the kicks.

Helton reported no new injuries today, while Jackie Jones (shoulder/arm) and Tyler Petite (concussion protocol) were both back in action.

The Trojans will hold a light workout on Friday, basically a walk-through, and return on Saturday for a scrimmage on Brian Kennedy-Howard Jones Field.

“The first week the defense got us but now it kind of flipped and we started scoring some touchdowns. It pissed me off early to throw those picks, I’m trying not to do that from now on.” – Sam Darnold

How do you think the offensive line has developed working together as a unit?

“It’s really been good to have Nico [Falah], Toa [Lobendahn] and Viane [Talamaivao] back. Just everything works smoother when they’re in there, and that comes from game experience and game reps. You’re talking about guys that have played for three years straight and really helped this football team. So, when they’re in there the communication is great, and they’re really doing a nice job. It feels so much different than spring when they were no there. Just from a leadership standpoint and communication standpoint, and obviously the experience that they have to get the job done.”

What’s it like having a quarterback who says that one of the things that he does is to test the wide receivers in terms of where he throws the ball sometimes?

“I think any good quarterback gets a feel for exactly what his wide outs can do, and where their catch radius is. If you get that chemistry with a Darreus Rogers, how big is that catch radius for Darreus Rogers? Well, it’s all over the place. And you have to be able to figure that out with each and every kid, and I think that’s the mark of a good quarterback. And Sam is about as intelligent as they come, so that’s part of having 29 practices, is really figuring out the chemistry of each kid – what he’s good at, what you’re comfortable to be able to pull the trigger with him, and where is his catch radius at. Is he great high-ball kid? Is he a kid that body-catches? He’s getting a good feel for those kids right now.”

Helton on Darnold’s progression as a running quarterback, and the fact that he is recongzing that when the defense is in zone, they’re looking at him, and when they’re in man, they’re not looking at him as much:

“He’s really diagnosing. We call it zone eyes, you know, when a DB, you look out there, and he’s in press coverage- if he’s got his eyes on you he’s getting ready to bail. And when he’s got his eyes on the DB, he’s getting ready to play man coverage, which means, ‘you know what, he’s not looking at me.’ And that’s one of your opportunities when recognizing man, especially with how many times we get five men out, there’s a lot of guys running routes, and a lot of ‘backers are vacated in space, and you’re able to make yards that way if you recognize that. And I think that’s the mark of really good quarterbacks. I watched a little bit of Carolina and Houston last night, you saw Joe Webb and you saw Deshaun Watson do that. Every time that it looked like man, they were like, ‘alright, I’m going to go get 10 to 15 and get down and move the chains.’ So, it’s part of being a good running quarterback and it’s part of his progression.”