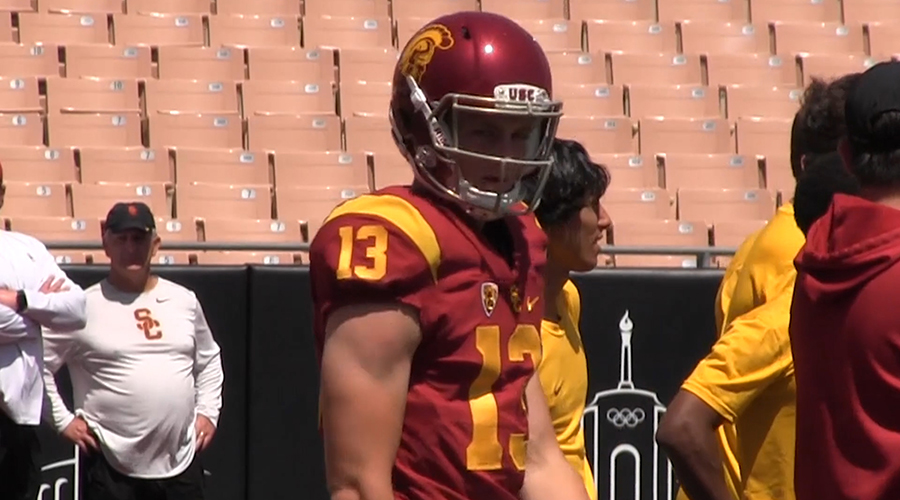 There are two big injuries to the signal-callers on each side of the ball for the Trojans with Cameron Smith having missed the last two games with a hamstring, and J.T. Daniels suffering a concussion during the Utah game and going through the concussion protocol this week.

Smith was held out of any contact drills again today and spent his day running on the sideline under the watchful eye of trainers, and once again it was Palaie Gaoteote taking over while Smith is sidelined.

As for the quarterback spot, Daniels has passed the tests presented to him so far as far as the protocol but it’s also a fluid test so we don’t know when it will end or when it will be cleared.

“It’s no guessing game with these tests, we have good doctors and when they say J.T. will be ready to go he will be ready to go,” USC head coach Clay Helton said . “I’ve talked to Jack Sears and told him you always have to prepare as if you were a starter, well, here you go. And all the plays were working with Jack on, J.T. already knows, it’s part of the game.

“Jack has great athleticism, he can create some QB-driven runs, we’re not going to re-create the wheel for a QB making his first start.”

“Don’t be fooled by their record. On offense we’ve known Manny for a long time, he’s got a real arm talent and escapability. Hopefully we can get him off his spot. Their running back has a physical base and can make the first guy miss. And N’Keal Harry is one of the best in the country, he’s a grown man. On defense, they have a pressure bunch with a bunch of disguises. Jalen Henry we used to know him as a wide receiver but now he’s a safety. And Merlin Robertson is a local kid that we know well and he’s doing a great job setting that edge.”