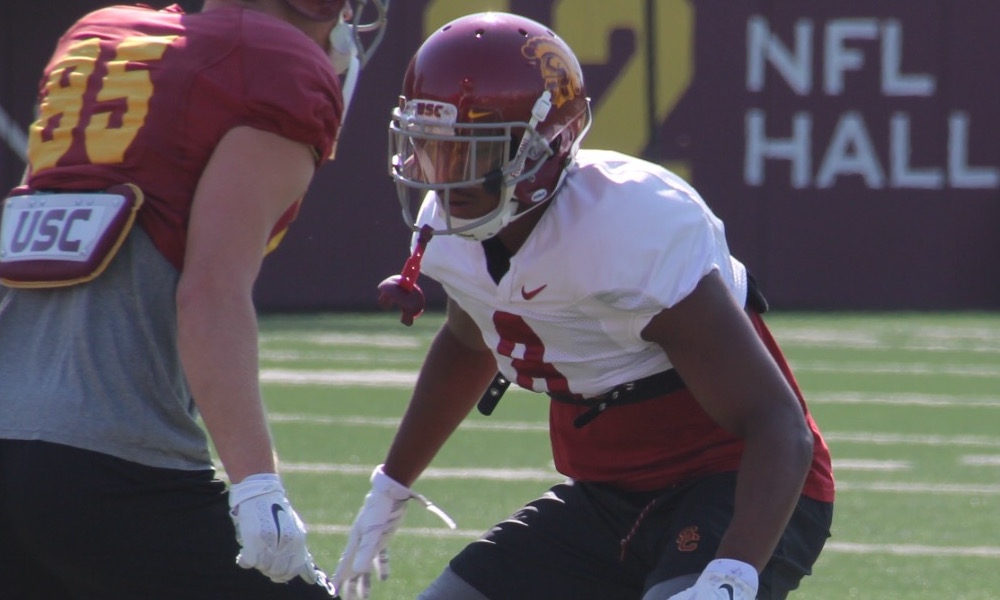 It’s officially Colorado week, so the Trojans were back on Brian Kennedy-Howard Jones Field on Tuesday preparing for the crucial contest that would put Clay Helton’s squad in the Pac-12 championship game with a victory.

With the team dressed in shorts, shoulder pads, and helmets, the two-hour session featured the return of some notable players from injury, including cornerback Iman Marshall (knee) and tailback Vavae Malepeai (knee), both of whom took part in a good portion of practice in a limited capacity after sitting out this past weekend’s win over Arizona.

Also suiting up and taking part in practice after missing time recently were outside linebacker Juliano Falaniko (thigh) and tight end Josh Falo (foot), although Falaniko did leave the session early.

Rasheem Green (shoulder) got limited work in before getting the latter portion of the session off, while the list of those who did not participate in practice included Porter Gustin (toe),Toa Lobendahn (knee), Chase McGrath (groin), Connor Murphy (hip), Uchenna Nwosu (ankle) and Tyler Petite (shoulder).

Helton said that Lobendahn, McGrath, Murphy and Nwosu are all day-to-day, while Gustin is doubtful.

With Gustin, Murphy and Nwosu all sidelined, Iosefa remained the starter at the predator outside linebacker position, while Oluwole Betiku spent the entire session with the No. 1 defense at the SAM spot.

Freshman Austin Jackson ran with the No. 1 offense at left tackle in place of Lobendahn.

Helton also added that McGrath will be rested this entire week, but that he will kick PAT’s and field goals against Colorado, while Reid Budrovich will handle kickoff duties, just as he did in the fourth quarter against Arizona.

“He gave us a great effort on Saturday,” Helton said of Budrovich. “[McGrath] feels good kicking field goals. It’s a little bit more stress when you’re having to do kickoffs, so Reid will kick off for us. Obviously, we saw the other night he’s very capable of doing it. I thought his placement, which he’s been working on a lot, was key in that. [McGrath] is in a position to be able to kick extra points and field goals for us this week, but we do want to rest him this week.”

Helton also noted that Christian Rector (hand) has started to do some conditioning work and movement drills.

In terms of highlights, Sam Darnold connected with Steven Mitchell for a 45-yard touchdown in an early 7-on-7 period. Just a few plays later, however, he was nearly picked off by Ykili Ross on another deep throw to Mitchell. Ross made a nice play for the ball, but dropped it.

Freshman safety Bubba Bolden came up with the hit of the day in the final 11-on-11 period of the session, dropping tailback Ben Easington on a quick run outside. Darnold finished his day with a long touchdown pass to Michael Pittman Jr., and two more to Deontay Burnett.

The offense has struggled in fourth-down conversions as well as in the red zone. What has been going on there?

“You’re looking at an offense right now that’s averaging 492 yards a game, which is the highest since 2005, and there are always categories that you want to improve. One of the things that comes in with fourth-down is how many times are you going for fourth down, and what’s the yardage. I’ve been a little bit over-aggressive this year on some fourth-and-long situations, and when you’re in those situations, obviously your percentages are not going to be as good. Red Zone, I wish we were a little bit better. I think we’ve had some turnovers in those situations. Thank goodness for a good field goal kicker that has been putting points on the board for us. But we look at how many points we’re putting up, especially in the last couple games with over 40 points a game, I think we’re averaging right at 36 points a game right now, so we’re putting points on the board. There’s a lot of great things that are going on offensively. You always want to try to improve in each and every area. Red Zone efficiency is a big part of it.”

USC jumped from No. 17 to No. 11 in the College Football Playoff Rankings. Are you surprised by that?

“We’re just focused on the next game to be honest with you. I’ve always said add them all up at the end and see where you’re at. This team has always been about preparation, treating each game like a playoff game. And we’ve got a chance to win the Pac-12 South title, so that’s our only focus. It’s still so early. We’re in November, and there’s so many games still to be played, and decisions to be made. It’s nice to be thought of that way. And we still have the opportunity to not only play Colorado, but have another game next week, and hopefully, if we do our job, have another one after that in the Pac-12 championship game. Right now, it’s nice to move up, but we’re focused on Colorado, and what that means to our team.”

Have you heard anything from up in Washington about Liam Jimmons?

“No, I haven’t heard anything.”