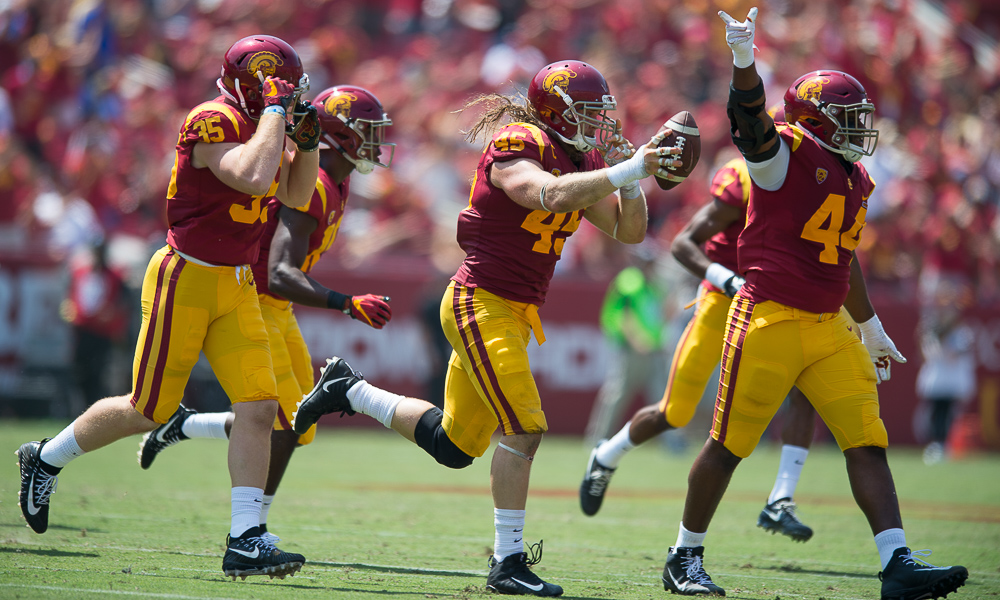 The bye week practices continued for the Trojans on Wednesday with a lot of work on the pass rush. Clay Helton talked about the need to develop additional pass rushers to supplement Porter Gustin, who is leading the conference in sacks.

“One guy who really jumped out is Brandon Pili,” Helton said. “He has some really unique pass rush ability as a big man and I thought he did a real nice job. Another guy who is slippery is all get out is Hunter Echols. He got into the backfield a couple times last week

* During an early one-on-one drill with WR’s vs DB’s we saw multiple good plays from Iman Marshall, including two pass break-ups in reps against Michael Pittman. We also saw Devon Williams beat Greg Johnson on a pair of reps.

* During the first 11-on-11 team drill there was a low snap on the first play for the first offense. Olaijah Griffin stripped Tyler Vaughns of the ball after a catch. Palaie Gaoteote made a nice pass break-up downfield of a ball intended for Josh Falo. Vavae Malepeai took a run and got to the 2nd level, and then proceeded to run out the remaining 60 yards to the end zone. Matt Fink hit Josh Imatorbhebhe with a deep TD pass. Devon Williams caught a slant and the DB tried to rip it out but Devon did a nice job to hang on.

* There will be no practice on Thursday but there will be an extra strength and conditioning session for the team, along with an afternoon meeting with their coordinators.

* Levi Jones is one of several players who missed practice due to an illness that is going through the team, but Helton praised him for the way he prepared like a starter and it showed last week against Arizona when he had to play the whole second half, and responded with a pair of tackles for loss.

* Among those in attendance were former TE Dale Thompson (now a scout with Tennessee Titans) and former LB Thomas Williams (on campus to lead a class for student-athletes).

* Helton was asked about Bubba Bolden and he said there is no update.

* Helton praised the work of Markese Stepp from the Tuesday practice. The 230-pound true freshman is likely headed for a redshirt year but did a good job yesterday in the team run emphasis period.

* Josh Imatorbhebhe is getting closer to being ready to play. His straight line running ability is good, there is no pain, and now it’s a matter of being able to make cuts, to have the confidence in the ankle.

* Helton talked about the importance of self-scouting during the bye week, to “break us down like an opponent would break us down”. We get a chance to catch our breath and see our tendencies, if a play has worked again and again, well, they see that too. We can say “we’ve run this over and over and it’s only been out of this formation”, this can give us a chance to run it out of another formation, or add a motion to kind of hide it, that’s a good thing. It’s a good opportunity for us to self-scout ourselves.