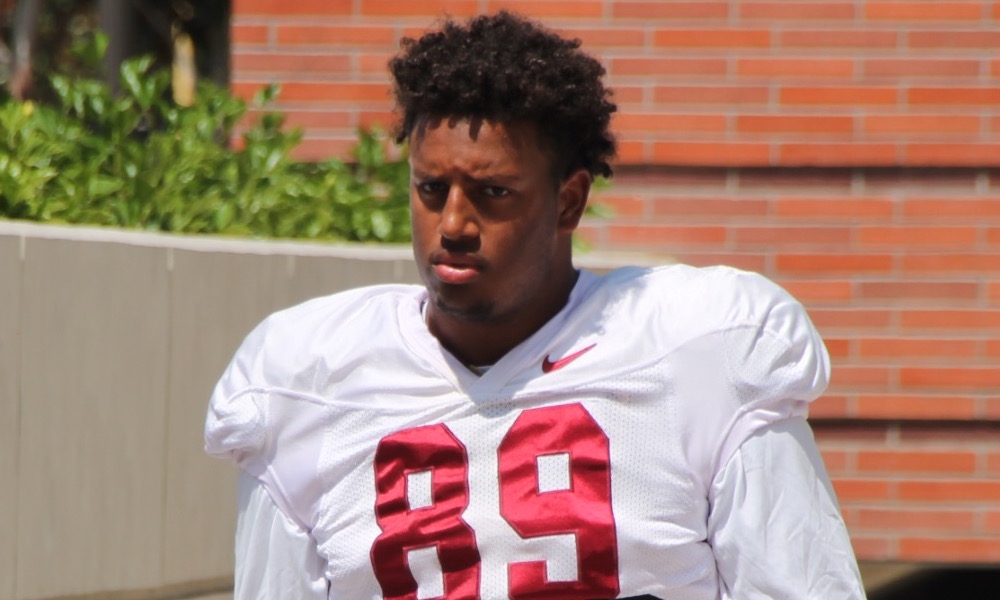 The Trojans were back in action for a full pads practice on Tuesday as they begin to figure out how they will replace Porter Gustin moving forward.

There are several options to look at, and the first one today involved taking a look at Christian Rector in the role. Rector saw a lot of success last year when Gustin was out, and it was really his play on the outside which helped him earn 2nd team All-Conference honors. The first drill we saw today featured a starting line of Mauga, Tufele, Tuipulotu, Dorton and Rector. We will also see Hunter Echols (who the coaches have praised for his pass rush abilities) as well as Connor Murphy.

One person who it doesn’t sound like will get a look is Palaie Gaoteote, as Clay Helton said he has a lot on his plate learning the mike linebacker role, in addition to currently being in concussion protocol.

“EA is our back-up Mike and he would need to learn a whole new position,” Helton said. “He hasn’t been cleared yet by the doctors but he said he was feeling good, and he did some non-contact work today.”

As for the Mike spot, we saw Cameron Smith in full pads and doing a lot of work on the side with the trainers, but no determination has been made on if he will play.

“Cameron ran today and yesterday,” Helton said. “He’s feeling a whole lot better than last week and he wanted to be out there for the last game.”

Gustin did have the surgery on his ankle today and it was called successful by the doctors.

“They inserted a plate and a screw, and he should be able to return around mid-February,” Helton said. “You can’t replace a guy like Porter. In my time as a coach I can probably count 5 guys who have brought it the way he did, the total package. I look forward to getting him back out here with his brothers as Coach Gustin.”

“This is a great challenge this week because I think Utah is playing as well as anybody in the conference. The key for them on offense is establishing the run game, both with Moss and Huntley. And they like to get the ball to 18 in a lot of different ways. On defense, they have their usual big DL to take up space and funnel things to a pair of really good linebackers. I also think this game offers a look at two of the better safeties in the country.”

Helton talking about identity of offense, is he worried about becoming Deep Ball U?

“I thought this game was a great example of Tee taking what the defense gave us. I’m a run guy by nature as the son of an o-line coach”

Give us your thoughts on your performance last week

Do you feel like you’re throwing deep too much?

“No, we have the receivers for it”

Do you feel like you’re throwing off your back foot too much?

What happened in the third quarter, what changed to slow the offense?

“Nothing changed, we missed a couple plays and we didn’t have the ball a lot”

What happened on the first throw of the game, the interception?