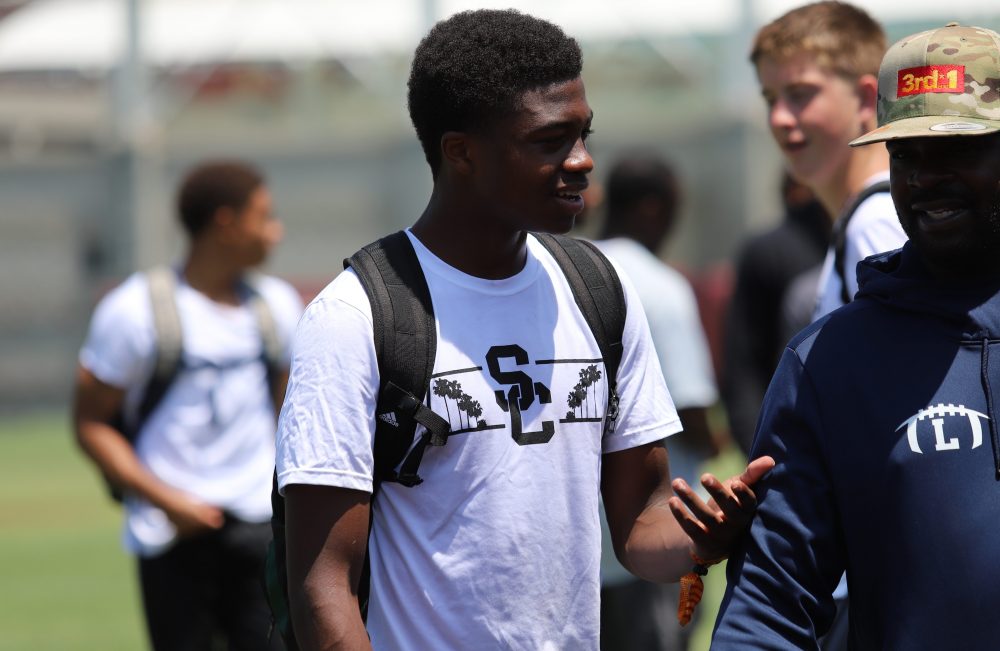 There are a handful of Southern California prospects that will serve as a litmus test for this new defensive staff and the new recruiting approach by the USC program. One of them is Loyola High School cornerback Ceyair Wright.

USC didn’t sign a cornerback in the 2020 recruiting class, despite three of the top five corners in the nation residing in Southern California or Arizona. In the 2021 class, the 6-foot-1, 175-pound Wright is the No. 70 overall prospect, the top-ranked cornerback west of Missouri, and California’s No. 8 recruit.

If USC is going live up to its “Take Back the West” slogan, Wright is toward the top of the list of must-get prospects in this class. He’s become a big-time target for USC cornerbacks coach Donte Williams–and Williams has a reputation for not missing on many of those.

“Recently our relationship has been getting a lot stronger,” Wright said of Williams. “He’s really cool. I think the main thing about him is he can relate to his players and the people he’s recruiting.”

Wright said Williams’ youth plays a part in that and Wright feels that Williams truly understands what high school players are going through as they navigate the recruiting process.

But USC is just one school in the mix for Wright, who would like to take multiple visits when the NCAA-mandated dead period is over–though that is now extended through the end of July, which will make visits more difficult for everybody. Wright said he’d like to see the Texas schools–Baylor, Texas and Texas Tech have all offered–as well as Florida State and Arizona State.

“LA’s always going to be home for me,” Wright said. “But I still want to have the ability to branch out and look into everything, not just where I’m from. I don’t want to sell myself short.”

Wright hasn’t officially announced a top list, but Arizona State, Oregon and USC will likely be three of the Pac-12 programs in the race for him. At this point, he’s in no rush to make a decision, as he would ultimately like to announce his commitment at the Under Armour All-America Game.

USC coaches have been pitching recruits on the well-rounded experience at USC, with consistent mention of athletics, academics and social benefits. Wright echoed some of those thoughts when speaking about what will put his ultimate destination over the top.

“I think the main thing is a school that’s going to give me the best of both worlds,” Wright said. “Obviously I want to be on a winning team and a team that will develop me–but also a school that will put me in a position to be successful after football.”

Wright plans to major in business, but he might wind up more visible to fans of his chosen program in two other endeavors, as Wright looks to have a long football career ahead of him, and has also taken the next step in a blossoming acting career. After doing some modeling and commercial work when he was younger, Wright landed his first big part last year, when he got the role playing LeBron James’ son in Space Jam: A New Legacy.

Wright is passionate about acting and said taking part in that movie was a “really great experience.”

The movie is set to be released July 16, 2021, meaning fans will be able to see Wright’s basketball skills on the big screen before they see him on the football field. It likely wasn’t difficult for Wright to sharpen up his basketball ability, as he is a three-sport athlete–football, track and baseball–and has the athletic ability to succeed in just about anything he’d want to try.

And when it comes to acting, USC will almost certainly use its proximity and connection to Hollywood and the movie industry in its pursuit of Wright.

“That was the first big-time role for me,” Wright said, adding that working with James was an added bonus. “I had met him before we started filming. He’s a great guy, really cool and down to Earth. It was really cool to be around him.”

USC will have a couple of extra recruiters when it comes to Wright, as he is close with Trojan commits Anthony Beavers and Calen Bullock–as well as a number of other prospects in the 2021 class. This is a recruiting class that has really taken to celebrating all offers and commitments no matter who is making them and to what school they are headed.

“It’s a cool thing that a lot of people I know are getting recruited now and committing to schools,” Wright said. “I played with them in youth football and have known them for years now. It’s really cool to see everybody doing well.”

As for what might come of those potential visits or the fall football season, Wright said he’s taking a “whatever happens, happens” approach at this point.

“I can’t control it,” Wright said of what a potential season may or may not look like. “I feel like stressing over it will be detrimental to me.”