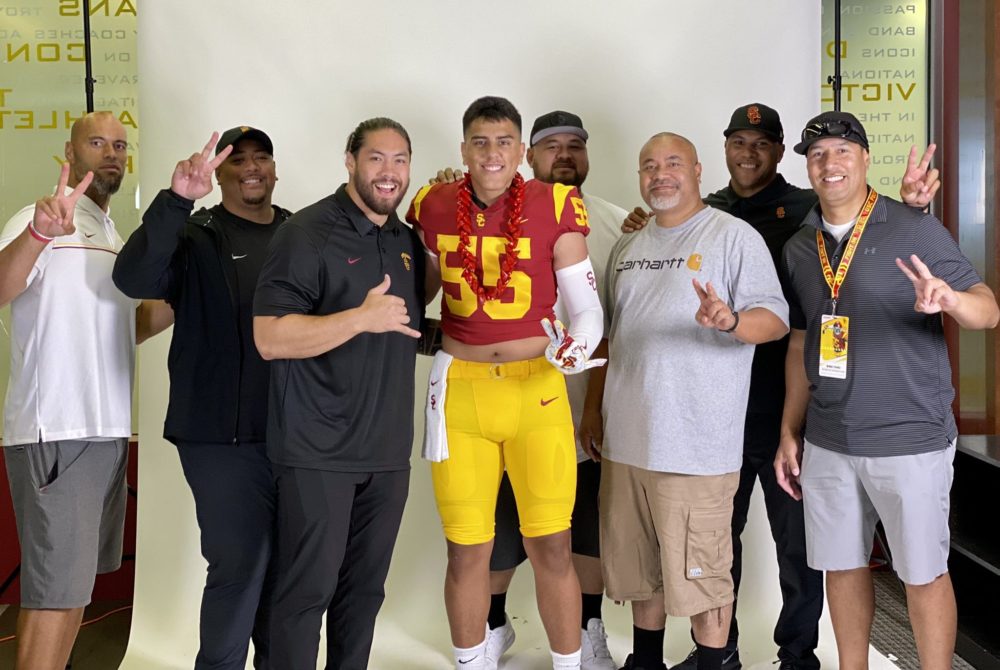 Of the top 16 offensive tackles in the 2023 recruiting class, Spencer Fano (Provo, Utah./Timpview) is the only one who plays high school football west of Texas. He’s the nation’s No. 45 overall prospect and No. 4 offensive tackle. That makes him a priority target for every program in the region and that’s especially true for USC, which needs to land some big-time targets in the upcoming recruiting classes.

Fano was on the USC campus this past Thursday and the Trojan coaches were finally able to make an in-person impression after sporadic recruiting due to the prolonged dead period and NCAA rules limiting how much contact coaches can have with recruits in the 2023 class and beyond. But with Fano on campus, USC coaches were able to show exactly how much of a priority the 6-foot-5, 250-pound tackle is for them.

Fano made the trip along with his father, Bingham Fano, and both were impressed by the experience.

“It was incredible,” the elder Fano said, adding that quality control analysts Lenny Vandermade and C.J. Ah You led the way as guides during the visit.

Defensive line coach Vic So’oto will likely be vital in this recruitment as well.

“He’s pretty much family,” Bingham Fano said of So’oto. “We’ve known Vic for years. When coach Helton offered Spencer in February, we made a point that we wanted to take an unofficial and check out the campus and meet the coaches.”

Fano was able to see the in-state schools earlier this month, with visits to BYU, Utah and Utah State. His older brother, Logan Fano, signed with BYU in the 2021 class and he has two uncles who played at BYU as well.

But it’s safe to say the USC visit made an impact and the Trojans will be in the running for Fano moving forward, even though he could take the process fairly slowly.

“It was nuts,” Spencer Fano said of the trip. “It was a whole different world.”

“I think for Spencer and myself, it was kind of a surreal visit,” Bingham Fano said. “I think primarily because of the history and the tradition. We’d never been to campus and never seen the facilities, so it was really surreal to be able to get out there and see the facilities and meet the coaches first hand.”

Fano said a highlight from the trip was his discussion with a variety of the USC coaches, including head coach Clay Helton.

“There’s a possibility that I don’t go there, but the coaches seem like they wanted me to develop skills for recruiting and even for football,” Fano said. “They were teaching me pass block stuff and coach Helton was telling me that wherever I go, make sure it’s perfect for me. That’s what stood out.”

As for what school is going to land Fano when it comes time to make that decision, the standout lineman said it comes down to three things for the most part.

What he can give a program is obviously at this point, and a major reason why he holds offers from Arizona State, BYU, Oregon, Penn State, Stanford, Tennessee, USC, Utah and plenty of other programs. He said coaches rave about his technique, particularly his kick step and his ability to stay patient in his set.

Los Angeles can provide something of a culture shock for prospects visiting from out of state, but Fano said he has family in Long Beach and is familiar with the area.

“We were mostly just on campus, but I’ve already seen all of it (Los Angeles),” Fano said. “It’s cool. I like it a lot.”

Fano is planning to take an unofficial visit to Oregon soon, but there is no set schedule after that. He credits his high school coaches at Timpview for helping him handle the process during the extended dead period. He brings a fairly laid-back attitude to the process and the fact that he’s one of the nation’s most coveted offensive linemen for his class, adding that he’s “just going with the flow” during his recruiting process.

For USC, the hope is that process ultimately leads him into cardinal and gold as an important member of the 2023 recruiting class.