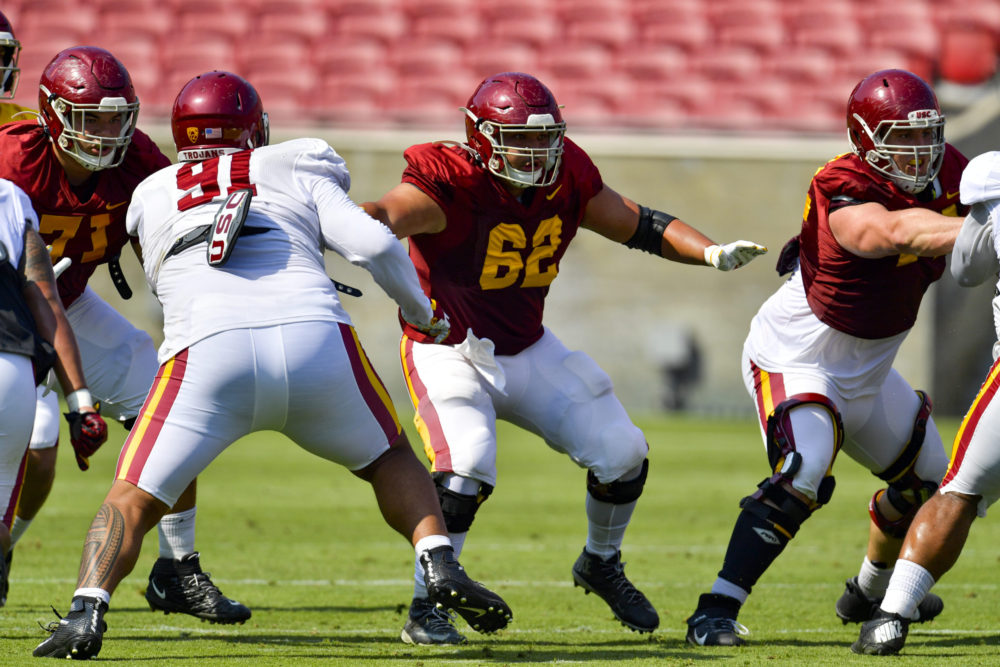 USC will likely be without starting center Brett Neilon and valuable reserve defensive lineman Brandon Pili when the Trojans take on the Arizona Wildcats this Saturday.

Thursday morning, USC head coach Clay Helton said it is “highly doubtful” that the Trojans will have Neilon available on Saturday. Helton said he doesn’t see Pili playing against Arizona.

Neilon sprained his ankle late in last week’s game against Arizona State. Helton said Neilon would test it a little bit on Thursday.

If Neilon can’t go, the Trojans will again turn to Justin Dedich, who also filled in at center last year when Neilon went down against Arizona State. Dedich finished the game at center for USC and was part of a push up front to get two big runs from Vavae Malepeai on USC’s final offensive drive of the game.

There is little concern about Dedich filling in for Neilon, as he has enough experience and talent to basically be considered a sixth starter for the USC offensive line. Helton said that offensive line coach Tim Drevno and offensive coordinator Graham Harrell made sure Dedich took some reps with the first-team offense during fall camp in order to prepare for this potential scenario.

But it does leave USC thin in terms of experienced backups along the line. Liam Douglass is now likely the first guy up at both guard positions and he’s also been taking reps at center, so he could fill in there if Dedich were to go down. Three true freshmen were listed on the initial two-deep, with Courtland Ford at left guard, Casey Collier at left tackle and Jonah Monheim at right tackle. Redshirt freshman Jason Rodriguez is also a potential option at both guard and tackle.

On the defensive line, the Trojans played without Pili against Arizona State, as the senior defensive tackle underwent surgery on a broken middle finger late last week. Defensive tackle Marlon Tuipulotu played arguably his best game as a Trojan, as he recorded a sack among his eight tackles. He was backed up by redshirt freshman Stanley Ta’ufo’ou and the Trojans should also have redshirt freshman De’jon Benton available, though he did not play against ASU.

Helton said he was pleased with the play of defensive linemen Nick Figueroa and Caleb Tremblay, who flanked Tuipulotu on Saturday. USC also has Drake Jackson, playing outside linebacker, as a de factor defensive end. The line will be tested maybe even more this weekend than it was last weekend due to the tempo Arizona’s offense will use and the way it will likely attack the perimeter through RPO plays. If the line has to be on the field for a large number of plays run at high speed while needing to pursue to the sideline consistently, USC’s depth there could be tested.