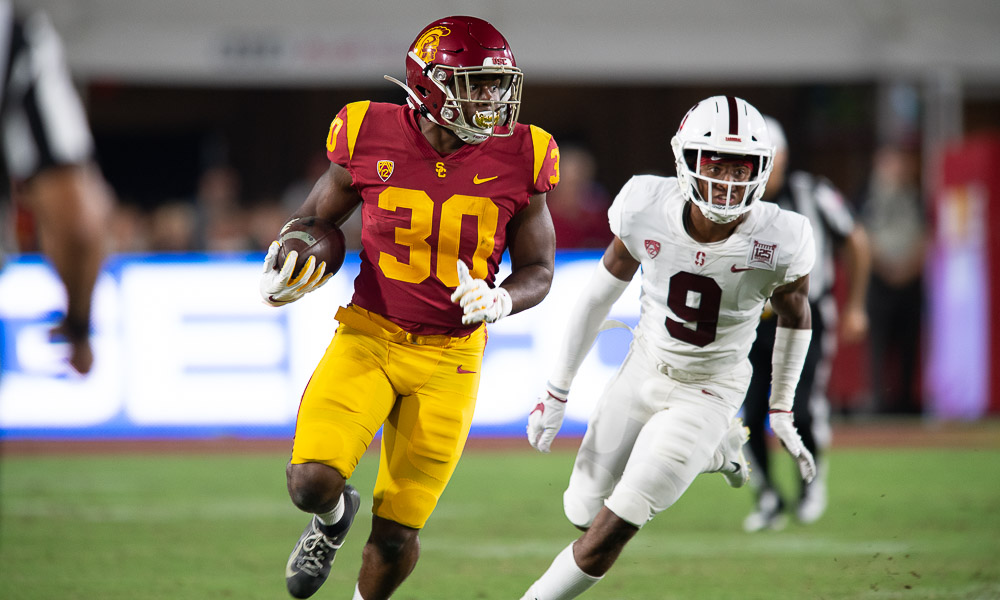 USC got a few players back on the field this week and the trend looks positive for several others according to head coach Clay Helton, as the Trojans hope to head into the 2020 season as healthy as possible.

USC’s fall camp started with a thud when it came to injuries, as Helton announced that the Trojans would be without linebackers Solomon Tulaiupupu and Jordan Iosefa for the season. The Trojans also were dealing with hamstring issues with a number of potential starters, including outside linebacker Drake Jackson, inside linebacker Kana’i Mauga and running back Vavae Malepeai. USC has spent various lengths of fall camp without running back Markese Stepp and true freshmen wide receivers Gary Bryant Jr. and Josh Jackson Jr., but all of them now sound like they could be ready for the start of the season.

Helton said Thursday morning that Drake Jackson, Josh Jackson and Mauga have returned to practice over the past few days. Drake Jackson and Mauga were dealing with hamstring injuries while Josh Jackson had an ankle issue. Stepp is back and getting some physical contact. Malepeai is doing individual drills and Bryant is now working his running program, able to do change of direction on grass.

Stepp is the big question remaining for the USC offense, as he’s back from the ankle injury that shortened his 2019 season, but suffered a mid-foot sprain early in fall camp.

“When you’re a 230 pound man that has to stick his foot in the ground and gets hit every time he touches the ball, we’re ultra-protective of him, especially coming off an injury,” Helton said. “It was a new injury, and a minor one, but he has looked phenomenal the last two days, and really is gaining confidence.”

Helton said “he looked like Markese” over the past two days.

With Stepp and Malepeai slowed, the Trojans have turned to Stephen Carr and Kenan Christon in the backfield this fall, and Stepp’s return could lead to bigger things for all three backs. Christon has been used some as a wide receiver and Helton said his speed makes him a threat anywhere on the field, but that he is a real weapon as a pass catcher. Carr also knows how much Stepp can loosen up a defense, and other backs are likely to benefit from that if USC does employ some two-back sets.

“We know how talented the kid is and everybody does,” Helton said of Stepp. “Even Stephen Carr came up to me yesterday and said, ‘Man, coach, I’m so happy he’s back,’ because everybody know what he provides for us…He’s a different back than the others.”

Helton said Stepp looks great, but his availability for the early part of the season will come down to how he feels and how confident he is on that foot.

The returns of Drake Jackson and Mauga to the linebacker position are big. The Trojans have two capable outside linebackers in addition to Jackson, with Hunter Echols and Abdul-Malik McClain, but Jackson has shown that he’s a budding superstar as a defensive edge player. The Trojans will need all hands on deck when it comes to pass rushers and players who can bring the quarterback down when they face Arizona State and quarterback Jayden Daniels to open the season.

Mauga rejoins the competition at middle linebacker, where sophomore Ralen Goforth has been running unopposed with the starters in his absence. That could be a position where both players could see time this season, but Mauga’s experience will be needed.

USC is loaded at the top of the wide receiver depth chart, but it’s not a position that goes beyond the first handful of guys. Bru McCoy is expected to make the leap up to join Amon-Ra St. Brown, Tyler Vaughns and Drake London. And John Jackson III is another potential weapon. But beyond that, the true freshmen in Bryant and Josh Jackson have a real chance to make an impact this season. Bryant especially is someone who has been called out by coaches and players alike as a guy who could make some plays for USC this season. Helton said he is hopefully anticipating Bryant back in the fold for next week’s game.