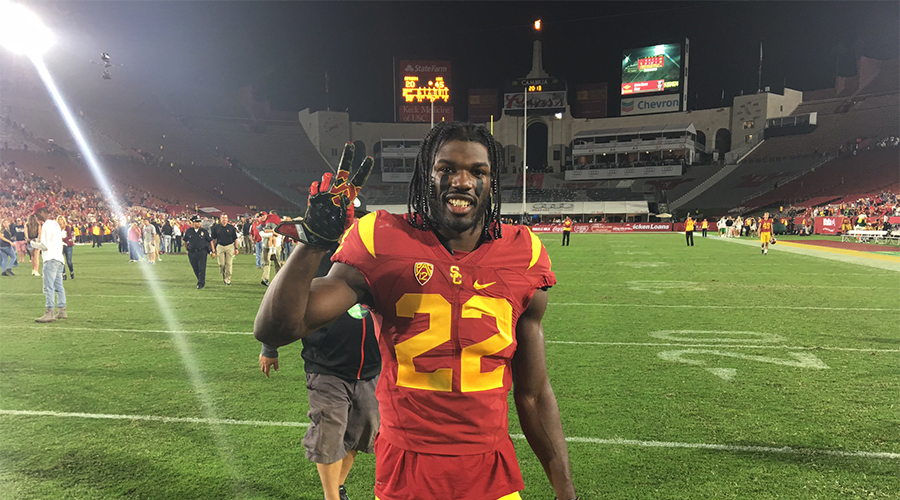 The Trojans didn’t waste on time on Saturday in their matchup with Oregon in the Coliseum, scoring the first 17 points of the contest before running away with a 45-20 victory.

The game featured standout performances by the USC defense, quarterback Sam Darnold, wide receiver Deontay Burnett and tailback Ronald Jones II, the latter of whom racked up an impressive 171 yards on the ground, and he became the first Trojan to rush for four touchdowns since 2005 when LenDale White accomplished the same feat against Arizona.

Jones scored two of those touchdowns in the first quarter, the second of which gave the Trojans their 17-0 lead. At the time of that score USC had outgained Oregon by a staggering 121 yards to 12.

The Ducks did regroup, with receiver Charles Nelson scoring on a 25-yard end-around, but the Trojans answered just before the end of the first half as Darnold hit Burnett for a two-yard touchdown to give USC a 24-6 lead at the break. Burnett would finish the night with a team-best seven catches for 87 yards.

Jones set the tone for the second half right off the bat, breaking loose for a thrilling 66-yard touchdown run on the Trojans’ first possession.

For the night, Darnold completed 28 of 40 passes for 309 yards and two touchdowns with one interception.

Herbert completed 18 off 33 passes for 162 yards and one touchdown for the Ducks.

The Trojans completely stymied Oregon’s tailback duo of Royce Freeman and Tony Brooks James, limiting them to a total of 63 yards rushing on 18 carries.

Inside linebacker Cameron Smith led USC with eight tackles. Porter Gustin was a force from his outside linebacker spot, compiling four tackles – 1.5 for a loss – and two pass break-ups.

The Trojans outgained the Ducks in total yardage 579-288.

On a down note, Clay Helton’s team was penalized a total of 13 times for 129 yards.

The Trojans have now won five consecutive contests, and they improve to 6-3 overall, and 4-2 in Pac-12 play.

Up next for USC is a tough Washington team on the road on Saturday, Nov. 12.