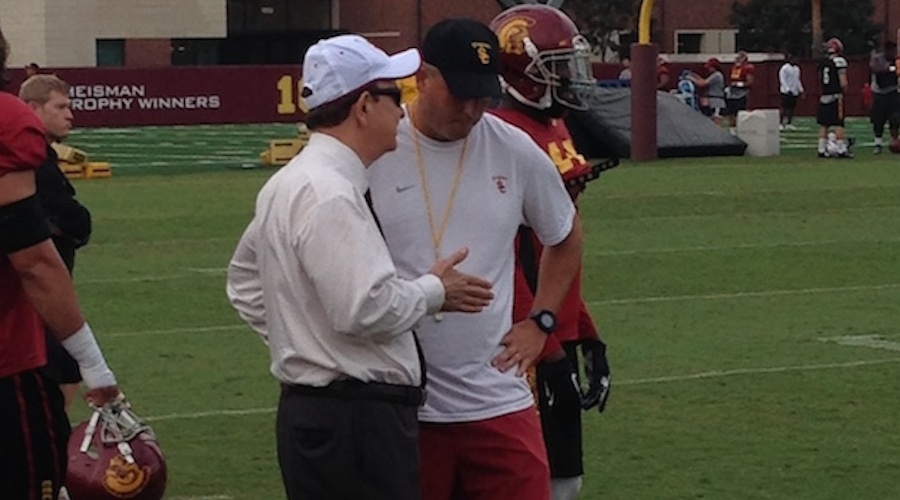 After a tumultuous week at USC in which Steve Sarkisian was fired, with Clay Helton assuming the role of interim head coach, the Trojans fought back from an early 14-point deficit on Saturday night, only to fade down the stretch  and wind up on the losing end of their rivalry matchup with No. 14 Notre Dame, 41-31.

With the USC defense struggling, The Fighting Irish offense averaged a gaudy 27.8 yards per play in the first quarter, and the Trojans found themselves trailing 24-10 following a Justin Yoon field goal mid-way through the second quarter.

USC seized momentum at that point, however, with the Trojans scoring 21-straight points that came on a Jalen Green to JuJu Smith-Schuster 75-yard double-pass touchdown play, as well as Cody Kessler TD tosses to Adoree’ Jackson and Taylor McNamara.

But the Trojans’ good times didn’t last long. Down 31-24, the Notre Dame offense was able to exploit the USC defense both through the air and on the ground, putting together a nine-play 90-yard drive that was capped off by a C.J. Prosise (19 Rush, 143 Yds, 2 TD) six-yard touchdown run that tied that game at 31-31 early in the fourth quarter.

Notre Dame took a 38-31 lead when DeShone Kizer (15-of-24, 227 Yds, 2 TD) hit Corey Robinson for a 10-yard touchdown, and the Fighting Irish defense came up with two huge turnovers late, with KeiVare Russell and Max Redfield picking off Cody Kessler on consecutive drives. Russell’s interception was converted into another Yoon field goal.

Kessler completed 30 of 46 passes for 365 yards and two touchdowns with the two interceptions in the loss, and USC generated 590 yards of total offense, compared to Notre Dame’s 476 yards. Smith-Schuster led the Trojans receivers with six receptions for 139 yards and one touchdown.

The Trojans were penalized 10 times for 105 yards in the game, compared to 4 penalties for 40 yards for Notre Dame.