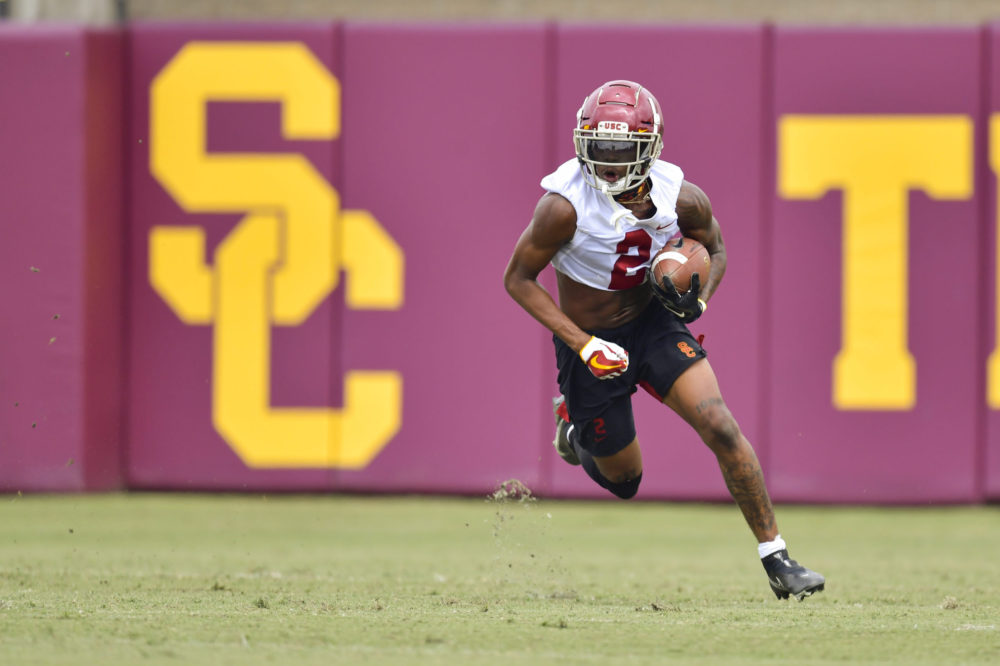 USC players have spoken at length regarding their excitement about playing in this new Todd Orlando defensive scheme, and USC cornerbacks seemed particularly thrilled both with the new system and position coach Donte Williams.

Olaijah Griffin and Chris Steele on Wednesday both made some big claims and predictions about the upcoming season, but not before reflecting on what might make this season different from last year, when the Trojans allowed more than 400 yards per game, finishing 76th overall in yards per game allowed.

The USC defensive coaches have consistently mentioned physical practices, and that seems to be something that is happening this fall. Steele mentioned that he heard plenty of that from defensive coordinator Todd Orlando, so it wasn’t a surprise when they were asked to turn things up a notch once the pads came on.

“The biggest different that I’ve seen in comparison to last year would be the physicality, for sure,” Steele said. “And the energy level that comes through at practice. Last year everything was kind of toned down, but this year all the coaches come out with a lot of energy and everybody really competes like it’s a game. We really treat practice like it’s a game.”

“Last year we weren’t really physical so we didn’t get the feel of hitting,” he said. “We know how to hit and be physical, but now just getting the feel of the physicality in practice, going against each other. It’s just helping us.”

Griffin and Steele are part of a unit that might be facing the biggest challenge in any given practice. They’re lined up across the USC’s stable of terrific wide receivers. Both cornerbacks mentioned Tyler Vaughns, Amon-Ra St. Brown and Bru McCoy as difficult covers, and Steele tossed true freshman Gary Bryant Jr. into that mix, though he’s out with an injury right now.

Cornerbacks coach Donte Williams said the position group is still improving, and that without spring practice, today marks just the 11th practice for the unit and Williams together. But Williams likes what he sees to this point.

Cornerbacks are typically not lacking in confidence due to what the position entails, and both Griffin and Steele are ready to put their hard work and natural talent on display this season.

“I think we’re embracing that challenge by dominating on the field and showing what we’re about,” Griffin said. “A lot of schools and a lot of people don’t think that USC is a DB school, but I think we’re going to change that to a new DBU.”

Williams had plenty of success during his stint at Oregon, turning several Ducks defensive backs into some of the top corners in the conference. Steele sees that potentially continuing, but now with the Trojans.

“I feel like we definitely don’t have the respect that we want, so we’re definitely embracing that challenge and we’re ready to show the Pac-12 that we’re the best DB corps in the country,” he said.

Williams acknowledged that his group is both competitive and prideful, and said it’s his job to get them mentally prepared for each and every opponent to where the technique and schematic aspects are second-nature, and the corners can go play how they want to play.

“Olaijah definitely likes the show,” Williams said. “He’s an entertainer, so if you like the show, nobody wants to go to the show and get booed. He’s going to make sure that he puts on a show every week…And Chris is definitely, definitely competitive. Chris is one of those guys that wants to show everybody that there’s 22 people on the field at a time, playing 11-on-11, and that’s he’s the baddest dude on the field.”

Griffin and Steele have been working together this fall, with Griffin playing field corner and Steele at boundary. Williams said he likes having his cornerbacks switch sides of the field depending on where the ball is placed because each position requires different mindsets and abilities.

“I look at them as different people,” he said. “The field, to me, is the guy who has to adjust after the ball is snapped, pretty much be a playmaker because after the ball is in the air, he becomes a receiver. The things I ask him to do are a little different. The Boundary corner, to me, is going to be a little more press, playing a little tighter quarters, maybe playing against a bigger receiver, having to fit in the box and a lot of his adjustments happen before the ball is snapped, where the communication is almost like a safety.”

Williams said that in addition to Griffin and Steele, he’s seen positive improvements from Isaac Taylor-Stuart, Dorian Hewett and Jayden Williams. Though he added that the depth overall isn’t great because guys are not available at multiple positions due to concentrating on one spot.

It’s easy to tell Griffin and Steele have totally embraced the switch to the new defense and to their new position coach. Williams recruited many of USC’s defensive backs during his previous stops and already had a very strong relationship with Steele–whom he earned a verbal commitment from while at Oregon. But Williams in the third position coach in three years for Griffin, and actually the fourth position coach in just two years for Steele. But both have shrugged off the constant change and have embraced what’s in front of them this season.

“Right now I’m in the most comfortable position I’ve been in all three years,” Griffin said.

“Having him is a true blessing for me,” Steele said. “Everybody knows the relationship I have with him. Having somebody on staff with us that really cares about his players the way he does. You can definitely tell the difference in the DB room this year.”