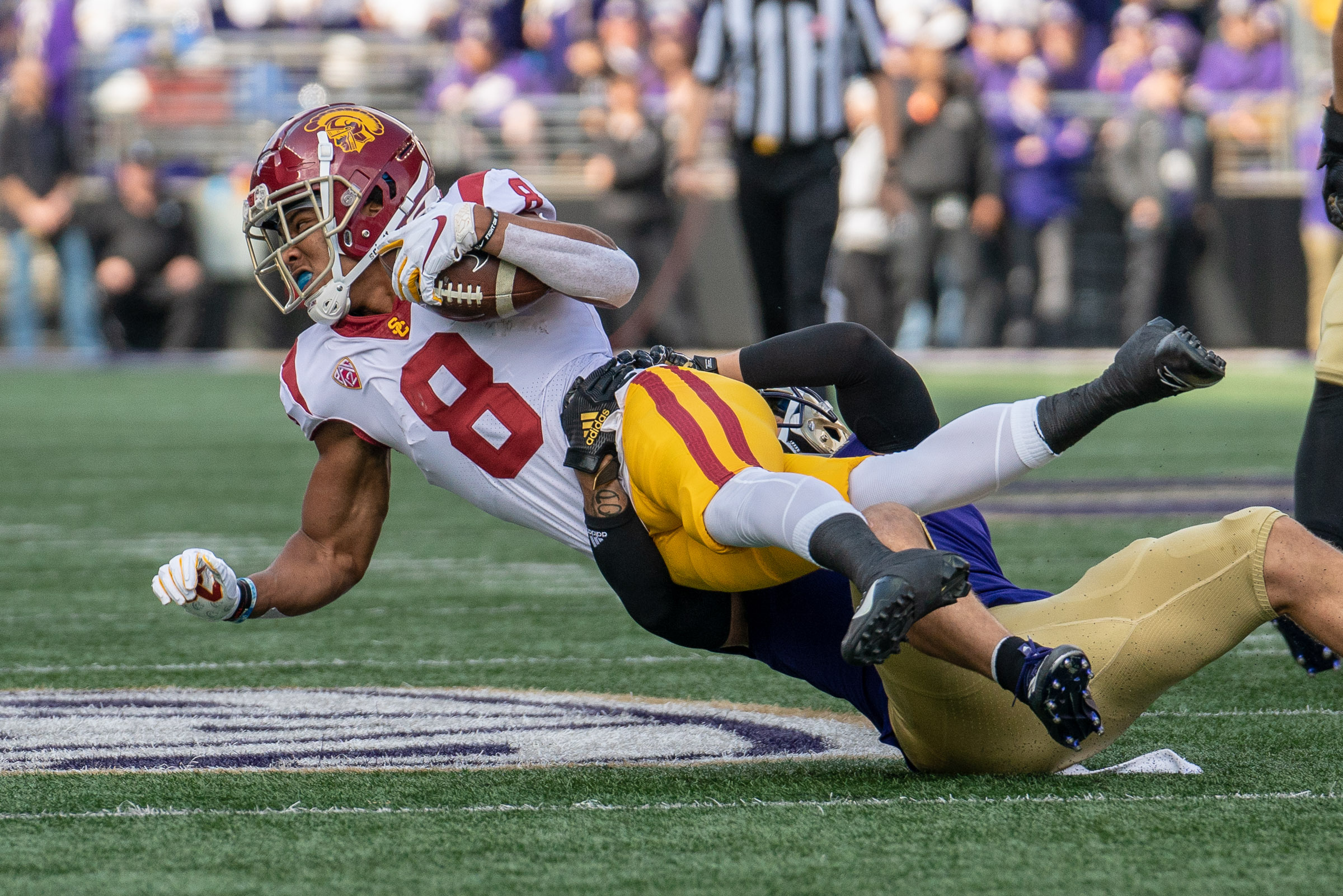 For the second time this season, the clock struck midnight on a USC backup quarterback on the road. One week after Matt Fink torched the Utah defense at home, the Washington Huskies had just about all the answers for Fink and the USC offense in a 28-14 win.

Fink got the start when Slovis was officially declared out late in the week, due to a concussion suffered against the Utes. Fink finished the game 19-of-32 for 163 yards, a touchdown and three interceptions.

Those three picks helped tell the final story, as the first two turned into Washington touchdowns, the second coming as the Trojans were knocking on the door of scoring a touchdown of their own, and the third closing the door on any ability for a Trojan comeback.

USC played hard, and it’s tough to find any fault in the effort the Trojans brought with them to the field in Seattle, playing with their third-string quarterback and without two of their best defensive players. But an opportunistic Washington team took advantage of virtually every USC mistake throughout the game.

Washington got on the board first when a 35-yard punt allowed the Huskies to set up at the USC 35-yard line and score five plays later. Following a Fink interception two plays later, Washington stretched the lead to 14-0 on a four-play drive that only needed to cover 38 yards, and resulted in a touchdown when wide receiver Andre Baccellia jumped on a fumble in the end zone.

In the third quarter, with the Trojans trailing 20-7, USC had an opportunity to cut into the Washington lead, but Fink was intercepted at the goal line. Two plays later, Husky running back Salvon Ahmed took off for an 89-yard touchdown when Chase Williams, filling in for an injured Talanoa Hufanga, missed a tackle in the hole at the line of scrimmage.

After USC cut the lead to 28-14 on a 44-yard touchdown pass from Fink to Pittman, the Trojan defense did everything it needed to do to help USC complete the comeback. But the offense came up empty time after time.

USC forced three punts and recovered a fumble over the next four Washington drives, but the Trojan offense responded with two three-and-outs, a turnover on downs, and an interception. The interception allowed the Huskies to run out the clock on the 14-point win.

The USC running game was strong, as the Trojans ran for 212 yards on 33 carries. But it still never felt like offensive coordinator Graham Harrell went to it as often or as consistently as he could have, as the Trojans gained 6.4 yards per rush and just 5.1 yards per pass.

Stephen Carr led the way with 94 yards on just seven carries. And this was the most action for Markese Stepp this season, as he chipped in 10 carries for 62 yards.

A string of USC drives that will be dissected came at the start of the fourth quarter. Having cut the lead to 28-14 and forcing a Washington punt, the Trojans took over at their own two-yard line and went three-and-out. The third down play was a deep ball down the sideline to a well-covered Tyler Vaughns.

After another Washington punt, USC drove the length of the field and eventually called a fourth-down pass that saw Fink try to loft a ball toward true freshman Drake London against Washington’s best defender, safety Myles Bryant. The ball fell incomplete and the Trojans wouldn’t come close to scoring again.

Defensively, the Trojans held standout Washington quarterback Jacob Eason to 16-for-26 for 180 yards. And while Ahmed ran for a career-high 153 yards, Washington ran for just three yards per carry outside of his 89-yard scamper.

Fink showed off his skills and his deficiencies at quarterback. His legs got the Trojans on the board early with a short touchdown run. But an errant throw led to his first interception, and then staring down a receiver led to his second.

St. Brown led the Trojans with five receptions, while Pittman led the way with 64 yards receiving.

USC had eight penalties for 80 yards, including penalties after a recovered fumble and a touchdown.

USC committed at least one turnover for the 13-th consecutive game.

True freshman nickelback Max Williams forced the fumble at the goal line that was eventually recovered for a Washington touchdown.